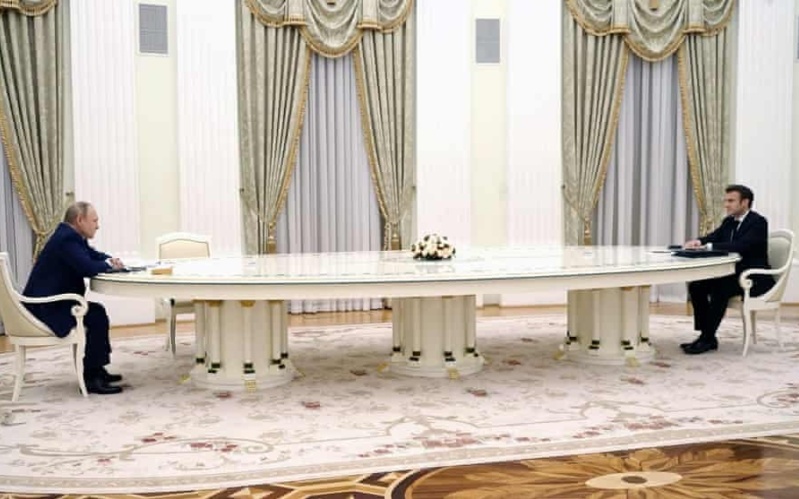 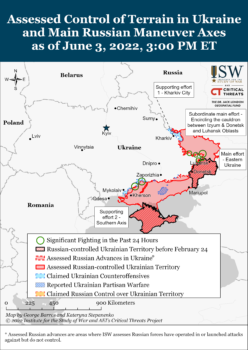 The Guardian posts video of the aftermath of Russian shelling of the city of Lysychansk, which — along with the nearby city of Sievierodonetsk — are the major cities still under Ukrainian control in the Luhansk region of eastern Ukraine. The clip shows damaged administrative buildings, residential buildings, and roads, with the burning to the ground of the headquarters for distributing humanitarian aid.

Officials said that they have completed a “criminal investigation” of UK nationals Sean Pinner and Andrew Hill and Morocco national Saadoun Brahim, and that the three men may face the death penalty for fighting with the Ukrainian Armed Forces. The Russian proxies said the “first court hearing” will take place soon.

Russian State TV put Pinner on display after he and fellow UK citizen Aidan Eslin were captured in mid-April while defying the Russian assault and siege of Mariupol in southern Ukraine.

Local sources say Ukrainian defenders now control 40% to 60% of Sievierodonetsk in eastern Ukraine after pushing back a Russian offenisve.

Several #Ukraine🇺🇦 sources have now confirmed to me that while #Russia🇷🇺 troops did force their way into Sieverodonetsk, the city's defenders deliberately allowed them to overextend themselves before launching the counteroffensive that's so far seen c.20% of the city recaptured.

In his nightly video address to the nation, Ukraine President Volodymyr Zelenskiy said Russian attacks have destroyed or damaged 113 churches: “Some survived World War II, but did not withstand Russian occupation.”

On Saturday, Russian shelling set on fire and severely damaged the Skete of All Saints of Svyatohirsk Lavra, a church in Donetsk in eastern Ukraine built in 1526.

Four people were killed among the 300 sheltering in the church.

Donetsk Governor Pavlo Kyrylenko said six civilians were slain and nine wounded across the region on Saturday, not counting any casualties in Mariupol and Volnovakha.

Mayor Vitaly Klitschko reported attacks on infrastructure in the Darnytskyi and Dniprovskyi districts, with no fatalities so far and one person hospitalized.

Tne Ukraine military said Russia launched missiles from Tu-95 aircraft from the Caspian Sea. The regional military administration said said one “enemy missile was shot down over Obukhiv district by air defense forces”. It asked residents to remain in shelters.

Energoatom, Ukraine’s nuclear power operator, said a Russian cruise missile flew “critically low” over the South Ukraine Nuclear Plant: “It’s probable that was the missile that was fired in the direction of Kyiv.”

The Russians have also attacked two sites in Kramatorsk in the Donetsk oblast in eastern Ukraine. No casualties are reported.

Ukraine’s International Legion reported on Saturday that four members — one each from the Netherlands, Australia, Germany and France — have been killed.

Dutch media had reported that Vogelaar, 55, was killed by artillery fire near Kharkiv last month. O’Neill, 47, was a humanitarian worker slain in late May.

Blériot, 32,appeared in a documentary in early March, telling the Argentinian publication Clarin that he was “ready to die” as he departed from Poland.

Saying he had spent “a year in the French army”, he cried when he talked about his two young children.

ORIGINAL ENTRY: Ukraine’s Zelenskiy Government has rebuffed an offer by French President Emmanuel Macron to mediate between Kyiv and Moscow, and rejected his call not to “humiliate” Russia.

Presidential advisor Mykhailo Podolyak said on Saturday, “Until we receive weapons in their full amount, until we strengthen our positions, until we push them back as far as possible to the borders of Ukraine, there is no point in holding negotiations.”

Calls to avoid humiliation of Russia can only humiliate France and every other country that would call for it. Because it is Russia that humiliates itself. We all better focus on how to put Russia in its place. This will bring peace and save lives.

Before and during the Russian invasion of Ukraine, Macron has tried to position himself as the world’s intermediary with Vladimir Putin, visiting Moscow. But he was unsuccessful in deterring Putin from the assault or from limiting military operations in the initial phase of the invasion.

The President tried again in an interview with French newspapers: “We must not humiliate Russia so that the day when the fighting stops we can build an exit ramp through diplomatic means. I am convinced that it is France’s role to be a mediating power.”

In contrast to a series of other leaders — some of whom have criticized his journeys to Moscow and public statements — Macron has not visited Kyiv before or during the invasion.

Russia’s last-gasp offensive in eastern Ukraine, following Moscow’s failure to topple the Zelenskiy Government and withdrawal from the north, has given Macron another opening for his diplomacy.

But in recent days, Ukraine has checked even the limited objectives of Russia in the Donbas, reclaiming 20% of the embattled city of Sievierodonetsk.

Luhansk Governor Serhiy Haidai said Russia is “throwing all of its reserves” into the battle and blowing up bridges to prevent Ukraine from bringing in reinforcements. He challenged an assessment by the UK Defense Ministry that the Russians will probably control all of the Luhansk region in the next two weeks, saying there are enough Ukrainian troops to defend positions.

The US-based Institute for the Study of War said Ukrainian forces probably are “more degraded” than Haidai indicates, but defenses “remain strong”.

Ukrainian forces are successfully slowing down Russian operations to encircle Ukrainian positions in Luhansk Oblast as well as Russian frontal assaults in Severodonetsk through prudent and effective local counterattacks in Severodonetsk and their defense of the western Siverskyi Donets riverbank.

Russia is also reportedly suffering heavy losses, including — according to a Russian military blogger — the destruction of all of its 35th Combined Arms Army in Izyum in northeast Ukraine due to incompetent command.

Izyum is a strategic city used by Russia as a staging post for the invasion of the Donbas. Ukrainian forces have reportedly taken territory in the area, putting pressure on supply lines for the Russian offensive.

The Institute for the Study of War noted in its latest report, “Russian forces launched a series of unsuccessful offensive operations southwest of Izyum and in the Lyman area.”

Vladimir Putin swept aside the reports that another phase of his invasion had been checked. He insisted on Saturday, “Our anti-aircraft systems are crunching [Ukrainian weapons] like nuts. Dozens have been destroyed.”