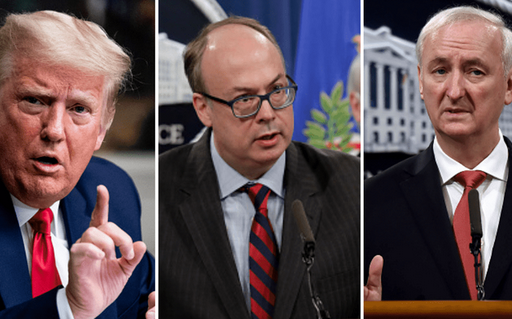 The latest hearing of the House select committee on the Capitol Attack has documented Donald Trump’s pressure on the Justice Department to support his coup attempt, overturning the November 2020 election with false claims of vote fraud.

With testimony from top officials, the Committee set out the third phase of Trump’s attempt, following his failed legal challenges and his unsuccessful pressure on State legislatures and officials to throw out Joe Biden’s victory and his electors.

Trump and his inner circle initially tried to get Attorney General William Barr, who had protected Trump since being appointed in January 2019, to declare fraud. When Barr resigned, saying Trump’s claims were “bullshit”, they discussed the seizure of voting machines and strong-armed Acting Attorney General Jeffrey Rosen and his deputy Richard Donoghue.

When Rosen and Donoghue, the Trump camp tried to install a loyalist, Justice Department official Jeffrey Clark, as Acting Attorney General. That initiative was checked by the threat of mass resignations by senior officials at the Department.

Throughout December and all the way to January 6, the date of Congressional certification of Biden’s Electoral College victory, Trump and his inner circle pushed conspiracy theories about a stolen vote. Trump insisted there was no need for evidence, telling the Justice Department, “Just say the election is corrupt and leave the rest to me.”

On January 3, White House call logs referred to Clark as Acting Attorney General, anticipating Trump’s successful dismissal of Rosen and installation of the man who would declare the election invalid.

Rosen testified that at an Oval Office meeting later that day:

Trump dismissed the concern. “What do I have to lose?” he asked, according to Acting Deputy Attorney General Donoghue.

The Plot and the GOP Legislators Who Sought Pardons

The committee also documented how at least six Republican members of the House, having been involved in the scheme to overturn the election, sought pardons for themselves and any other Republican who rejected Biden’s electoral votes.

Perry was involved in the plot over the Justice Department. He introduced Clark to Trump, a day after he and other Republicans were in a White House discussion on how to block Biden’s victory. The Pennsylvania legislator asked Meadows to ensure that Trump installed Clark as Acting Attorney General, and he pressed Donoghue to give Clark the capability to “do something” about “fraud”.

Laying the ground for the scheme, Clark — the head of the Department’s Environmental and Natural Resources Division and acting head of the Civil Division — told Rosen to send a letter to Georgia election officials, lying that the Department had “identified significant concerns” affecting the swing state’s results.

In a video deposition, White House lawyer Eric Herschmann said he told Clark, “Congratulations, you just admitted your first step or act you’d take as attorney general would be committing a felony.”

Donoghue told Clark, “You’re an environmental lawyer. How about you go back to your office, and we’ll call you when there’s an oil spill?”

Rosen and Donoghue also had to stave off the Trump camp’s conspiracy theories.

Trump’s lawyer Sidney Powell pushed the falsehood of a plot to switch votes to Biden involving the manufacturers of voting machines, Biden, leaders of 10 Democratic cities, the late Venezuelan leader Hugo Chavez, the financier and philanthropist George Soros, “Antifa”, Cuba, and China. She also declared that Italian defense contractors had used satellite technology to flip votes to the Democrat.

After watching a video on “Italygate”, Donoghue wrote of its “pure insanity”. He told the committee a that it was “patently absurd”.

Defying the rejection, Trump pressed for the appointment of Powell as a special counsel to investigate the supposed fraud and for the seizure of the voting machines.

The committee will hold two more hearings in July, examining the fourth phase of Trump’s plot: the scheme to block Congressional certification of Biden as President-elect on January 6. It will detail how, with Vice President Mike Pence refused to carry out the plan, Trump’s supporters attacked the Capitol to block the process.