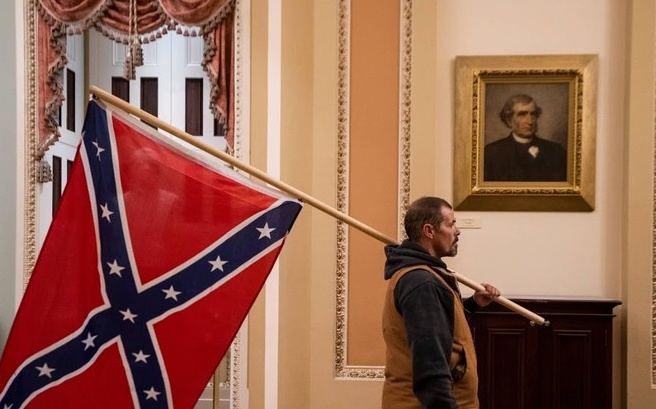 A Trump supporter carries a Confederate flag through the US Capitol, January 6, 2021 (Mike Theiler/Reuters)

I spoke further with China Radio International on Wednesday about the latest House hearings on the Capitol Attack and Donald Trump’s coup attempt.

I review the evidence presented so far, and discuss the significance for American democracy and the US system.

Will Trump supporters see the reality? I don’t know. There are so many who have been entrenched in the rhetoric, the misinformation of Donald Trump for years that it may be hard for them to see.

But that’s not the point here. The objective is not to convince Trump supporters; it is to ensure accountability.

Because if you don’t have accountability, given this was effectively a coup attempt, someone who is not Donald Trump can try to do this….

The American system has bent, but it has not broken.

ORIGINAL ENTRY, JUNE 22: I joined Monocle 24’s Emma Nelson on Wednesday to analyze the latest hearing of the House committee on the Capitol Attack, including Donald Trump’s attempt to retain power through “fake electors” and his intimidation, with incitement of violence, of State officials and election workers.

I put this in the context of Trump’s coup attempt, beginning with Trump’s falsehoods about the 2020 election and continuing all the way to the Capitol Attack on January 6, 2021.

We look ahead to the next set of hearings and consider whether they will make a difference over accountability and the threats to America’s democracy and political system.

This wasn’t just Trump having thought bubbles on Twitter about “Stop the Steal”.

This involved Trump, his lawyers like Rudy Giuliani, some Republican legislators, and Trump’s Chief of Staff Meadows — for weeks, they pursued this alternative of “If the courts won’t give us what we want, then we will make sure state legislatures do.”

That plotting continued all the way to January 6. When the states refused, they tried to get the Justice Department to overturn the election. When it refused, they came up with the ultimate plot: if Mike Pence won’t stop the steal, then we’ll get our supporters to do it themselves.

On the intimidation of state officials and election workers by Trump and his supporters:

Before his incitement to violence on January 6 with the attack on the Capitol, Trump is accused — with a great deal of evidence — of inciting violence against individuals who wouldn’t do what he wanted.

EA Video Special: The Capitol Attack and the Breakdown of US Political Culture

And on the state of the US system:

Looking into the future, if you don’t have accountability for what Trump and his inner circle did, someone who is not named Trump can try to do the same thing.