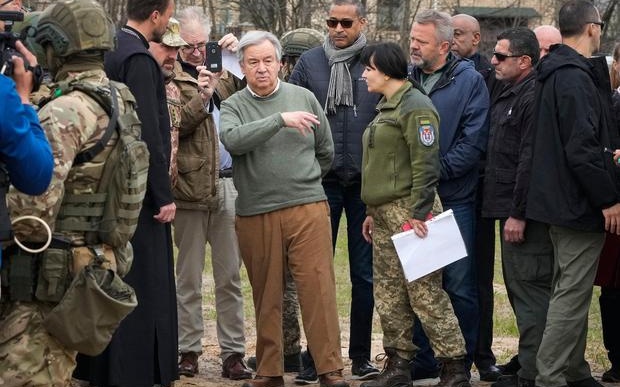 UN Secretary-General António Guterres stands at the side of a mass grave in Bucha, northwest of Ukraine’s capital Kyiv, where occupying Russian forces killed hundreds of civilians (Efrem Lukatsky/AP) 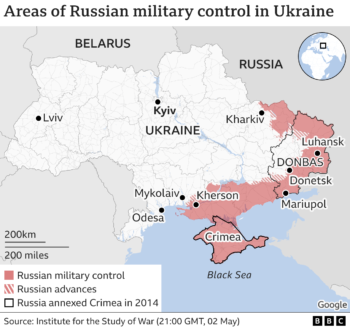 Russia forces have destroyed a museum with the works of the 18th century philosopher and poet Hryhoriy Skovoroda.

The Russians shelled the roof of the museum in the Ukrainian village of Skovorodynivka, injuring a staff member and starting a fire.

The most valuable items had been moved earlier to a safer location.

H. Skovoroda is known not only in 🇺🇦, but also worldwide. More people will be interested in his philosophy and visit his museum after restoration. Boards and bricks may be destroyed, but not ideas. No one has done more to promote 🇺🇦 culture than the Kremlin's "strategists". pic.twitter.com/oD1v7MYlk7

The Operational Command said there were no casualties.

Russian missiles also targeted the Myropilske and Khotin municipalities in the Sumy region in northern Ukraine.

On Friday, the Ukraine Government’s social media site Dumska claimed that an anti-ship misslle struck a Russian frigate was near Zmeyny Island. A Ukrainian MP said the stricken warship was the missile frigate Admiral Makarov, commissioned in 2016, which has been operating in the western Black Sea for more than a month.Ukrainian forces say they have destroyed nine Russian warships during the invasion.

The Ukraine military says Russian forces have begun the demolition of bridges to check a Ukrainian counter-offensive in the northeast.

Ukrainian forces have regained several villages near the country’s second city Kharkiv and the city of Izyum, the staging area for Russia’s offensive into the Donbas.

The office said that 10,257 cases have been logged. It added that at least 223 children have been killed and 633 injured, noting that the actual number is likely to be far higher.

Italian authorities have impounded a superyacht, the Scheherazade, reportedly owned by Vladimir Putin.

The Italians acted after signs that the 459-foot yacht, worth almost $700 million, had prepared to sail and avoid seizure.

Police boarded the yacht, with its two helicopter decks, a gym, and a swimming pool convertible into a dance floor. They told the crew that the ship would not be moving.

The Italian Finance Ministry said an investigation established that the ship’s owner “threatened peace and international security” and that his actions amounted to the “undermining or threatening the territorial integrity, sovereignty and independence of Ukraine.”

The conflict in Ukraine is taking a heavy toll on some of Russia’s most capable units and most advanced capabilities.

It will take considerable time and expense for Russia to reconstitute its armed forces following this conflict.

It will be particularly challenging to replace modernised and advanced equipment due to sanctions restricting Russia’s access to critical microelectronic components.

The UK Defence Ministry said at least one T-90M, Russia’s most advanced tank which was introduced in 2016, has been destroyed in fighting.

Eleven women and a cleric are among 41 Ukrainian soldiers and civilians freed in the latest prisoner exchange with Russia, Ukraine Deputy Prime Minister Iryna Vereshchuk said on Friday.

Vereshchuk did not say how many Russian troops were released.

ORIGINAL ENTRY: In its first formal statement on Russia’s assault on Ukraine, the UN Security Council has expressed its “deep concern”, but has not referred to a “war”, “invasion”, or even “conflict”.

The Council President for May, the US Ambassador Linda Thomas-Greenfield read the adopted text, drafted by Norway and Mexico.

The Security Council expresses deep concern regarding the maintenance of peace and security of Ukraine.

The Security Council recalls that all Member States have undertaken, under the Charter of the United Nations, the obligation to settle their international disputes by peaceful means.

The members expressed “strong support” for Secretary-General António Guterres’s efforts to find a peaceful solution, and asked him “to brief the Security Council in due course”.

Russia is a permanent Council member with veto power.

Briefing the Security Council on Thursday, Guterres went much farther in the depiction of Vladimir Putin’s war:

I said the same thing in Moscow as I did in Kyiv….Russia’s invasion of Ukraine is a violation of its territorial integrity and of the Charter of the United Nations.

It must end for the sake of the people of Ukraine, Russia, and the entire world…the cycle of death, destruction, dislocation and disruption must stop.

Despite the limited nature of the statement, Guterres cheered, “Today, for the first time, the Security Council spoke with one voice for peace in Ukraine.”

Last week Putin lied to Guterres’ face during the Secretary-General’s visit to Moscow. The Russian leader said that “there are no [Russian military operations” in devastated and besieged Mariupol in southern Ukraine. He denied the mass killing of hundreds of civilians in Bucha, northwest of Kyiv, by Russian troops in March, insisting that it was a “provocation…something the Russian side had nothing to do with”.

Mexico’s UN Ambassador Juan Ramon De La Fuente responded to criticism that the formal statement was too weak: “[It is] a very first initial step but it points on the right direction”.

48 Civilians Get Out of Azovstal Plan in Mariupol

Russian forces finally allowed the departure of another 48 civilians, including children, from the besieged Azovstal steel plant in Mariupol on Friday.

Russian State media said 48 civilians were transferred in three buses to the village of Bezimenne in the Russian proxy area of Donetsk in eastern Ukraine. They claimed a fourth bus was departing last night, but there was no confirmation from the Red Cross or UN, which accompanied the evacuees.

Russia permitted the departure of about 180 civilians last weekend — about 80 to Bezimenne and about 100 to Ukraine-controlled Zaporizhzhia — but then blocked more evacuations and stepped up shelling and bombing of Azovstal.

Speaking to London’s Royal Institute of International Affairs on Friday, Ukraine President Zelenskiy said the Russian siege of Mariupol is “an example of torture and starvation used as a weapon of war”.

In his late-night speech to the nation, he said rescue had been organized for more than 40 civilians in parts of the city outside Azovstal: “Women and children. We hope that soon they will be able to arrive in a safe area after two months of shelling, just underground — in shelters.”

US Allocates Another $150 Million in Military Aid to Kyiv

US Secretary of State Antony Blinken has announced another $150 million in military aid to Ukraine.

I have authorized $150 million in additional U.S. arms, equipment, and supplies for Ukraine to reinforce its defenses to counter Russia’s offensive in the East. We stand #UnitedwithUkraine.

The US has now provided about $3.8 billion in military assistance and financing, including the provision of heavy artillery, anti-tank and anti-air missiles and high-tech attack drones, to Kyiv.

The Americans have also trained 220 Ukrainian troops in the use of howitzer systems, with another 150 receiving instruction.