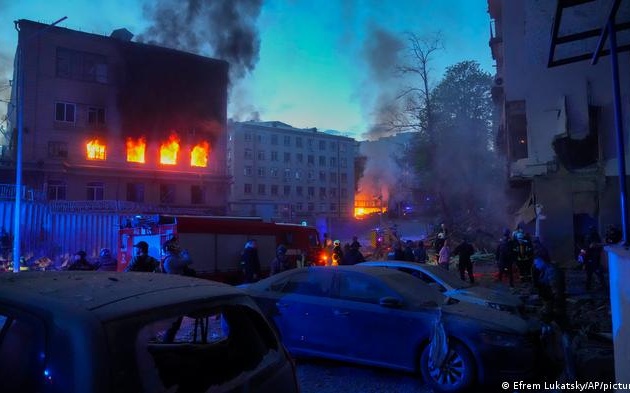 EA on BBC and RTE: Holding Back Russia in Ukraine

Ukraine Presidential advisor Oleksiy Arestovych has said of Russia’s offensive in the east of the country, “We have serious losses, but the Russians’ losses are much much bigger….They have colossal losses.”

A commander inside the Azovstal steel plant in Mariupol in southern Ukraine says Russia has tightened its siege by striking the complex’s field hospital.

Serhiy Volyna, the leader of the 36th Marine Brigade, said:

The operating theatre was hit directly. And all the operating equipment, everything that is necessary to perform surgery has been destroyed so right now, we cannot treat our wounded, especially those with shrapnel wounds and with bullet wounds.

We are looking after the wounded right now with whatever tools we have. We have our army medics and they’re using every skill they have to look after the wounded. And right now, we don’t have any surgical tools but we have some basics. But also, we are in dire need of medication. We have almost no medication left.

Volyna said hundreds of civilians are still trapped. Among them are 60 young people, including a 4-month-old infant.

He said that, in addition to the lack of medical care, there is “very little water, very little food left”.

Russian troops have shelled an important railway hub and supply line in the town of Lyman in eastern Ukraine.

Donetsk Governor Pavlo Kyrylenko said the Russians are trying to move south from the region towards Lyman, a few miles from the city of Sloviansk, but “the enemy cannot break through. Lyman city is under the Ukrainian Armed Forces control.”

Norway has joined other countries closing borders and ports to Russian trucks and ships.

Paul Urey and Dylan Healy were detained at a checkpoint near Zaporizhzhia on Monday, said the UK-based non-profit agency Presidium Network.

The Britons were trying to rescue a Ukrainian family from a village south of the city. They had negotiated for six hours to get through the last Ukrainian checkpoint and into Russian-occupied territory.

Ukraine President Volodymyr Zelenskiy has described how Russian special forces came close to capturing him and his family.

Zelenskiy told Simon Shuster of Time magazine about the start of the Russian invasion on Februrary, with bombing of Kyiv.

As he and his family prepared to move of their home in the government district, the Ukrainian military said Russian teams had parachuted into the capital seeking to detain or kill him.

By nightfall, there were gunfights around the government quarter. Guards cut the lights and brought bulletproof vests and assault rifles for Zelenskiy and about a dozen of his aides, as Russian troops made two attempts to storm the compound.

The assault was repulsed, and the following night Zelenskiy —- having refused an evacuation by US and UK forces, “I need ammunition, not a ride” — walked outside the courtyard to record a video message for the nation.

A second civilian killed in Russia’s missile strikes on Kyiv has been identified as journalist Vera Girich.

Girich was slain in her apartment on the second floor of a building next to the Artem factory, which makes aircraft parts and air-to-air guided missiles.

Six people are hospitalized with injuries and carbon monoxide poisoning caused by the explosion and subsequent fire.

A civilian has been killed in Russia’s missiles strikes on Kyiv on Thursday night.

Mayor Vitali Klitschko wrote on Telegram, “Friends! Rescuers who are continuing to inspect and dismantle the rubble of a residential building in the Shevchenkivskyi district, where a rocket hit yesterday, have just found the body of the deceased.”

Meanwhile, Russia’s Defense Ministry proclaimed that it destroyed the production facilities of a space-rocket plant in Kyiv. It offered no evidence for the assertion.

The Organization for Security and Cooperation in Europe has been forced to close its observer mission in Ukraine by a Russian veto.

Moscow refused an extension of the mission, in place since 2014. The OSCE said it will “take immediate steps” to close the operation.

Poland which holds the rotating OSCE chairmanship, said through Foreign Minister Zbigniew Rau that all options were pursued but “the position of the Russian Federation left us with no choice”.

The OSCE, which began its missions after Russian proxy groups seized territory in eastern Ukraine, was the only international body monitoring the conflict on the ground.

Most OSCE monitors left Ukraine after the Russian invasion on February 24. However, administrative staff remained, and four have been detained by Russian forces.

OSCE Secretary General Helga Schmid said the organization will continue to seek an “end to the detentions, intimidation, and disinformation that are so dangerous for our national mission members”.

The International Atomic Energy Agency is investigating a report of a missile flying directly over a nuclear power station in southern Ukraine.

Ukrainian officials formally told the agency on Thursday of the incident on April 16 near the city of Yuzhnoukrainsk, 350km (220 miles) south of Kyiv.

IAEA director general Rafael Grossi said, “The IAEA is looking into this matter, which, if confirmed, would be extremely serious. Had such a missile gone astray, it could have had a severe impact on the physical integrity of the NPP [Nuclear Power Plant], potentially leading to a nuclear accident.”

In its latest operational report, UK military intelligence says of Russia’s offensive in the Donbas in eastern Ukraine, “Due to strong Ukrainian resistance, Russian territorial gains have been limited and achieved at significant cost to Russian forces.”

The report noted, “Fighting has been particularly heavy around Lysychansk and Severodonetsk, with an attempted advance south from Izium towards Slovyansk.”

It is humiliating in a way. I think the international community, not just Europe, but countries everywhere, will recognise they cannot have their UN Secretary General sort of treated in this disrespectful, casual and frankly, dangerous way, by Putin and the Russian regime.

Five cruise missiles were fired. One struck the lower floors of a 25-story residential building in the central Shevchenko district, setting it on fire.

As the casualties were established, Zelenskiy and Foreign Minister Dmytro Kuleba the Russian message, the day after Guterres had seen Vladimir Putin in Moscow and was treated to a series of lies.

This says a lot about Russia’s true attitude to global institutions, about the efforts of the Russian leadership to humiliate the UN and everything that the organisation represents.

Therefore, it requires a strong response.

Russia stroke Kyiv with cruise missiles right when UN Secretary General @antonioguterres and Bulgarian PM @KirilPetkov visit our capital. By this heinous act of barbarism Russia demonstrates once again its attitude towards Ukraine, Europe and the world.

In his nightly video address to the nation, Zelenskiy said the Russian missile strikes “prove that we cannot let our guard down”.

He thanked US President Joe Biden for the confirmation, earlier in the day, that the Administration will seek a $33bn supplemental funding bill from Congress, with $20bn in military aid, $8.5bn in economic aid, and $3bn in humanitarian relief for Ukraine.

Zelenskiy said this is “salvation not only for our people — this is salvation for all of you — for all of Europe”.

Before seeing Zelensky, Guterres unwittingly foreshadowed the Russia strikes. He visited the city of Borodyanka near Kyiv, where Russian forces carried out mass killings of Ukrainian civilians. He said:

I imagine my family in one of those houses that is now destroyed and black. I see my granddaughters running away in panic.

At the joint press conference with Zelenskiy, Guterres said the Russian siege and bombardment of Mariupol in southern Ukraine is “a crisis within a crisis”, with thousands of civilians — many elderly, in need of medical care, or with limited mobility — requiring life-saving assistance.

“They need an escape route out of the apocalypse,” Guterres said.

He assured that “we are doing everything possible” to evacuate people from the Azovstal steel works, where up to 1,000 civilians are sheltering underground, and said he had intense discussions with Zelenskiy to make departure from the port city a reality.

Zelenskiy said he still believes that a “successful result” is possible “in terms of deblocking” the steel works.

But Guterres acknowledged with regret that the UN’s entreaties had had little effect in the face of Vladimir Putin’s invasion: ““Let me be very clear. The Security Council failed to do everything in its power to prevent and end this war.”

As the Secretary-General made his appeal over Mariupol, the besieging Russian forces were carrying out their heaviest strikes on the Azovstal steel works, where up to 1,000 civilians are in an underground shelter with food and supplies almost exahusted.

Donetsk regional governor Pavlo Kyrylenko explained that the Russians were refusing any evacuation of wounded defenders of the complex.