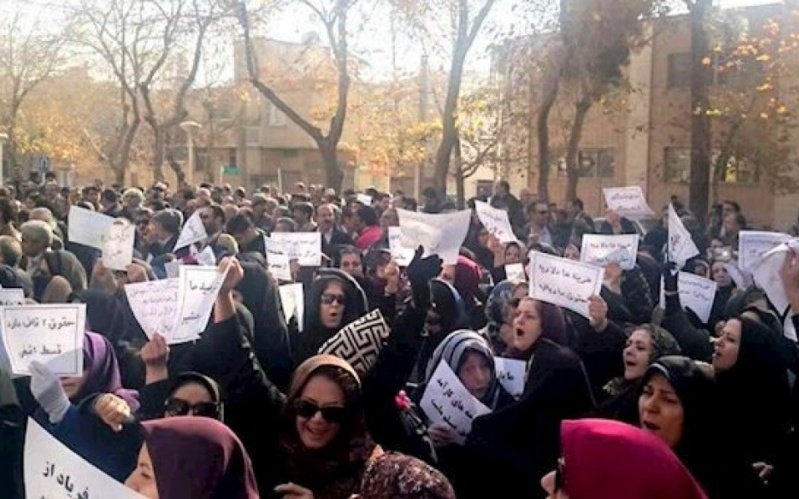 In their third month, teachers’ strikes are reportedly expanding across Iran.

The reformist newspaper Etemad describes strikes in more than 100 cities, including outside the Parliament building in Tehran and Education Ministry offices in provincial capitals such as Isfahan, Shiraz, and Mashhad.

The gatherings have persisted despite mass arrests and the pledge of Iranian legislators that a new system will be implemented after Iran’s New Year in late March.

The latest demonstrations called for the freeing of detained teachers.

ORIGINAL ENTRY, DEC 15: Teachers have been striking across Iran for better pay and conditions and for release of detained colleagues.

The three-day demonstrations were held in almost all of the Islamic Republic’s cities, with claims of thousands in Shiraz and hundreds in the capital Tehran and in Yasouj in southwest Iran.

Videos on social media showed clashes as security forces tried to break up the gatherings. At least one trade union leader, Rasoul Bodaghi, was arrested and reportedly beaten.

The teachers have long called for fair wages, fulfilment of promised health insurance and retirement benefits, more resources and repair of schools, the curbing of privatization and fees for education, and an end to discrimination.

In one of his first decisions after his managed election in June, President Ebrahim Raisi blocked a pay increase for teachers.

The Government budget, submitted to Parliament on Sunday, includes a 10% pay rise for public sector workers. However, this is amid rampant inflation and far larger budget increases for the Revolutionary Guards (240%) and State media outlet IRIA (56%).

The Iranian Teachers Trade Unions Coordination Council responded, “Neither the government nor Parliament have shown any attention to our demands. Instead, they have announced a shrunken budget for the year 1401 (March 2022-March 2023)….Allocations to military and unaccountable institutions have increased many-fold while the livelihood of most people, namely teachers, have been ignored.”

Dozens of activists for teachers’ rights advocates are currently imprisoned. Between 2014 and 2019, at least four teachers were given the death sentence and three were executed.

The rally outside Parliament on Sunday: