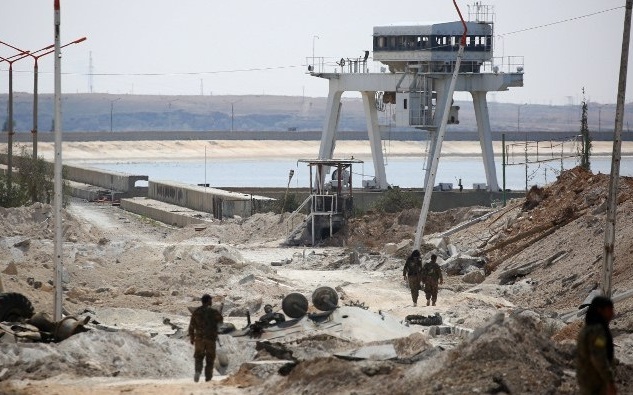 The US military bombed Syria’s largest dam on March 26, 2017, threatening hundreds of thousands of civilians with flooding.

The 18-story Tabqa Dam is on the Euphrates River in the north of the country, in an area held by the Islamic State in 2017.

The dam was on the US military’s “no-strike list” of protected civilian sites. The commander of the US offensive against ISIS at the time, Lt. Gen. Stephen Townsend, said allegations of American responsibility were “crazy reporting”: “The Tabqa Dam is not a coalition target….When strikes occur on military targets, at or near the dam, we use non-cratering munitions to avoid unnecessary damage to the facility.”

See also Is Tabqa Dam in Danger of Collapse After US Airstrikes?

But reporters for the New York Times establish that a top-secret US Special Operations unit, Task Force 9, attacked the dam with some of the largest American conventional bombs.

At least one BLU-109 bunker-buster, designed to destroy thick concrete structures, was dropped. However, it failed to explode, possibly saving the entire dam from collapse.

Former officials said the task force bypassed the chain of command for authorization of the strike, using an emergency procedure for self-defense.

Three workers who went to the dam were slain in another airstrike.

Background to a Bombing

Anti-Assad fighters took control of the dam, 30 miles north of the city of Raqqa, in 2013. The Islamic State defeated them the next year as the faction expanded through much of north and east Syria.

ISIS maintained a small garrison in the dam’s towers. As it advanced in 2017, the US-led coalition saw the capture of the dam as essential, to prevent the Islamic State intentionally flooding their forces downstream.

In a report ordered by Task Force 9, specialized engineers in the Defense Intelligence Agency concluded that it was not safe to strike the dam with bombs or missiles. They warned that a critical malfunction could ensue, with the resulting flood killing tens of thousands of people. That assessment bolstered a UN report of January 2017 which warned that settlements for more than 100 miles downstream would be flooded.

A Series of Bombings

Since mid-November, the New York Times has documented a series of deadly strikes in Syria and Iraq by Task Force 9, obtaining the US military’s confidential assessments of more than 1,300 reports of civilian casualties.

The attacks included a bombing that killed about 80 civilians, including scores of women and children, in northeast Syria in March 2019, as the US-led coalition and the Kurdish-led Syrian Democratic Forces were trying to remove the Islamic State from its last village in the country.

Only a handful of the killings have been made public, with no apparent finding of wrongdoing or disciplinary action. Less than 12 payments have been made to injured and disabled victims or to families of the slain.

“The Destruction Would Have Been Unimaginable”

In response to the Times report on the Tabqa Dam, Central Command denied targeting the dam or any bypaass of procedures. Urban said the bombs hit only the towers attached to the dam, not the dam itself, in limited strikes which had been preapproved by commanders.

“Analysis had confirmed that strikes on the towers attached to the dam were not considered likely to cause structural damage to the Tabqa Dam itself,” Urban said. He claimed that, as the dam did not collapse, “That analysis has proved accurate.”

The mission, and the strikes that enabled it, helped return control of the intact Tabqa Dam to the people of Northeast Syria and prevented ISIS from weaponizing it,” Captain Urban said. “Had they been allowed to do so, our assessments at the time predicted that they would have inflicted further suffering on the people of Syria.

But two former officials, both involved in airstrikes, and local witnesses said the dam stopped functioning as critical equipment was destroyed. The reservoir rose 50 feet and almost spilled over the dam. Authorities in Turkey cut water flow to get time for repairs, as all parties in the northern Syria conflict — ISIS, the Syrian Defense Forces, the US, and the Assad regime — declared an emergency ceasefire.

Engineers said only their quick work saved the dam and people in the valley. A former director asserted, “The destruction would have been unimaginable. The number of casualties would have exceeded the number of Syrians who have died throughout the war.”

Urban claimed that on the day of the bombing, the Syrian Democratic Forces took “heavy casualties” as they tried to take control of the dam.

But dam workers said they saw no heavy fighting or casualties that day. And a US military report makes no mention of enemy fire or coalition losses.

Instead, airstrikes were requested for “terrain denial”, indicating no enemy danger from an ISIS assault.