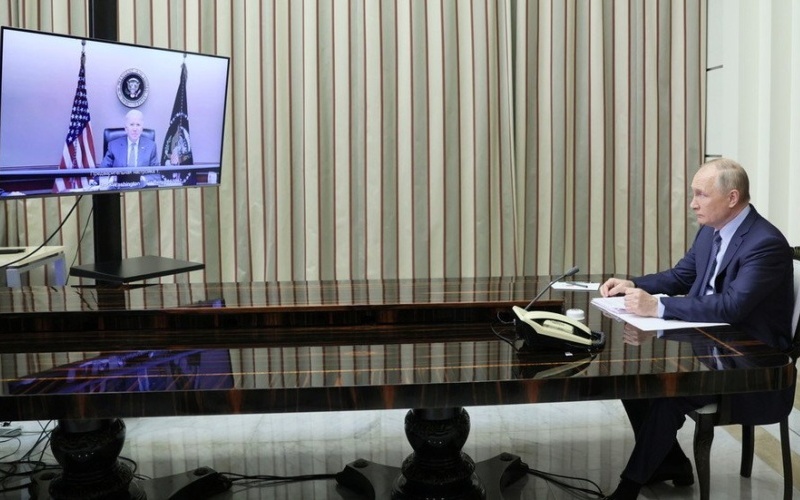 US President Joe Biden has used a two-hour virtual summit to warn Russian counterpart Vladimir Putin of significant economic punishment over any invasion of Ukraine by Moscow’s forces.

Biden also told Putin that NATO would reposition its troops in Europe to meet the challenge, and that Russia’s hopes of operating the Nord Stream 2 gas pipeline to Europe through Germany would be ended.

American officials said Putin gave no indication of his intent on Tuesday, after massing 94,000 Russian troops on Ukraine’s border. The buildup supports almost eight years of Moscow’s pressure, including the annexation of Crimea and efforts to split eastern Ukraine from Kyiv, after the fall of pro-Russian President Viktor Yanukovych in February 2014.

Each side said that its leader was resolute in the discussion. US National Security Advisor Jake Sullivan said Biden was clear, direct, and candid: “There was no finger-wagging, but the president was crystal clear.” The Kremlin emphasized Putin’s reiteration, in an “honest and businesslike” conversation, that NATO’s military involvement in Ukraine is a approaching a “red line” that threatens Moscow.

Neither side gave details of the substance of the conversation. However, US officials have said economic steps under consideration, working with European allies, include blocking of Russian companies from access to global capital markets to financial penalties aimed at Putin’s inner circle and Russian oligarchs. There is also discussion of cutting Russia off from the global transaction system SWIFT, although some European officials fear it would provoke Moscow’s harsh response.

Sullivan spoke on Tuesday of “an alternative pathway by which we can make progress on diplomacy”, pointing to a return of discussion of the Minsk Agreement. The agreement, set out in 2015, is a process for resolution of the status of eastern Ukraine; however, it has failed to settle the conflict in the region.

But the National Security Advisor’s emphasis was on deterring Russia from any further attempt to destabilize Ukraine: “I will look you in the eye and tell you, as President Biden looked President Putin in the eye and told him today, that things we did not do in 2014, we are prepared to do now.”