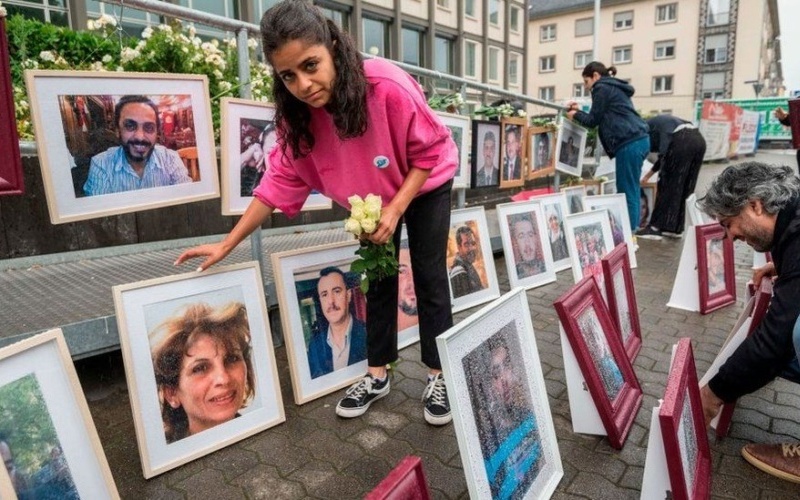 A court in Koblenz, Germany has been given a life sentence to a former Assad offficer, Col. Anwar Raslan, over the torture of thousands of Syrians and murder of 50 in regime prisons.

Fifty victims — 24 of them co-plaintiffs — testified vividly about Raslan’s offenses, bullding the case for his conviction.

ORIGINAL ENTRY, FEB 24, 2021: A former Assad regime intelligence official has been convicted in a German court of complicity in crimes against humanity.

Eyad al-Gharib, 44, was sentenced to 4 1/2 years in prison over his role in the arrest of at least protesters and delivery of them to the al-Khatib detention center in Damascus in autumn 2011.

The former colonel is the first ex-regime official to be tried and convicted for involvement in the torture and execution of detainees since the Syrian uprising began in March 2011. Tens of thousands have been killed, died from inhumane conditions, or disappeared at the hands of the regime.

The court in Koblenz is also hearing the case of a second defendant. Anwar Raslan, 58, is accused of overseeing the murder of 58 people and the torture of 4,000 others. He defected in 2012 and fled Syria in Feburary 2013, arriving in Germany in April 2018.

During Gharib’s trial, more than a dozen Syrian men and women testified about abuses at the al-Khatib detention centre, “Branch 251” of the regime’s security system.

Prosecutors, seeking a 5 1/2-year sentence, have spoken of rape and sexual abuse, “electric shocks”, beatings with “fists, wires, and whips”, and “sleep deprivation”.

Other cases are being pursued in Germany, France, and Sweden.