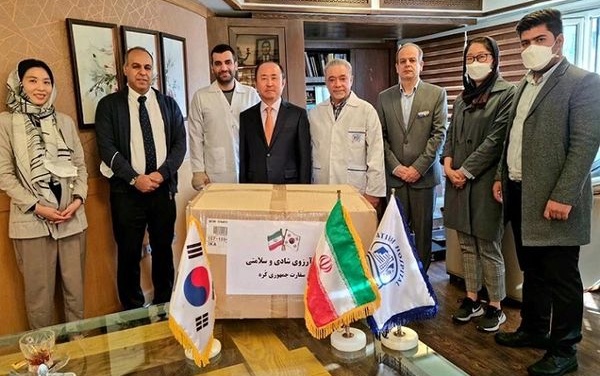 South Korea will pay compensation to Iran’s Dayyani Group over a 2015 dispute, more than three months after the Supreme Leader told Iranians not to buy South Korean appliances.

Dayyani, the family running the Iranian consumer electronics group Entekhab, sued the South Korean Government over failure to return a $50 million deposit in a failed bid to purchase a majority stake in bankrupt Daewoo Electronics.

In 2018, the World Bank’s International Centre for Settlement of Investment Disputes ordered Seoul to pay 73 billion won ($61.4 million) in compensation to the Dayyani family.

The South Korean Foreign Ministry said that the compensation was arranged after the US issued a “specific license” waiving American sanctions on Iran.

Seoul was hoping to highlight a humanitarian gesture, with Ambassador Yun Kang-hyeo meeting with the staff of Atieh Hospital.

But Iran’s leadership snapped at the donation, amid the ongoing freeze of $7 billion in Iranian assets in South Korean financial institutions. Foreign Ministry spokesman Saeed Khatibzadeh said the provision of masks was “a joke”: “No nation will tolerate another nation [stealing] from it.”

Iranians on social media echoed the criticism of an “insult,” and the “belittling” of the Islamic Republic as it faces US-led sanctions.

Seeking leverage over the frozen assets, the Revolutionary Guards seized a South Korean oil tanker in January for three months, and the Supreme Leader has demanded a halt to import of South Korean products.

Javan, a newspaper affiliated with the Revolutionary Guards, said South Korea and its “stinking ambassador” should be punished for “the humiliation”: “His expulsion from the country [alone] cannot be a response to this insolence.”

The outlet criticized Atieh Hospital’s staff and chided the Foreign Ministry: “This was not a joke for anyone to laugh at.”

The South Korean embassy responded with a list of humanitarian assistance in recent months, including 1 million doses of the AstraZeneca vaccine in October, 1 million face masks in July, and $27 million to help Afghan refugees. The embassy said more aid will be announced “soon”.

Iran has officially announced more than 127,000 Coronavirus deaths and almost 6 million confirmed cases. The country is coming out of a summer surge which saw record numbers of daily fatalities and infections.

Ayatollah Khamenei commanded that “imports should be banned” because they were “breaking the backs of domestic home appliance companies”. They prompted an order by President Ebrahim Raisi to the Industry, Mines, and Trade Minister.

South Korea has angered the Iranian regime by refusing to unfreeze about $7 billion in Iranian assets amid comprehensive US sanctions. In January, the Revolutionary Guards seized a South Korean tanker in an apparent attempt at pressure on Pyongyang.

The tanker was released in April as the Vienna nuclear talks considered US re-entry into the 2015 nuclear deal and the easing of sanctions. In July the South Korean Finance Ministry said that Iran would repatriate $1 billion, although the transfer has not been confirmed yet.

However, the Supreme Leader’s motive appears to be connected not as much with the nuclear issue as with the concerns of Iran’s appliance manufacturers. He has said, “The import of goods that are already sufficiently produced domestically should be prohibited in law. And what we produce in this country should not be imported.”

There has been an informal ban on South Korean products since 2018, with Samsung and LG phones, branded goods, and accessories confiscated from shops. However, the possibility of the $1 billion repatriation raised the prospect that the imports would resume.

So on September 6, a letter from Khamenei’s office chief Mohammad Mohammadi Golpaygani referred to “two South Korean companies” and cited the desire of Iranian manufacturers to block the resumption of imports. Two days later, Raisi conveyed Khamenei’s instructions to the Industries and Economy Ministers.

The value of Iran’s home appliances market is estimated at $4.5 billion to $6 billion dollars.