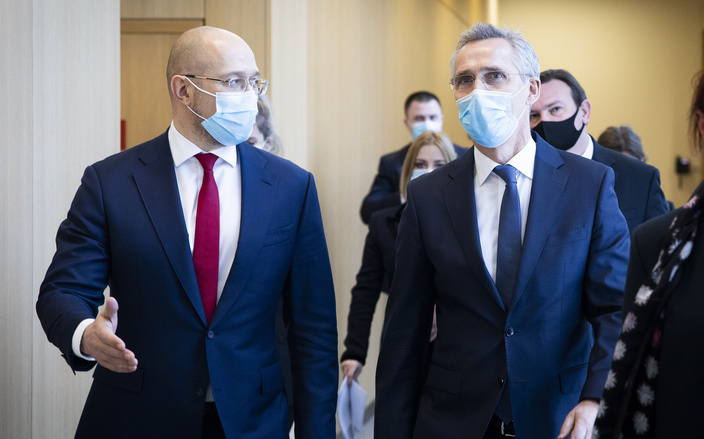 Russia’s National Defense Command Center said that it is monitoring the US missile destroyer USS Arleigh Burke in the Black Sea.

The US 6th Fleet said the destroyed entered the Black Sea on Thursday on a routine patrol in cooperation with NATO allies and partners.

ORIGINAL ENTRY: As Russia deploys about 100,000 troops on the border with eastern Ukraine and in Crimea and Belarus, Ukrainian Prime Minister Denys Shmyhal has called on NATO to send warships to the Black Sea and to increase reconnaissance flights along Russian borders.

Polish President Andrzej Duda made a similar request in a meeting with NATO Secretary-General Jens Stoltenberg in Brussels on Thursday: “We are receiving information all the time about the Russian build-up, perhaps an aggressive build-up in the direct neighborhood of the Ukrainian border.”

Duda also asked for an increased deployment of allied troops in Poland and the Baltic countries of Estonia, Latvia, and Lithuania.

NATO has had combat-ready battle groups in the four countries since Russia annexed Crimea from Ukraine in 2014 and gave military support to separatists in the east of the country.

In the interview with POLITICO, Shmyhal said Ukraine agreed with the US intelligence assessments of a sizable increase in the number of Russian forces on the border — not only along the border with the Donetsk region that is largely occupied by Russian-backed separatists, but also in Crimea and in Belarus — with the total now numbering nearly 100,000 soldiers.

Russia staged large military exercises with Belarus this autumn. Ukraine officials say some of those troops have remained, while Moscow deployed new military intelligence units along the Belarus-Ukraine border.

However, any Russian initiative could jeopardize the operation of the newly-constructed Nord Stream 2 gas pipeline to Germany.

German Chancellor Angela Merkel said on Thursday that the European Union must be prepared to enact more sanctions against Russia if there is a further military escalation.

Speaking in Berlin alongside Polish Prime Minister Mateusz Morawiecki, Merkel said the EU must be united over the “weaponization” of migrants on the Belarus-Poland border as well as Russia’s troop deployment.

The Biden Administration has objected to the pipeline. However, it is quietly lobbying Congress not to include sanctions in a defense bill unless there are provisions for Administration waivers. Biden officials want to avoid punishing German participants in the project.

Moscow on a regular basis is demonstrating its military potential and definitely is aiming and wishing to disrupt our Euro-Atlantic aspirations and our move towards the Euro-Atlantic direction. And in order to ensure that the tense situation is upheld with the proper degree of nervousness, the Russian Federation is regularly regrouping its troops along the border line with Ukraine.

Alina Polyakova, the President of the Washington-based Center for European Policy Analysis, recently testified in Congress in support of an increased NATO commitment to Ukraine:

The BSR is vital to U.S. strategic interests of deterring Russian aggression against allies, ensuring European stability, and protecting freedom of navigation. Insufficient resources and attention have undermined the US and allies’ ability to effectively pursue these objectives at the same time as Russia has stepped up its aggression and China is increasing its foothold in the region.

The BSR is the locus of the Kremlin’s tests against Alliance credibility and resolve, which have escalated over the last two decades in the conventional and nonconventional domain: from the invasion of Georgia in 2008 to the 2014 illegal and illegitimate annexation of Crimea and invasion of eastern Ukraine, to cyberattacks and information-influence operations.