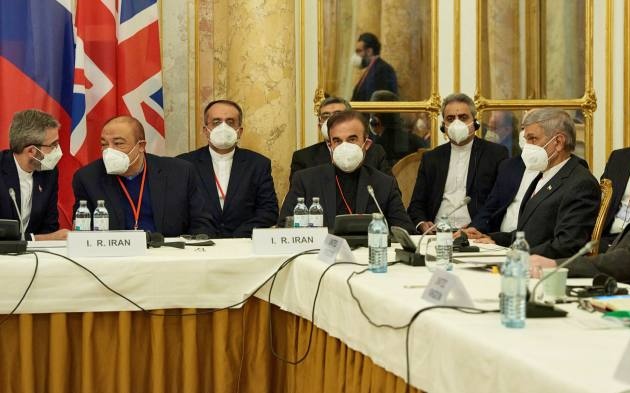 Iran delegation at the 7th set of talks on the 2015 Iran nuclear deal, Vienna, Austria, December 2021

The Iranian currency continues to slide after last week’s lack of progress in the Vienna nuclear talks.

Iranian President Ebrahim Raisi declared in a Tuesday speech, “Some people are trying day and night to raise the exchange rate and prove that the dollar exchange rate is connected to the negotiations.”

Raisi ordered the identification of the “disruptors” are. Hours later, the Intelligence Ministry announced the closure of 700 bank accounts, claiming “turnover of some of these accounts had amounted to 200 trillion rials (over $645 million) in the past nine months”.

“Informed sources” have said the talks over the 2015 nuclear deal could resume on Thursday.

The German Foreign Ministry, reiterating the line of the US and European powers, said on Monday that Iran’s proposals last week were “not a basis for a successful end to talks”.

A spokeswoman explained, “We reviewed the proposals…carefully and thoroughly and concluded that Iran violated almost all compromises found previously in months of hard negotiations.”

Iran’s lead nuclear negotiator has defended Tehran’s approach in the Vienna talks, stepping back from advances between April and June.

Deputy Foreign Minister Al Baqeri Kani insisted that two Iranian drafts, one on sanctions and one on aspects of the 2015 nuclear deal, are “logical and well-founded”.

But he indicated that, in contrast to the “linked” approach in the first six sets of the Vienna negotiations, the Raisi Government is calling for the return of the US to the agreement and unilateral lifting of American sanctions before any Iranian steps.

“Even the administration of Joe Biden believes that the withdrawal of the United States from the agreement [in May 2018] was an illegal move. So it is up to them to make the first move to reactivate the agreement,” Baqeri Kani said.

He lashed out at the UK, Germany, and France, all of whom criticized Iranian “backtracking” in last week’s seventh rounds:

As for the Europeans, they too have not respected their obligations to remedy the American move. That is to say, they did not oppose the logic of American sanctions, which inflicted heavy damage on the Iranian economy….

But the past non-constructive behavior of the other signatories of the agreement and the repeated violations of their obligations require us not to be naive.

President Ebrahim Raisi said, during a Sunday night interview on State TV, “It was proven to the whole world that Iran would stage a powerful and estimable participation in the talks….The issue of removal of the sanctions was pursued powerfully, and the issue of neutralizing the sanctions is also being followed through.”

The Iranian currency has responded to the suspension of nuclear talks by falling almost 3% against the US dollar.

The Iranian currency rebounded to 254,000:1 with November’s election of US President Joe Biden and reached 218,000:1 when he was inaugurated in January. However, it has fallen steadily through 2021 as no agreement was reached on a revised Iranian nuclear deal.

A “senior Iranian diplomat” has played down any difficulty over the suspension of the latest talks on the 2015 nuclear deal.

We see no impasse in the Vienna talks. We’ve provided the other parties with clear-cut draft proposals, and have encouraged them to come up with written responses or new ideas.

But he then he pushed Tehran’s blame of the European powers of the UK, France, and Germany:

They can’t justify their passivity and inaction by pointing a finger at Iran….[Our texts] are not maximalist, but rather E3 are minimalist in fulfilling their JCPOA [Joint Comprehensive Plan of Action] commitments.

They (Britain, France and Germany) have to finally honor their words and abide by the deal. We remain ready to engage in good faith and seriously, and we expect other parties [to do] the same.

US Secretary of State Antony Blinken offered a contrasting view: “What we’ve seen in the last couple of days is that Iran right now does not seem to be serious about doing what’s necessary to return to compliance, which is why we ended this round of talks in Vienna.”

He repeated, “If the path to a return to compliance with the agreement turns out to be a dead-end, we will pursue other options.”

The seventh set of talks have concluded with a meeting of the Joint Commission (Iran, UK, France, Germany, China, Russia, and the European Union)

Representatives of the UK, France, and Germany said they were “disappointed and concerned” about Iranian texts on sanctions and compliance that retracted compromises achieved during the first six rounds of talks between April and June.

Iran is backtracking on almost all of the difficult compromises reached in months of tough negotiations and is demanding substantial changes to the text.

With the combination of the new position and Iranian steps suspending compliance with the 2015 nuclear deal — including the enrichment of 20% and 60% uranium and installation of advanced centrifuges at the Fordoo as well as Natanz complexes — the European diplomats said it is difficult to know if a resolution can be reached in a realistic timeframe: “Our governments remain fully committed to a diplomatic path but the window for that is getting smaller.”

Earlier today, a European diplomat said the Iranian texts were “not serious and unacceptable“. And a “Western official” said the Iranian lead negotiatior, Deputy Foreign Minister Ali Baqeri Kani, “does not seem to understand the urgency of the situation”.

ORIGINAL ENTRY, DEC 3: The seventh set of talks on the 2015 Iran nuclear deal are ending in Vienna on Friday with little apparent progress.

The discussions will conclude on Friday after five days with a formal meeting of the Joint Commission of the powers still in the deal (Iran, UK, France, Germany, China, and Russia). Delegations, including the US representatives, will return to their capitals for further discussions.

An Iranian official indicated that the Raisi Government, after a five-month break in negotiations, had brought significantly tougher proposals without returning the talks to their starting point in April. He said that there are much larger gaps in the positions of all sides than on June 20, when the sixth set of talks adjourned. At that time, Iran’s lead negotiator Deputy Foreign Minister Abbas Araqchi said a resolution was “closer to the end of the road”.

The talks were adjourned at that time for the managed election of President Ebrahim Raisi and the inauguration of his Government in August.

Notably, the Iranian official added this week that the European powers — the UK, France, and Germany — were unhappy with the Iranian proposals on US re-entry into the deal, the lifting of American sanctions, and Iran’s return to compliance with the Joint Comprehensive Plan of Action.

Publicly, Iranian Foreign Minister Hossein Amir-Abdollahian used a Thursday phone call with his Japanese counterpart, Yoshimasa Hayashi, to declare, “We are not optimistic about the will and intention of the US and the three European countries.”

Nour News, linked with Iran’s Supreme National Security Council, bolstered the message with the declaration that the Europeans had not put any initiative on the negotiating table.

The toughened Iranian line was also demonstrated on Wednesday with the revelation that Tehran, breaking the provisions of the 2015 nuclear deal, has restarted the enrichment of 20% uranium with 94 advanced IR-6 centrifuges at the Fordoo underground plant.

In January, Iran resumed production of 20% uranium at its Natanz complex, and it began the enrichment of 60% fuel in April.

Under the 2015 deal, Iran halted production of 20% uranium, shipped all stocks abroad, and pledged not to pursued advanced centrifuges. However, Tehran began suspending compliance in July 2019, following the Trump Administration’s withdrawal from the deal in May 2018 and imposition of comprehensive sanctions in November.

IAEA boss @rafaelmgrossi @france24: "I confirmed that #Iran increased production capacity at its enrichment plant in #Fordow. It's very important they give unfettered access to my inspectors. If they limit access, then we do have a problem"
▶️https://t.co/tx8K66UeVx pic.twitter.com/Uz6a9q1xiQ

US Secretary of State Antony Blinken, meeting Russian Foreign Minister Sergey Lavrov in Sweden on Thursday, said of the Iran talks, “I have to tell you, recent moves, recent rhetoric don’t give us a lot of cause for optimism.” He continued:

But even though the hour is getting very late, it is not too late for Iran to reverse course and engage meaningfully in an effort to return to mutual compliance with the JCPOA.

What Iran can’t do is sustain the status quo of building their nuclear program while dragging their feet on talks. That will not happen. That’s also not our view alone. It’s very clearly the view of our European partners.

He added that he “had a good conversation as well with Foreign Minister Lavrov about this”, and believed “Russia shares our basic perspective”.