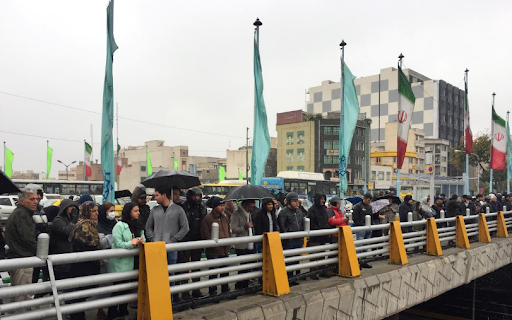 Demonstration in Khuzestan Province amid national protests in Iran, November 2019

A court in Khuzestan Province in southwest Iran has sentenced one brother to death and another to a life sentence over their participation in nationwide protests in November 2019.

Abbas and Mohsen Deris, both from Khuzestan’s Arab minority, were arrested during the four-day demonstrations sparked by the Government’s sudden rise in petrol prices.

Thousands of demonstrators were detained, some never to be seen again. At least 324 marchers were killed by security forces, according to Amnesty International.

The sentence was handed down four months ago, but has only now become public after a “source close to the Deris family” talked to the US-based Human Rights Activists News Agency.

The source said the prosecution’s claims were only conveyed verbally to the defense, with requests for documents denied. The defendants were cut off from attorneys, family, and friends, and they were allegedly tortured and forced into making “confessions”.

After learning about Abbas Deris’ death sentence, his wife reportedly suffered a stroke and died.

The Deris brothers were arrested for alleged involvement in the death of a security officer on November 18, 2019. They were detained in Mahshahr, a port city in Khuzestan Province, where security forced reportedly killed more than 100 people as they tried to escape through reed beds.

The case is drawing comparison with that of champion wrestler Navid Afkari, who was executed in September 2020 over his participation in protests in August 2018. His brother Habib has been sentenced to 54 years in prison and his brother Vahid to 25 years.