Iran’s President Says Some Assets Unfrozen — Is He Bluffing? 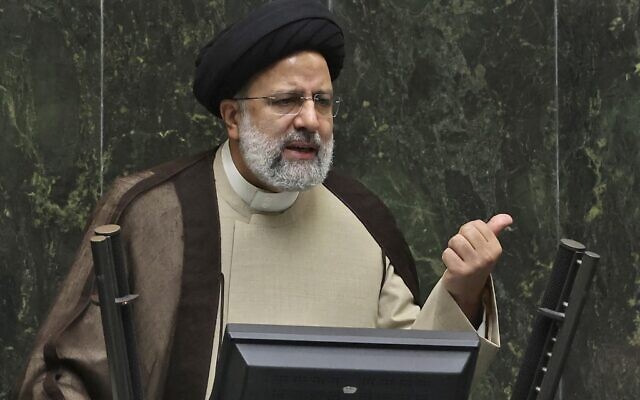 Iran’s President Ebrahim Raisi says some of the country’s assets have been unfrozen despite US sanctions.

Is he pointing to a breakthrough for Tehran over its nuclear program? Or is he bluffing to justify a return to negotiations in Vienna, after stalling for five months?

The reports of unfrozen assets were spurred last Friday by the managing director of the Islamic Republic News Agency, Ali Naderi, who said $3.5 billion had been released in Raisi’s first 100 days in office. An editorial in the Revolutionary Guards’ Javan newspaper raised the figure to $4 billion.

There was no corroboration of the claims. However, on Tuesday Raisi told Parliament, “In the beginning, the government had problems with selling oil, but now the situation has improved and I can only say that the government has access to its resources in other countries.”

Raisi gave no figure for the assets which have supposedly been freed.

Journalist Barak Ravid offers a clue to the current state of negotiations. It reports that US National Security Adviser Jake Sullivan told his Israeli counterpart Eyal Hulata of a possible interim agreement over the assets and US sanctions.

Sullivan reportedly said Iran would suspend its enrichment of uranium to 60%, a further Iranian step breaking the nuclear deal’s limit of 3.67%. In return, the US and allies would release some assets or issue sanctions waivers on humanitarian goods.

Axios said the proposal initially came from a “European ally” of Washington.

Huleta opposed the idea, expressing concern that Iran could maintain 20% uranium enrichment and the advanced centrifuges it has installed since suspending compliance with the deal in June 2019. He reiterated the opposition to the Biden Administration’s envoy for Iran, Robert Malley.

Iran has focused initially on up to $8 billion of assets in South Korean financial institutions. During the Vienna negotiations from April to June, reports circulated that the US was willing for $1 billion to be unfrozen, in return for Iran pulling back from steps which have broken provisions of the 2015 nuclear deal.

That arrangement was never confirmed, despite a visit by South Korean Prime Minister Chung Sye-kyun to Tehran in April. Iran, which had detained a South Korean oil tanker for three months, returned to hostile rhetoric with the Supreme Leader calling for an import ban on South Korea’s appliances. At the start of November, Iranian officials sneered at Seoul’s donation of Coronavirus masks to a private hospital in Tehran.

Iran has agreed to resume the Vienna negotiations on November 29; however, it has continued its defiance of the International Atomic Energy Agency by hindering and even refusing inspections. IAEA head Rafael Grossi will be in Tehran next week, with Iran finally issuing an invitation after Grossi said it was “astonishing” that the Iranians had not been in contact.

Israel’s Hulata told US official Sullivan that Washington and its European partners must censure Iran at next week’s meeting of the IAEA Board of Governors.