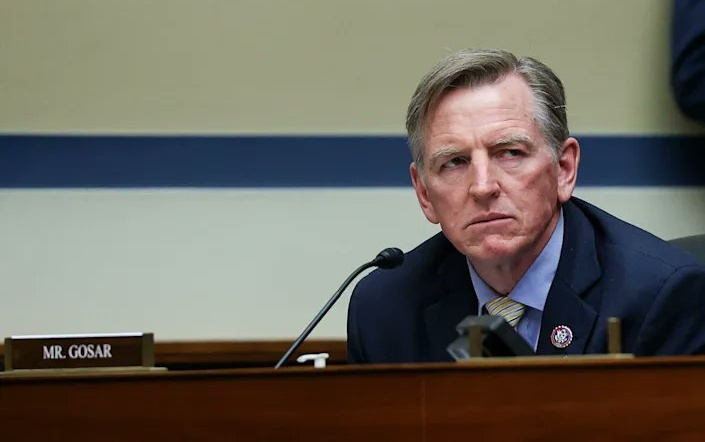 However, almost all Republicans opposed the censure against the legislator, who is allied with white supremacists. In the 223-207 vote, only Reps.Liz Cheney of Wyoming and Adam Kinzinger of Illinois joined Democrats. Another Republican, Rep. David Joyce of Ohio, voted “present”.

The censure is the first since 2010 and the 24th in US history. It removes Gosar, whose six brothers and sister have denounced him, from House committees.

Gosar’s video, which he promoted on social media, was posted amid a House select committee’s inquiry into the January 6 attack on the US Capitol. Donald Trump is trying to block the hearings, refusing to turn over documents and ordering former staff not to testify or provide material.

Speaker Nancy Pelosi of California explained, “When a member uses his or her national platform to encourage violence, tragically, people listen….Depictions of violence can foment actual violence, as witnessed by this chamber on January 6, 2021.”

But Minority Leader Kevin McCarthy of California, who has pledged loyalty to Trump, threatened House Democrats with punishment if Republicans take control of the House: “There’s an old definition of abuse of power: rules for thee but not for me.”

In the last House censure 11 years ago, Pelosi read out the motion against Democratic Rep. Charles Rangel of New York over tax evasion and self-dealing. Many Democrats backed the punishment.

Gosar refused to accept any wrongdoing. Instead, he asserted, “I reject the false narrative categorically.”

Republican colleagues flanked Gosar as he spoke. Rep. Rodney Davis of Illinois insisted that Pelosi had “torn the fabric of this House apart”.

McCarthy specifically warned Democratic Rep. Maxine Waters of California, who addressed Black Lives Matter marchers in Minneapolis last year after the killing of George Floyd. She told them to “get more confrontational”.