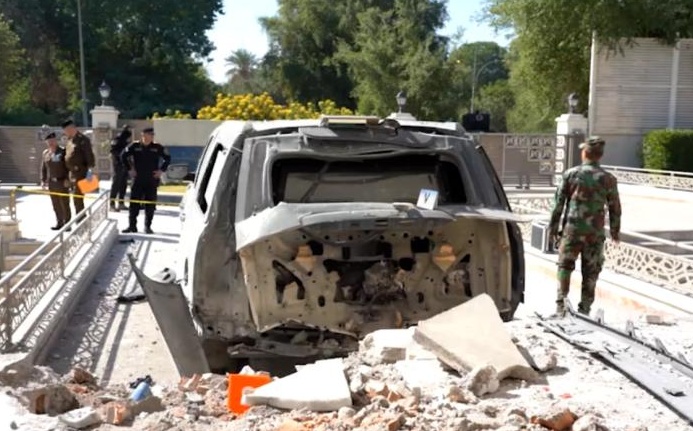 The sources said that the Iranian regime is unlikely to have sanctioned the attack — an asssessment borne out by the emergency visit of Quds force commander Esmail Qa’ani to Baghdad, including talks with Prime Minister al-Kadhimi and militia leaders, hours after the three drones were deployed.

No group has claimed responsibility for the attack; however, signs are pointing to Iranian-backed militia.

Security forces shot down two drones, but a third hit al-Kadhimi’s home in the Green Zone with its government buildings and foreign embassies.

The Prime Minister was shown on video in his office after the attack, chairing a meeting with security commanders. His office said in a statement, “The cowardly terrorist attack that targeted the home of the prime minister last night with the aim of assassinating him, is a serious targeting of the Iraqi state by criminal armed groups.”

Kadhimi said, “We will pursue those who committed yesterday’s crime; we know them well and we will expose them.”

The drone munitions in Sunday’s attack are almost identical to those used in an attack by the Iran-backed militias on the Green Zone in July.

An Urgent Mission from Tehran

The commander of Iran’s Quds Force, responsible for operations outside the Islamic Republic, urgently traveled to Baghdad on Sunday night for a meeting with Kadhimi to give “a clear and strong condemnation of the attack”.

After he saw the Iraqi Prime Minister, Qa’ani met militia leaders, calling for self-restraint and respect for the rue of law. One attendee said:

Qa’ani made it clear that Iran is at the same distance from all factions. Iran will not allow anyone to misinterpret its support to [mean a green light to] undermine the Iraqi government.

On Friday, the militias led protests over the outcome of Parliamentary elections on October 10, claiming irregularities in the vote and count.

The militias lost more than 2/3rd of their Parliamentary seat while other Shia factions, notably that of the cleric Moqtada al-Sadr, led in the ballot.

The blood of martyrs will hold you accountable.

The protesters only had one demand against fraud in elections. Responding like this [with live fire] means you are the first responsible for this fraud.

Militia members have been indicted for over some of the killings of almost 600 protesters during nationwide demonstrations in 2019. The militias are suspected of the assassination of Kadhimi’s advisor Hisham al-Hashemi.

The Secretary of Iran’s National Security Council, Ali Shamkhani, insisted that the drone assault “is a new sedition that must be traced back to foreign think tanks”.

Dr. Seyed Mohammad Marandi, an unofficial spokesman for Iran’s leadership, tried to argue that the US military staged the attack.

This happens right after unarmed protesters are killed with live ammunition near the Prime Minister's office.

Interestingly, the drone didn't kill anyone either.

A cynical person would say people close the US occupation forces would benifit a lot from this. https://t.co/luN0NzASTk