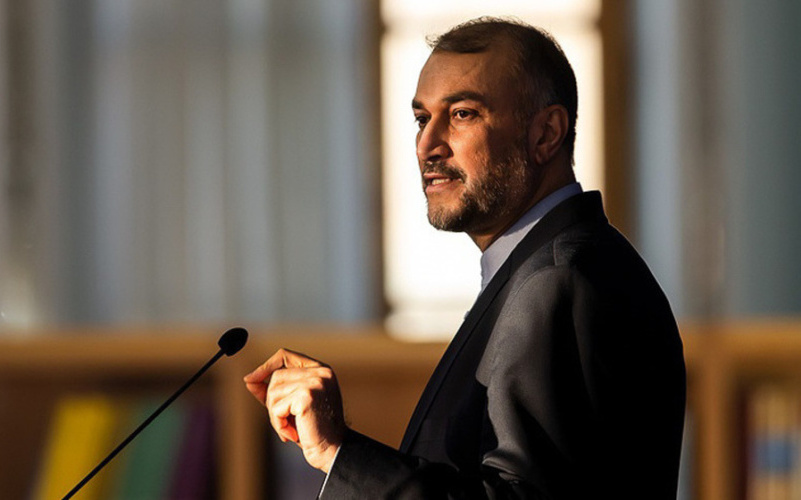 In phone calls with counterparts on Monday, including UK Foreign Minister Dominic Raab, Amir-Abdollahian indicated that Iran will accept the linkage of US sanctions removal and Iran’s return to compliance with the 2015 agreement with the 5+1 Powers.

While finally agreeing to the renewed talks on November 29, Iranian officials had maintained a precondition of the lifting of sanctions. The stance raised questions as to whether Iran would insist on setting aside the progress in talks between April and June, before the managed election of President Ebrahim Raisi and establishment of his Government.

But Amir-Abdollahian’s Twitter message was similar to the line taken by the remaining powers in the deal (UK, France, Germany, China, and Russia) about the relationship between US re-entry, sanctions, and Iranian compliance including a step back from enrichment of 20% and even 60% uranium.

Deputy Foreign Minister Ali Baqeri, Iran’s chief negotiator, will visit European counterparts in their capitals this week. He tweeted on Monday, “We shall spare no effort in advancing our national interests incl removal of illegal sanctions.”

An extract from my analysis for Australia’s The World:

Iran has agreed to resume talks with world powers on reviving a #nuclear deal. After five months away from the table, @ScottLucas_EA tells @bevvo14 it’s unclear where the negotiations are at #TheWorld pic.twitter.com/6E7piD7kSw

President Ebrahim Raisi has issued a vague statement endorsing the resumption of negotiations but trying to set the removal of US sanctions as the priority.

Raisi did not say if Tehran is setting aside progress in the talks between April and June.

#Iran president: We want negotiations that are outcome-oriented… We do not leave the negotiating table, but we also stand against excessive demands… We seek both lifting as well as neutralizing sanctions. pic.twitter.com/Fjc9a7tEJU

The Vienna talks over the 2015 Iran nuclear deal might resume on November 29.

In another shift of its public position, Tehran announced its return after a five-month suspension through the Twitter account of Deputy Foreign Minister Ali Baqeri.

In a phone call with @enriquemora_ , we agreed to start the negotiations aiming at removal of unlawful & inhumane sanctions on 29 November in Vienna.

The European Union’s Enrique Mora, the broker of the talks, and the US subsequently confirmed the date.

We believe it remains possible to quickly reach and implement an understanding on a mutual return to compliance with the JCPOA [Joint Comprehensive Plan of Action] by closing the relatively small number of issues that remained outstanding at the end of June.

“We believe that if the Iranians are serious, we can manage to do that in relatively short order….[But] this window of opportunity will not be open forever, especially if Iran continues to take provocative nuclear steps.”

Before Baqeri’s tweet, top Iranian official Ali Shamkhani had taken a harder line, “The US President, lacking authority, is not ready to give guarantees. If the current status quo continues, the result of negotiations is clear.”

In fact, President Joe Biden committed last week, in talks with European leaders at the G20 summit, not to repeat Donald Trump’s withdrawal from the deal if the Vienna talks confirm US re-entry.

Iranian Foreign Minister Hossein Amir Abdollahian had indicated that Tehran wants to set aside the progress in the talks between April and June — when Deputy Foreign Minister Abbas Araqchi said negotiations were “closer to the end of the road” — but Russia has rejected that position.

Iran’s Foreign Ministry has reinforced the retreat from a commitment to rejoin nuclear talks by the end of November.

Spokesman Saeed Khatibzadeh said on Monday, “It is natural for Tehran not to think of dialogue with Washington in any format until realities on the ground change.”

Khatibzadeh returned to the precondition that the Biden Administration must lift some US sanctions before Iran rejoins negotiations in Vienna: “We have already had enough of empty words. We have been waiting for an action that has been delayed for months.”

Iran’s Foreign Minister has pulled back Tehran’s pledge to rejoin the Vienna nuclear talks by the end of November.

Hossein Amir-Abdollahian stepped back in a Sunday interview with Iran daily newspaper, proclaiming that the US is not serious about fulfilling its verbal claims of readiness to rejoin the 2015 nuclear deal between Iran and the 5+1 Powers (US, UK, France, Germany, China, and Russia).

Amir-Abdollahian indicated that the Raisi Government wants to set aside any progress in the six sets of discussions in Vienna between April and June, over the US return, lifting of American sanctions, and Iran’s return to compliance with the deal’s provisions.

When I was in New York [in late September for the UN General Assembly], I received demands to return to the Vienna talks and restart negotiations from the point that the parties had reached before Iran stopped taking part in those talks.

I told the three European countries [UK, France, and Germany], and Mr. Josep Borrell [the European Union’s foreign policy chief) and [UN Secretary General António] Guterres that…perhaps a simpler way is to agree [to return to talks] at the point where Trump left off.

Amir-Abdollahian declared that President Joe Biden could unilaterally announce the US return to the deal, following the Trump Administration’s withdrawal in May 2018 and imposition of comprehensive sanctions that November.

On Sunday, at the G20 summit in Rome, the US and European partners called on Iran to return to the negotiating table after suspending the talks in June, before the managed election of President Ebrahim Raisi.

The US President met one Iranian condition with the pledge that his Administration will not repeat a Trumpian withdrawal, with a “clearly demonstrated commitment to return the US to full compliance with the JCPOA [Joint Comprehensive Plan of Action] and to stay in full compliance, so long as Iran does the same.”

US Secretary of State Antony Blinken said the US is “absolutely in lock step” with the Europeans, but added it is unclear if Iran is willing to rejoin the talks in a “meaningful way”.

It really depends on whether Iran is serious about doing that. All of our countries, working by the way with Russia and China, believe strongly that that would be the best path forward.

Russia has cautioned the Raisi Government not to set aside this spring’s progress in talks. Its ambassador to international organizations in Vienna, Mikhail Ulyanov, welcomed the Biden pledge against a second US withdrawal.

ORIGINAL ENTRY, OCT 28: After months of stalling, Iran’s Raisi Government says it will rejoin the Vienna nuclear talks by the end of November.

had a very serious & constructive dialogue with @enriquemora_ on the essential elements for successful negotiations.
We agree to start negotiations before the end of November. Exact date would be announced in the course of the next week. https://t.co/0A7BOPZh8f

Baqeri said he had engaged in “very serious and constructive dialogue” with Mora “on the essential elements for successful negotiations”.

In Washington, Press Secretary Jen Psaki said Biden Administration officials were aware of Baqeri’s comments but were waiting for confirmation from European officials.

The sixth and last round of Vienna talks were held in June over US re-entry to the 2015 nuclear deal between Iran and the 5+1 Powers (US, UK, France, Germany, China, and Russia); lifting of American sanctions; and an Iranian return to compliance with the provisions.

A State Department spokesperson added, “This window will not remain open forever as Iran continues to take provocative nuclear steps, so we hope that they come to Vienna to negotiate quickly and in good faith.”

At the time, Iranian Deputy Foreign Minister Abbas Araqchi said the discussions were “closer to the end of the road”. But Tehran then suspended its participation, initially for the managed election of President Ebrahim Raisi and then for his inauguration in early August. Since then, Iranian officials have effectively set a precondition of the removal of some US sanctions for a return to the talks.

America’s return to the deal does not matter to us. What is important is that the outcome of talks be in Iran’s favour….[President Joe] Biden has to put his goodwill into practice by for instance releasing $10 billion of Iran’s blocked assets.