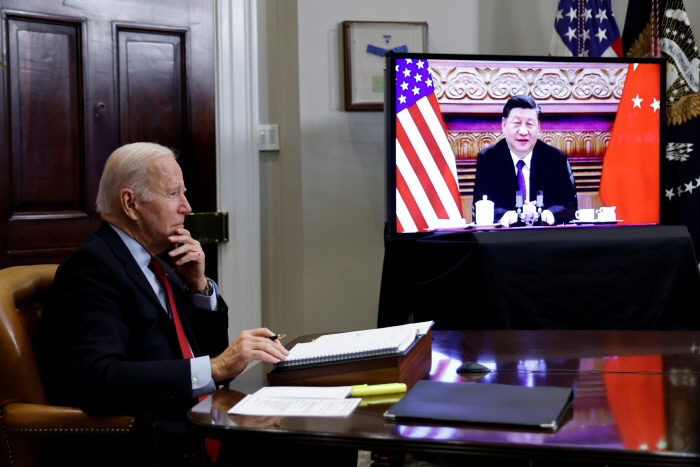 But Chinese State TV emphasized Xi’s warning that US support for Taiwan’s independence is “like playing with fire” and “those who play with fire will get burned”.

Xi added that he is prepared to take “decisive measures” if there are moves against Beijing’s one-China policy.

Biden responded with a caution about any “unilateral changes in the status quo”.

In a more positive summary, Chinese state media said the discussion, which lasted more than 3 1/2 hours, was “frank, constructive, substantive and fruitful”.

A senior US official was also upbeat:

The two leaders really did have a substantial back and forth and ability to sort of interact with one another in a way that they’ve not quite had in their phone calls, and so it really did facilitate a different kind of conversation. I would say that the the conversation was respectful and straightforward and it was open.

See also EA on Radio FM4: Missing the Point Over Biden, Taiwan, and China
EA on BBC: A China-US Showdown Over Taiwan? Not Quite.

A White House readoutsaid Biden raised China’s human rights abuses, Taiwan, and Beijing’s support of its state-based industries. However, he began with a conciliatory remark that he and Xi have “spent an awful lot of time talking to each other” since Biden was Vice President in the Obama Administration and Xi rose to the head of China’s Communist Party.

“We have a responsibility to the world as well as to our people,” he declared.

The White House summary said Xi called Biden “my old friend” and agreed that the two countries should work together.

China’s State TV summarized that Xi implicitly criticized the Biden Administration with a call for mutual respect. However, he “expressed his readiness to work with President Biden to build consensus and take active steps to move China-U.S. relations forward in a positive direction”.

Xi said that the world is big enough for the development of both China and the US, and that leaders should not play zero-sum games: “Humanity lives in a global village and we face multiple challenges together. China and the US need to increase communication and cooperation.”

“Work Together Where Our Interests Intersect”

Biden, who requested the call, spoke from the East Room of the White House on Monday night, Washington time. Xi was in Beijing’s Great Hall of the People on Tuesday morning.

While US-Chinese tensions have risen over issues such as the South China Sea, Taiwan, and cybersecurity, the two countries agreed on Wednesday to a joint working group on climate change. However, the senior administration official said Biden would state that the agreement was not a Chinese “favor” to the US, but a decision by China to act in its own best interests.

After the virtual conversation, the official restated the US position:

We weren’t expecting a breakthrough. There were none to report.

This was really about developing ways to manage competition responsibly, ensuring that as we go forward, the United States and China have a steady state of affairs where we take a series of competitive actions, but we’re able to keep open lines of communication. We work with our allies and partners and we confront China where we need to, and at the same time that we are able to work together where our interests intersect.

He noted that Biden’s invocation of human rights had little effect, with Xi warning against use of the issue to interfere in the internal affairs of other countries”.

“They have a real difference of worldviews,” the US official said.