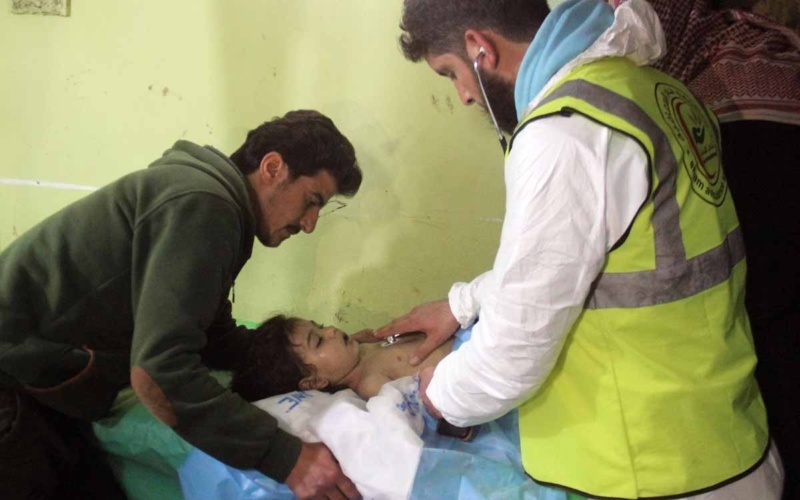 A medic treats a victim of the nerve agent attack on Khan Sheikhoun in Idlib Province, April 4, 2017

The European Union has extended sanctions on Syria’s Assad regime over its killing of civilians in chemical attacks.

The European Council announced an extension until 22 October 2022, specifying that the sanctions have been imposed on “two Syrian research centres and a Russian chemistry research institute”.

The sanctions were first imposed in 2018, including on officials and regime agencies involved in the development and use of chemical weapons. Last year, the EU added seven new regime ministers to the list of 280 people and 70 Syrian institutions and companies.

Last week the Organization for the Prohibition of Chemical Weapons reiterated that eight years after committing to destroy all chemical weapons and facilities — following its use of sarin gas near Damascus in August 2013, killing more than 1,400 civilians — the Assad regime has still not declared all of its chemical agents.

OPCW head Fernando Arias reported to the UN Security Council that the agency is still being blocked by the regime from inspecting the Barzah and Jamrayah facilities of the Scientific Studies and Research Center, the Assad regime’s organization for chemical weapons development.

The regime’s Foreign Ministry protested the EU announcement on Tuesday, calling it an extension of “illegitimate unilateral coercive measures which target the Center for Scientific Studies and Research and some of its employees”.

Much of the Ministry statement continued the Russian-regime attempt to portray the OPCW as a political tool of “countries hostile to Syria”.