UPDATE: Biden Scales Back $3.5 Trillion Budget, with Cuts of Education and Paid Leave 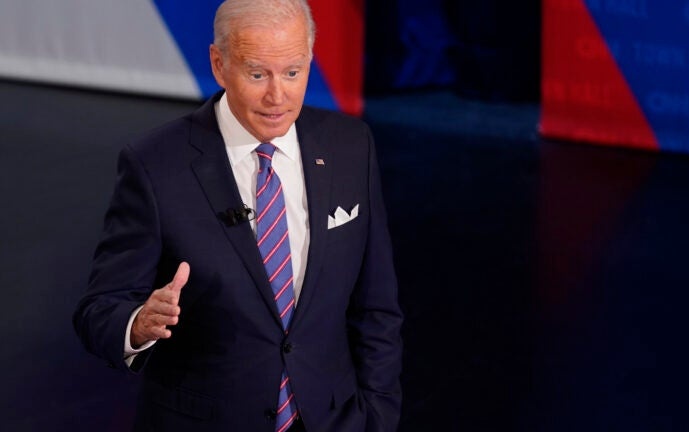 In a 90-minute town hall meeting, President Joe Biden confirms the cuts in his budget for social and environmental policies.

But the opposition of Democratic Sens. Joe Manchin and Kyrsten Sinema, as well as hardline resistance from all 50 Republicans in the 100-member Senate, has forced a smaller proposal.

Speaking in Baltimore, Maryland, Biden confirmed that a paid-leave proposal has been slashed from 12 weeks to four weeks and plans for free community college have been dropped.

The President also said the proposed raise of corporate tax from 21% to 28% — after the 2017 Trump Administration reduction from 35% — is almost abandoned. Instead, he is proposing a 15% minimum corporate tax, irrespective of deductions and loopholes.

Biden said he might back changes to the “fundamentally alter the filibuster”, used by Republicans such as Senate Minority Mitch McConnell to block any legislation. However, he was said that he was reluctant to debate the step, portraying it as a distraction, and that the budget must be passed first.

The entire “clean energy” section of the bill may be a victim, appeasing Democratic Sen. Joe Manchin of West Virginia, who is supported by fossil fuel interests.

See also EA on BBC: Biden, Republicans, and the Threat to the US System

“Congressional staffers and lobbyists familiar with the matter” confirmed that Manchin has told Biden that the legislation is being rewritten after the West Virginia Democrat told the White House of his strong opposition to the climate change provisions.

Manchin and fellow Democrat Sen. Kyrsten Sinema of Arizona have resisted advance of the budget in a 50-50 Senate where Minority Leader Mitch McConnell has pledged to obstruct any legislation.

White House spokesman Vedant Patel avoided specific comment on the budget, “the White House is laser focused on advancing the president’s climate goals and positioning the United States to meet its emission targets in a way that grows domestic industries and good jobs.”

The budget had allocated $150 billion to clean electricity, supporting utilities that switch from fossil fuels to renewable energy sources and penalizing those that do not. Experts estimated that 317,000 lives could be saved from the reduction in air pollution.

“This is absolutely the most important climate policy in the package,” said Leah Stokes, a climate change experts advising Senate Democrats. “We fundamentally need it to meet our climate goals. That’s just the reality. And now we can’t. So this is pretty sad.”

The removal of clean energy comes two weeks before the global COP26 climate change summit in Glasgow, Scotland. Biden had pledged a 50% cut in US emissions, based on the 2005 level, by 2030.

House Speaker Nancy Pelosi of California said on Friday morning in San Francisco that she is still pressing for climate change provisions: “What we’re here today about is specifically about the climate piece. This is our moment. We cannot — we don’t have any more time to wait.”

However, at least four sources “close to the negotiations” said there was no hope for the clean electricity program — even as other Democrats said its omission could jeopardize their votes for the budget.

Senator Tina Smith of Minnesota, who drafted the provisions, explained:

We must have strong climate action in the Build Back Better budget. I’m open to all approaches, but as I’ve said, I will not support a budget deal that does not get us where we need to go on climate action.