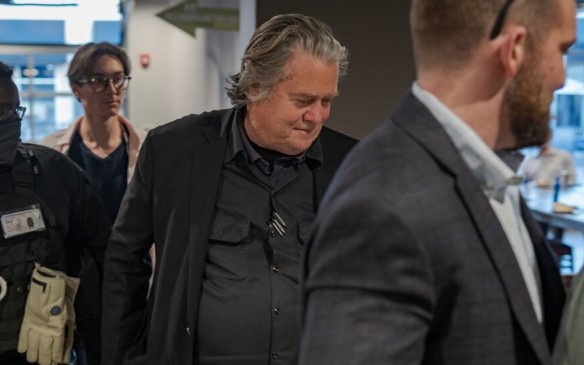 The House holds Donald Trump’s former chief strategist Steve Bannon (pictured) in contempt, for refusing to testify and hand over documents in the Capitol Attack hearings.

The vote of 229 to 202 was mainly along party lines. Only nine Republicans supported Democrats over the enforcement of the House select committee’s subpoena on Bannon.

The Justice Department will now decide whether to prosecute Bannon, with a potential sentence of up to one year in prison and/or a $100,000 fine.

Republican Rep. Liz Cheney of Wyoming, the vice-chair of the committee, summarized, “There’s a moment when politics must stop if we want to defend and protect our institutions. A violent assault on the Capitol to stop a constitutional process of counting electoral votes is that moment.”

But House Minority Leader Kevin McCarthy instructed Republicans to vote No, proclaiming that the subpoena was “invalid”.

Trump continued to push his lie about a stolen election, justifying the assault on the US Capitol: “The insurrection took place on Nov. 3, Election Day. Jan. 6 was the protest!”

Trumpist Rep. Jim Jordan of Ohio railed that the committee was harassing Bannon and organizers of the “Stop the Steal” rally on January 6. Rep. Matt Gaetz of Florida pushed disinformation about an election “polluted” by mail-in votes, later appearing on Bannon’s podcast.

Democrat Rep. Jim McGovern of Massachusetts responded, “We live in an age where apparently, some put fidelity to Donald Trump over fidelity to the Constitution. He is so feared that my Republican colleagues are going to keep denying what happened that day.”

And Cheney noted, “Today the former President suggested that the violence was justified.”

The House select committee on the Capitol Attack has voted to hold Donald Trump’s former chief strategist Steve Bannon in contempt for refusing to testify and hand over documents.

The committee unananimously voted on Tuesday to recommend the criminal charge of contempt of Congress, sending its report to the full House. The chamber is expected to vote on Thursday, authorizing the committee to pursue the criminal case in court.

Rep. Bennie Thompson of Mississippi, the chair of the committee, said:

It is essential that we get Mr Bannon’s factual and complete testimony in order to get a full accounting of the violence of January 6th and its causes.

Mr Bannon will comply with our investigation or he will face the consequences. We cannot allow anyone to stand in the way of the select committee as we work to get to the facts. The stakes are too high.

If convicted, Bannon would face a sentence of up to one year in federal prison, $100,000 in fines, or both.

Bannon promoted the Trumpian plan to block the confirmation of President-elect Biden on January 5, the day before the assault on the Capitol.

Republican Rep. Liz Cheney of Wyoming, the committee vice-chair, said before Tuesday’s vote, “Mr. Bannon’s and Mr. Trump’s privilege arguments do appear to reveal one thing, however: they suggest that President Trump was personally involved in the planning and execution of January 6th. And we will get to the bottom of that.”

Donald Trump’s attorneys have filed a lawsuit to avoid handing over documents to the House select committee investigating the January 6 attack on the US Capitol.

The 20-page complaint sues Congress and the National Archives, claiming executive privilege even though Trump is no longer in office and President Joe Biden is not asserting privilege.

The chair and vice chair of the House committee, Democratic Rep. Bennie Thompson of Mississippi and Republican Rep. Liz Cheney of Wyoming chastised the lawsuit as “nothing more than an attempt to delay and obstruct our probe.”

They explained, “It’s hard to imagine a more compelling public interest than trying to get answers about an attack on our democracy and an attempt to overturn the results of an election.”

The House select committee on the Capitol Attack will decide on a contempt charge against Steve Bannon (pictured), Donald Trump’s former campaign manager and chief strategist, next Tuesday.

Both Bannon and former Pentagon Chief of Staff Kash Patel refused to testify on Thursday, after Trump ordered former aides not to answer subpoenas.

Mr. Bannon has declined to cooperate with the select committee, and is instead hiding behind the former president’s insufficient, blanket, and vague statements regarding privileges.“We reject his position entirely.

A committee official explained that executive privilege is for protection of the interests of the country, and not of the private, political interests of a former President.

The committee will vote next Tuesday on whether to recommand that the full House issue a criminal referral for Bannon to the Justice Department,

Former White House Chief of Staff Mark Meadows and social media director Dan Scavino are scheduled to testify on Friday. Trump has commanded both men not to testify or provide documents.

A “source familiar with the matter” said the committee has temporarily postponed depositions with Patel and Meadows while lawyers discuss cooperation. Scavino has been granted an extension because his subpoena was only served last Friday.

The House select committee investigating the January 6 attack on the US Capitol has subpoenaed a Trump loyalist who was a key Justice Department official.

The committee summoned Jeffrey Clark, whom Donald Trump tried to install as Attorney General to overturn the election victory of Joe Biden.

Clark, then an Assistant Attorney General, pressed Donald Trump’s falsehoods and unsupported claims about mass voter fraud after the election and up to January 6. At a January 3 meeting, Trump tried to put him in place of Acting Attorney General Jeffrey Rosen, who had resisted Trump’s demands for the Justice Department to declare fraud.

A threat to resign en masse by senior Department officials, including Rosen and his assistant Richard Donoghue, blocked Trump’s effort.

Rep. Bennie Thompson of Mississippi, the chair of the committee, said on Wednesday:

The select committee needs to understand all the details about efforts inside the previous administration to delay the certification of the 2020 election and amplify misinformation about the election results.

We need to understand Mr. Clark’s role in these efforts at the Justice Department and learn who was involved across the administration.

The subpoena is the 19th issued in the House inquiry.

The Senate Judiciary Committee cited credible evidence last week that Clark was involved in Trump’s efforts to block the peaceful transfer of power. It citing Clark’s proposal to deliver a letter to state legislators in Georgia encouraging them to delay certification of election results, and his recommendation of a news conference announcing that the Justice Department was investigating allegations of voter fraud.

ORIGINAL ENTRY, OCT 9: Donald Trump orders former aides to defy subpoenas in House hearings over the January 6 attack on the US Capitol.

Steve Bannon, the former White House chief strategist, subsequently confirmed that he will not answer any subpoena. That statement led to a warning from the chair and vice-chair of the House select committee, Democratic Rep. Bennie Thompson of Mississippi and Republican Rep. Liz Cheney of Wyoming, that they will “swiftly consider” a charge of contempt of Congress.

The House committee, convened by Speaker Nancy Pelosi, announced in late September that it would issue subpoenas to Bannon, former White House Chief of Staff Mark Meadows, former White House social media director Dan Scavino, and former Pentagon Chief of Staff Kash Patel. All four men were alongside or in close contact with Trump, before and during his January 6 speech calling on supporters to block the Congressional certification of President-elect Joe Biden.

The committee then issued subpoenas to 11 organizers of the “Stop the Steal” rallies, which culminated in the invasion of the Capitol, assaults on police officers, and threats to kill Vice President Mike Pence and legislators. Three more subpoenas were despatched on Thursday.

Patel has also said that he will challenge the committee, claiming he is raising $250,000 for a legal defense fund, but Thompson and Cheney said he is “engaging” with them so far. Scavino was only served with his subpoena on Friday.

On Thursday, Bannon’s lawyer Robert Costello wrote the committee that his client was following Trump’s directive to invoke immunity and refuse to turn over documents, under a claim of executive privilege.

While Mr. Meadows and Mr. Patel are, so far, engaging with the select committee, Mr. Bannon has indicated that he will try to hide behind vague references to privileges of the former President.

The select committee fully expects all of these witnesses to comply with our demands for both documents and deposition testimony.

We will not allow any witness to defy a lawful subpoena or attempt to run out the clock.

Rep. Jamie Raskin of Maryland noted that Bannon left the White House in 2017, while continuing as an internal advisor to Trump after a short-term rift: “Steve Bannon was not in the executive branch and was not working for the President. Even if you make the assumption that Donald Trump has even a shred of executive privilege, how could that extend to Steve Bannon?”

Raskin, a constitutional law professor, continued, “There is no coup-against-the-government privilege a President can invoke. They are trafficking in absurdities.”

Trump said in a statement that he wrote the National Archives challenging any document release as a “dangerous assault on our Constitution”.

Raskin explained the Trump strategy: stall the committee, hoping that Republicans win control of the House in the 2022 mid-term elections.

The whole game is to drag this out as long as possible, to see whether they can mobilize enough voter suppression to get Congress to change hands. We’re not going to let people play games and sweep evidence under the rug.

Bannon was arrested in August 2020 on charges of conspiracy to commit wire fraud and money laundering, over his role in We Build The Wall, a campaign raising more than $25 million. Prosecutors said the money was for the personal use of the fundraisers.

He pled not guilty, and Trump issued a pre-emptive pardon just before leaving office. The federal charges were dropped in May, also state prosecutors in New York are reportedly still pursuing the case.