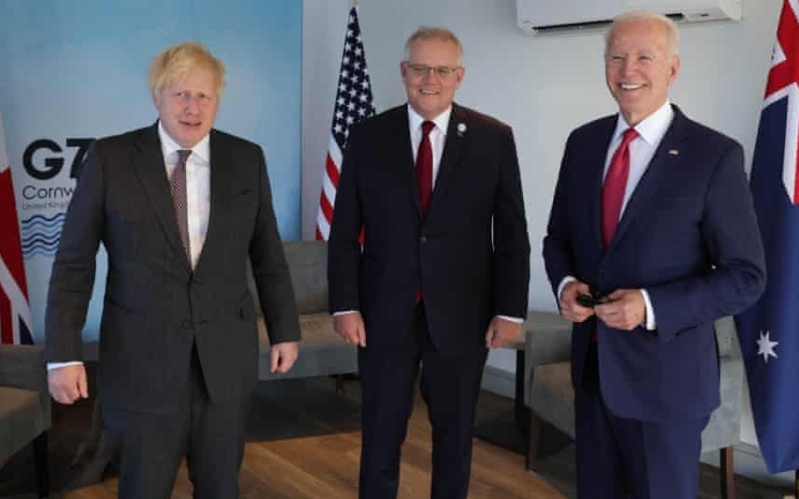 The US, UK, and Australia have announced a new defense deal, interpreted by many analysts as aimed against China’s influence in the Asian-Pacific region.

President Joe Biden unveiled the agreement on Wednesday, with the US and UK helping Australia deploy a fleet of nuclear-powered submarines. He said, in a simultaneous press briefing with UK Prime Minister Boris Johnson and Australian Prime Minister Scott Morrison:

This is about investing in our greatest source of strength, our alliances, and updating them to better meet the threats of today and tomorrow. It’s about connecting America’s existing allies and partners in new ways.

Australia will become the 7th country with submarines powered by nuclear reactors, increasing their range. Biden and Morrison said the vessels will not be armed with nuclear weapons. As a signatory to the Nuclear Nonproliferation Treaty, Canberra is banned from acquiring or deploying any nuclear arms.

The leaders did not specifically refer to China, but Morrison said, “Our world is becoming complex, especially here in our region, the Indo-Pacific. This affects us all….We must now take our partnership to a new level.”

Biden asserted, “We need to be able to address both the current strategic environment in the region, and how it may evolve, because the future of each of our nations and indeed the world, depends on a free and open Indo-Pacific enduring and flourishing in the decades ahead.”

Johnson, trying to project a “Global Britain” after the UK’s self-imposed Brexit isolation from the European Union, proclaimed “a new defence partnership…driving jobs and prosperity”.

A “senior US official” noted, “Great Britain is very focused on the concept of global Britain, and their tilt is about engaging much more deeply with the Indo-Pacific and this is a down payment on that effort.”

In its Global Review earlier this year, the Johnson Government all but ignored Europe and instead focused on the proclamation of new partnerships in the Indo-Pacific region.

The spokesman for the Chinese Embassy to the US, Liu Pengyu, chided that countries “should not build exclusionary blocs targeting or harming the interests of third parties. In particular, they should shake off their cold war mentality and ideological prejudice.”

But in a sign that Beijing is reviewing the position, neither of the Communist Party’s English-language outlets China Daily or Global Times does not mention the pact this morning.

China is not the only country disturbed by the deal. The pact terminates a $90 billion contract which Australia signed with the French company Naval Group in 2016, converting nuclear submarines into conventionally-powered vessels. The arrangement has been plagued by cost overruns, delays and design changes.

The American choice to push aside a European ally and partner like France from a structural partnership with Australia at a time we are facing unprecedented challenges in the Indo-Pacific region…shows a lack of coherence that France can only acknowledge and regret.

.
Gerard Araud, the former French Ambassador to the US, tweeted:

The world is a jungle. France has just been reminded this bitter truth by the way the US and the UK have stabbed her in the back in Australia. C’est la vie.