Tigray’s “Living Hell” for Its Women and Girls 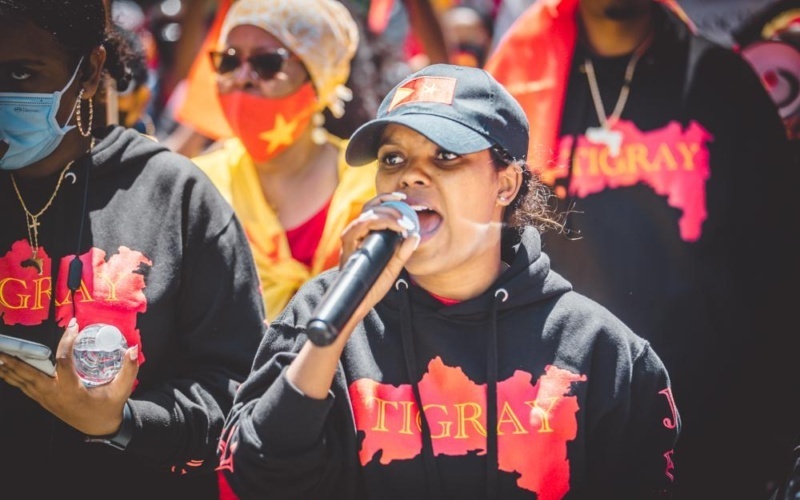 Meaza Gebremedhin speaks at a rally in Washington DC, calling for action over violence against women and girls in Tigray

“I haven’t heard from most of my family members. I’m not sure if they have been targeted by the invading forces from Eritrea and Ethiopia. I don’t know if they are alive, have been raped, or are starving to death because of lack of food.”

Meaza G. Gebremedhin is an international relations specialist and community organizer from the Tigray region of Ethiopia. Three years ago, she left for the US to pursue a Master’s degree.

From there she watches the ten-month conflict between Ethiopian forces and Tigrayan fighters which has ripped apart her home. She worries without pause about family and friends as she processes the report of sexual violence in Tigray and in the refugee camps in neighboring Sudan.

I moved to Washington DC to pursue further education in hopes that I’ll go home and help my community. I have graduated, but my hopes to go back home have been ravaged with war planes and drone attacks.

I don’t even have a place to call home. I am a stateless Tigrayan like so many across the world.

Thousands of miles adrift, Meaza takes up the fight to bring the international community’s attention to the sexual and gender-based violence and the destruction of human rights.

“Tigray has become a living hell for my people,” she says.

Rape as a Weapon of War

The UN and Amnesty International are reporting the rise of violence and the blockade of humanitarian aid. On August 26, UN Secretary-General António Guterres warned, “A humanitarian catastrophe is unfolding before our eyes.”

Omna Tigray, launched by Tigrayan professionals after the start of the conflict last November, is pursuing economic development and advocacy to raise awareness of human rights conditions.

But as Omna called out to the global community and the UN, it was struck by a revelation of the difficulty of the task.

The organization received audio of a leaked call among UN officials which downplayed the reports of sexual and gender-based violence as “media hype”. The discussion, between Ethiopian country offices of various UN agencies, was supposed to establish a unified response to the increasing reports of rape as a weapon of war. Instead, the comments belittled the issue and the women involved.

Amnesty noted in an August 11 report:

Multiple forms of sexual violence — including rape, gang rape, sexual slavery, sexual mutilation, and torture — have been perpetrated against Tigrayan women and girls by Ethiopian government forces — the ENDF [Ethiopian National Defense Force] and Amhara Special Forces, and their allied Fano militias — as well as by the Eritrean forces that have been fighting alongside the Ethiopian military.

The ENDF and Prime Minister Abiy Ahmed’s Government have denied the reports of rape by their forces. But the victims, in Tigray and in the refugee camps, are sharing their accounts.

For Advocacy and Global Attention

A women-led organization, Omna has been defending human rights of Tigray’s women and girls through social media campaigns and outreach, petitions, and documentation of violations. The organization summarizes:

Much like the aid blockade, sexual violence has been used as a weapon of war since the start of the conflict by all invading forces, the Eritrean and Ethiopian forces, and the Amhara militias and special forces. Survivors of sexual violence have not been able to access the medical and psychological support they need, as a result of insecurity, the destruction of health infrastructure, as well as the restriction of humanitarian organizations and aid.

Meaza hasn’t heard from her family or friends: “I’m worried about the safety of each and every Tigrayan. It’s about their collective safety and identity.”

She continues, “I’m trying to get the world know about what’s happening on the ground, most importantly for the protection of the vulnerable ones, including the women that have been faced with harrowing weaponized rape and weaponized starvation.”

The Voices of Tigray

Defying imminent threats, Tigray’s women and girls share their stories of survival of horrific acts. Mona Lisa Abraha, 18, recalls her fight against rape attempts by Eritrean soldiers. As she tried to defend herself, her attackers shot her in the hand and arm, which later had to be amputated.

Mehrawit, a mother of two, was kidnapped by five men when she was walking with her children. The Eritrean soldiers took them to a small building and “gang-raped her repeatedly, fracturing her spine and pelvis”.

They are the voices for many more. Omna explains:

The number of sexual violence survivors is not known because the Tigray region has been closed off. The healthcare infrastructure has been destroyed, and the reporting mechanism along with it. Stigma associated with sexual violence skews the data.

What is known, however, is that the majority of survivors of brutal SGBV have not had access to medical and psychosocial services they need.

The organization sets out the physical and mental trauma of “bleeding, pain, incontinence, anxiety, and depression”, as well as sexually-transmitted infections, and pregnancies with no access to family planning and abortion services.

The UN health agency UNFPA describes how “this destruction has become a daily reality for women and girls”. They tell the agency of “running from place to place without food or shelter and constantly living in fear after being displaced”, always facing the threat of sexual violence.

But Is Anyone Listening?

On August 23, the US Treasury sanctioned Gen. Filipos Woldeyohannes, the Chief of Staff of Eritrea’s Defense Forces, for serious crimes against humanity in Tigray.

But Meaza notes, “Some of the moves taken by the US are encouraging, but they aren’t enough. They aren’t enough to have an impact on what we are working towards, which is the Tigrayan genocide.”

Calling for “strong sanctions against the Eritrean as well as Ethiopian governments” and freezing of assets used to buy arms, she speaks of her disappointment in the “reluctance” of the “international political realm”:

It makes you feel helpless, and sometimes educated people like myself are forced to believe that may be the only way out of this is an armed struggle. But I know that’s not the solution. Political differences cannot be solved through the military or armaments.

Omna observes “Unfortunately, the world is awake, it has just chosen not to act in the manner that the dire situation deserves. Deaths can still be prevented, however, and the genocide still needs to be stopped. It remains to be seen if the world will choose to intervene.”

The month of August is supposed to be a joyous one for the women and girls of Tigray. They celebrate Ashenda, expressing their freedom and womanhood in song and dance as they wear their finest jewellery and clothes.

But Omna notes, “This year for Tigray’s women and girls, Ashenda has been more somber as we recognize the pain, but also the resilience, of Tigray’s women as their bodies have been turned into battlefields.”

UN Secretary General Guterres says, “The human price of the war is mounting by the day….In every sense, the future of Ethiopia is at stake.” He declare that there must be “accountability for the atrocious acts in the strongest possible terms”.

Sometimes this slow action of the international community makes us question our beliefs. But I continue to urge people of the diaspora to remain resilient and strong. To understand that we’re being tested for a reason. And there is always light at the end of the tunnel.