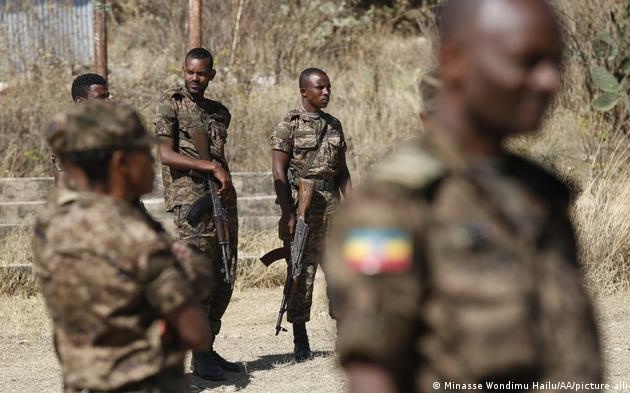 The US Treasury has sanctioned Gen. Filipos Woldeyohannes, the Chief of Staff of the Eritrea’s Defense Forces, for serious crimes against humanity in neighboring Ethiopia’s Tigray region.

The Office of Foreign Assets Control said in a statement that it was action over the Eritrean military’s operations in Tigray, where local groups — including armed factions — are trying to claim autonomy.

The EDF are responsible for massacres, looting, and sexual assaults. EDF troops have raped, tortured, and executed civilians.

OFAC said EDF soldiers are destroying properties and ransacking businesses, calling from their permanent removal from the region.

More than 5.2 million people have been displaced, and 400,000 face a “famine-like” situation, according to the UN. Humanitarian organizations report blockages of aid and medical help.

Martin Griffiths, the head of the UN’s Office for the Coordination of Humanitarian Affairs (OCHA), said, “We need to change the circumstances that have led to the slow movement of aid – we need the conflict to stop.”

Conflict erupted on November 4 between federal Ethiopian troops and Tigray’s special forces. More than nine months after the military campaign by the Government of Prime Minister Abiy Ahmed, the conflict has spilled into the neighbouring regions of Amhara and Afar, adding to humanitarian needs.

Human rights activist Kaleab Belay Nega called for the US to impose sanctions on the Ethiopian Government as well as the Eritrean military: “We are witnessing a man-made famine, killing 100s of kids every day.”

The Ethiopian gov has been obstructing humanitarian aid to Tigray for the past 9 months affecting 5million people. We are witnessing a man made famine, killing 100s of kids everyday. @StateDept must put a sanction on Ethiopia to stop #TigrayGenocide.https://t.co/6poHQ7ugsp

Speaking to journalists on World Humanitarian Day last Thursday, UN Secretary General António Guterres expressed “grave concern” about the deteriorating conditions, citing the “unspeakable violence” against women and others. He called for a ceasefire, guarantee of unrestricted humanitarian access and public services, and an “Ethiopian-led political dialogue to find a solution”.

The Ethiopian Government has denied the reports of abuses, but multiple witnesses are claiming rape, sexual assault, and sexual mutilation.

A ceasefire was promised in June, but reports indicated that Eritrean troops remain within Tigray and are committing serious human rights abuses.