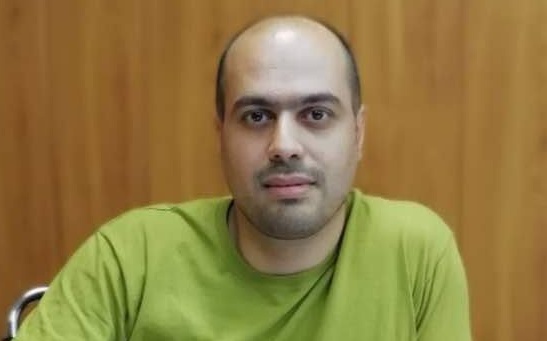 Iranian journalist Masoud Kazemi (pictured), released as a political prisoner in April 2020, says he is still being threatened abroad by Iran’s intelligence services.

Kazemi, who was editor of the monthly magazine, was free from Tehran’s Evin Prison after 300 days. He had been sentenced to 4 1/2 years acting against national security and insulting the Supreme Leader, but was among thousands of prisoners freed early because of the Coronavirus pandemic.

Upon his release, he tweeted, “The nightmare is officially over,” but he was soon summoned by the intelligence branch of Revolutionary Guards.

Officers demanded his cooperation for months, until Kazemi and his wife left Iran for Turkey four months ago, hoping for asylum in a third country.

The intelligence services were not far behind. Kazemi told Radio Free Europe/Radio Liberty’s Golnaz Esfandiari that four days after he purchased a Turkish SIM card, his former interrogator called to say hello.

Iran’s intelligence operatives have kidnapped journalists in other countries and taken them back to the Islamic Republic for imprisonment. In December 2020, Ruhollah Zam was executed, 14 months after he was seized in Iraq.

In July, four Iranian intelligence officials were indicted in a US federal court over an alleged plot to abduct New York-based journalist Masih Alinejad, three Iranians in Canada, and another in the UK. The US Treasury followed with sanctions on September 3.

Kazemi told RFE/RL that he was first summoned after his release because he spoke to the media about other political prisoners. Playing an audio of one of the calls, intelligence officers asked him to spy on his friends and contacts, including journalists, political activists, and women’s rights advocates.

When the journalist refused, the officers threatened to open a new case against him and to resurrect an old case against his wife, Shima Tadresi, over her criticism of compulsory hijab. When Kazemi took a public-relations job in an accounting firm, he said the Revolutionary Guards threatened the firm’s manager, who terminated the employment.

Before they used to quickly arrest journalists, but now I know numerous journalists who have been summoned, harassed, interrogated. Their computers and other equipment — including cell phones — are confiscated and the content is used to threaten them and ask them to cooperate.

When a journalist gets arrested, it is reported in the media and rights and media groups react, as they did when I was arrested. But pressuring journalists is less costly.

Iran is among the leading countries in the world for imprisonment of journalists, intelligence services have been arrested for years of pressuring correspondents who work for foreign outlets. After the mass protests over the disputed 2009 Presidential election, they stepped up intimidation of BBC Persian staff with freezing of assets, sexual harassment, and threats of detention of relatives still in the Islamic Republic.

Nazenin Zaghari-Ratcliffe, an Anglo-Iranian national who formerly worked for BBC Media Action, was detained in April 2016 at Imam Khomeini airport in Tehran. She served a five-year sentence in Evin Prison, and is still not allowed to leave the country for the UK to rejoin her husband and young daughter.