“The Taliban Warned My Family: Stop Her from Protesting” 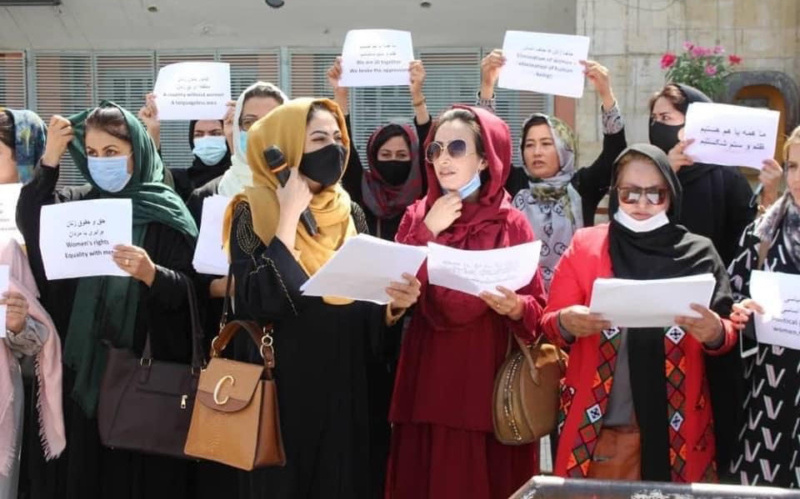 Afghan women rally for their rights and political and cultural space, Kabul, September 2021 — Samira Khairkhwah is in the center in the yellow headscarf.

The demonstrators were women, calling for their rights after the Taliban’s takeover of Kabul and almost all of the country last month. The response of the fighters only bore out both their concerns and their cause, shadowed by restrictions, threats, and violence. Journalists and photographers covering the march in Kabul were arrested, the Taliban angered by videos of women being beaten.

Samira Khairkhwah, 24, a social activist, was one of the women on the streets.

“I Am Not Scared”

After marching last week in Kabul and in Herat, in the west of Afghanistan, Samira had to leave her home. “I was leading a protest to advocate for our civil rights along with many other brave women, until I was forced to move temporarily to Mazar-e-Sharif” in northern Afghanistan.

They called my family and warned them to stop me from participating in the protests.

My family is worried for my safety, but as an educated woman, why will I stop asking for what’s my fundamental right?

All I’m asking is to let us continue our education and work. Our religion has rights for women and what we are asking for is nothing out of the norm.

Samira was a spokesperson for an energy provider, but “had to stop working when the Taliban shut the doors for us”. Immediately after the group entered the capital on August 15, she was forced to remain inside her home as the Taliban cited reasons of “security”.

But Samira would not stay there. She noted that other women were refusing to hide, and that their pursuit of their education, careers, and lives was being supported on social media. She says, “I am not scared of the Taliban because what I am asking for is basic fundamental rights for women.”

A Fight Against A Dark Future

Samira listened as Taliban spokesperson Zabiullah Mujahid vowed, “There’s not going to be any discrimination against women.” But he added the caveat that “of course” this would be “within the frameworks that we have”.

Mujahid assured, “Our women are Muslim. They will also be happy to be living within our frameworks of Sharia.”

Samira was sceptical, “They are not telling the truth. The reality on the ground is different.”

Despite her family’s concern and the Taliban’s warning, she went outside. She not only walked in Kabul, but joined the women in Herat, more than 800 km (500 miles) away.

Why? She wants “to get back to my work again”.

For Samira, that hope is now linked to the wider ambition of many others, “If women’s rights have to be honored, we need to continue this fight. They are trying to shut us down, but if we don’t fight today, the future will be dark for Afghan women.”

As we speak, she pauses for a message. She returns to explain, “I just got the news that some of my colleagues protesting today were threatened with guns to stop the demonstrations.”

“They Can’t Suppress Our Voices”

For a moment, she is quiet. But it is only for a moment. She regains her hopes:

They will have to agree to let women go back to being a part of the working society with rights and freedom to work. How will this country progress if we don’t let the women get back to the workforce? They can’t suppress our voices. We are an educated generation.

And if the threats, the tear gas, the beatings — and possibly worse — are ever present?

Samira is unwavering, “While so many left the country, I want to stay back so I can work towards reclaiming our lives in our home. I will continue to raise my voice, whether it’s on the ground or through social media.”

She gives me a message: “The world media needs to highlight our voices and tell our stories.”