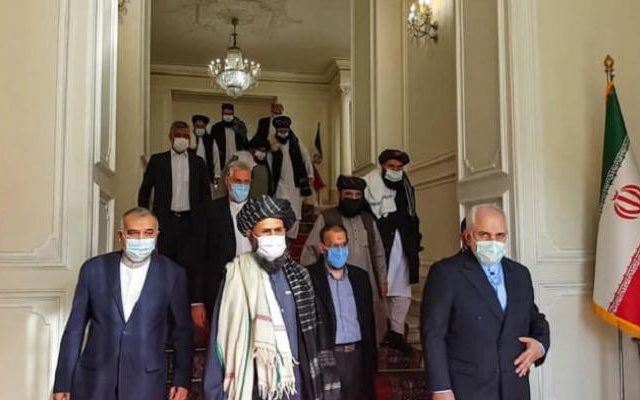 In his first public statement after the change of power in Kabul, Iranian President Ebrahim Raisi maintained the line of avoiding direct mention of the Taliban:

Peace, calm, and security in Afghanistan is very important to us and we’re monitoring the news and developments in our neighboring country very closely….

Iran will work towards stability, which is Afghanistan’s primary need today, and as a neighbor and brotherly country invites all groups to reach a national agreement.

According to Amwaj Media, Raisi has mandated that outgoing Foreign Minister Mohammad Javad Zarif report directly to him on developments.

ORIGINAL ENTRY, AUGUST 16: Iran’s officials are taking a cautious line over the Taliban’s sudden takeover of Afghanistan’s capital Kabul and almost all of the country.

The Secretary of the Supreme National Security Council, Ali Shamkhani, used Twitter to put out the message on Monday, “Like the past 40 years, we support the people of Afghanistan and their will and resolve.”

Shamkhani did not refer to the Taliban. Instead, he jabbed at the US as he cited a “challenging meeting” with Afghanistan President Ashraf Ghani in Kabul in 2018.

Ghani fled the Afghan capital on Sunday, as the Taliban moved into the city, including the Presidential palace.

Outgoing Foreign Minister Mohammad Javad Zarif also tread carefully. He noted former Afghan President Hamid Karzai — who is part of a delegation in Pakistan discussing a transition of power — but not the Taliban.

Iran welcomes announcement by @KarzaiH on forming a Coordination Council by Afghan leaders.

We hope that it can lead to dialogue & a peaceful transition in Afghanistan.

In 1998, during five years of Taliban rule across Afghanistan, the group killed ten Iranian diplomats and a journalist in Iran’s consulate in Mazar-i Sharif in the north of the country. Tehran cut diplomatic relations and supported the Northern Alliance, part of the Afghan coalition ousting the Taliban from Kabul in 2001. Iran has been the leading outside actor in Herat, Afghanistan’s third-largest city, supporting the local forces of Ismail Khan.

However, Iran has sought a channel with the Taliban in recent years. After the Biden Administration’s announcement of a US withdrawal, Tehran tried to broker discussions between the Taliban and the Afghanistan Government, paralleling the international community’s effort in Qatar.

As the Taliban takeover appeared imminent, Iran’s initiative was overtaken by its seeking of assurance that Iranian personnel and positions in Afghanistan would not be attacked. Herat quickly fell to the Taliban last week, with Ismail Khan fleeing.