EA on Monocle 24, Pat Kenny Show, and Radio Free Europe: Who is Accountable for Afghanistan? 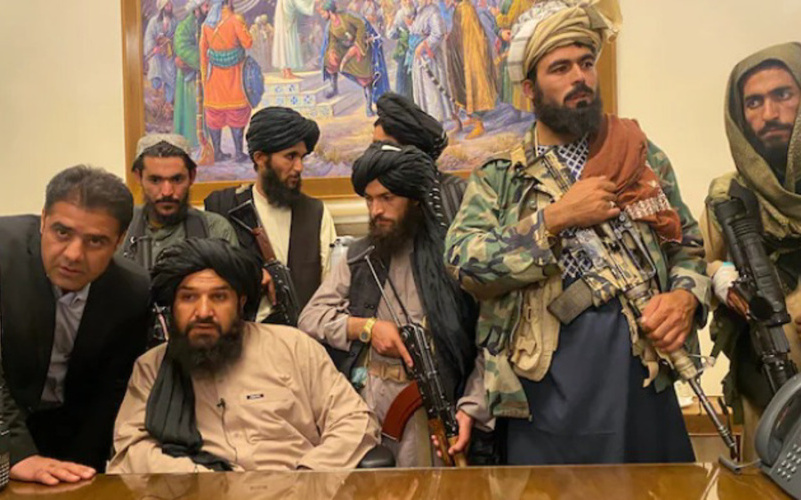 Taliban fighters in the Presidential Palace after the departure of Afghanistan’s President Ashraf Ghani, Kabul, August 15, 2021

Further analysis on Monday, in a video interview with Radio Free Europe/Radio Liberty:

I anticipated this weeks ago. As soon as the Biden Administration announced the withdrawal of all American military personnel, followed by international coalition partners, there was no need for the Taliban to continue with political talks on a power-sharing arrangement. They could just force of arms to sweep through the country.

The University of Birmingham’s David Dunn and I also spoke with BBC outlets on Monday about the developing situation in Afghanistan, reflecting on past and present US policy and looking to the future.

Listen to David Dunn on BBC West Midlands from 14:49

The symbolism of America withdrawing from its major base, the Bagram airbase, without even a proper handover — they just left in the middle of the night and switched the lights off — undermined the confidence of the large and well-funded Afghan armed forces. When it came to it, they melted away, rather than fight for something they didn’t believe they could win.

Listen to Scott Lucas on BBC Three Counties from 39:05

The longer-term issue, which had bedevilled various governments since 2001, was that hundreds of billions of dollars had been put into Afghanistan, but at the end of the day the Afghan Government did not have legitimacy across the country. It was seen, rightly, by many as corrupt, inept, and derelict in its duties, and it did not set up effective institutions, including armed forces.

ORIGINAL ENTRY, AUG 16: On the day after the Taliban took power in Afghanistan’s capital Kabul, I spoke with Monocle 24’s Emma Nelson and Dublin NewsTalk’s Pat Kenny Show about accountability for the sudden collapse of the Afghan Government and armed forces — and what happens next.

The conversations were full and frank, complementing Nelson’s in-depth conversation with journalist Lynne O’Donnell — who left Afghanistan on Sunday morning — and Kenny’s chat with reporter Hadees Paress, who is still in Kabul.

Listen to Pat Kenny Show from 4:18

I think Biden Administration statements have been not only thin but despicable. To use the term “Mission Accomplished” is redolent of what George W. Bush said in May 2003, after Saddam Hussein fled the American war in that country.

Let’s cut to the facts. If the Americans were there after 9-11 to deal with a terrorist threat, that terrorist threat had left for Pakistan in 2002. That begs the question: what were you doing for the subsequent 19 years?

It’s time to stop looking at the Americans first. You have to look at other countries, starting with their neighbors Iran and Pakistan. What will countries like China do — will it work with the Taliban in the longer term?…

But we won’t have a refugee crisis — because Afghans won’t be able to get out.