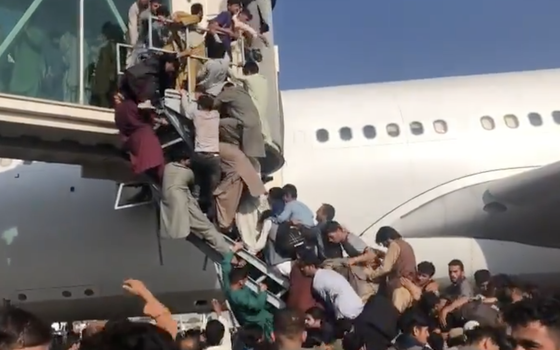 Afghan men desperately trying to get onto a plane at Kabul airport, August 16, 2021

Before Biden’s statement, we discussed the context around the US withdrawal and the Taliban takeover in Kabul. Immediately afterwards, I dissected a speech which began with an assertion of “American interests” and never once referred to the Afghan people. And in a later segment, I extended the analysis, alongside US political commentator Ameshia Cross.

Biden’s gamble is: you get the short-term bad publicity, you get the comparisons with Vietnam, but after Labor Day, people will be looking at something else and Afghanistan will be on the inside papers of the newspapers.

As an analyst, I can understand Biden’s reasoning that we don’t put more American resources and troops into Afghanistan.

As a person, I am saddened and almost furious at a narrow, sometimes deceptive “America First” approach to this.

That notion of “It’s American Interests” not only sidelines the Afghan people, it sidelines the idea that America was in Afghanistan in part because of the region.

So where is America in the region now?

Biden may have covered his backside at home, but the way this was mismanaged gives this impression that American walked out of the building and handed the keys to the Taliban — and said about the people inside, “They’re your responsibility.”