UPDATE: Assad Regime Blocks Chemical Inspections, May Have Destroyed Evidence of Its Attacks 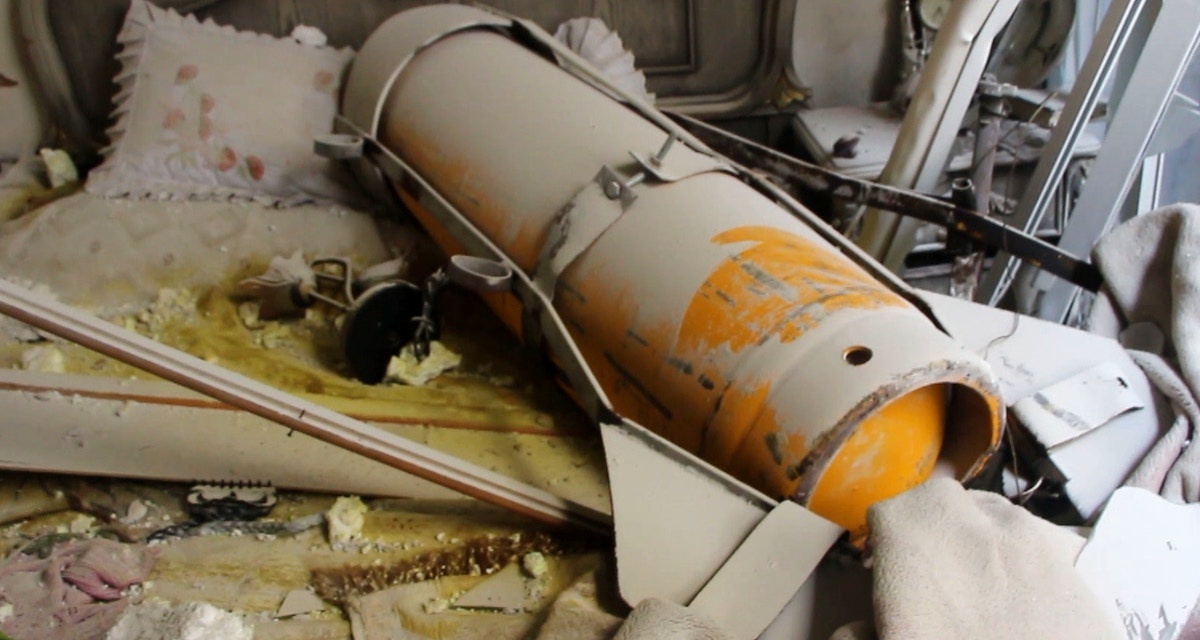 A cylinder which released chlorine gas into a building in Douma, Syria on April 7, 2018, killing 43 people

UN Security Council members have backed the call of the Organization for the Prohibition of Chemical Weapons for the Assad regime to provide more information regarding the destruction of evidence of its chemical attacks.

The members acted on the OPCW’s report citing the destruction of two cylinders involved in the April 2018 chlorine attack on Douma near Damascus, which killed 43 civilians.

UK Ambassador Barbara Woodward explained, “This incident represents not only the highly concerning failure by Syria to comply with important OPCW requests, but also unauthorized interference with evidence central to an ongoing high-profile investigation.”

At #UNSC on #Syria chemical weapons,
UK calls on Syria to comply with @OPCW,
and commends the OPCW Technical Secretariat's "tireless efforts to support Syria on the road to compliance." pic.twitter.com/yNcOJ8xiGq

Ireland’s Ambassador Brian Flynn upheld the “strong professional, impartiality, and integrity” of the OPCW, which has been under a sustained disinformation attack by Russia, the Assad regime, and allied activists. He said the Assad regime “must fulfil its legal obligations” to ensure the destruction of all stocks of chemical weapons.

Moscow continued to denigrate the OPCW as “a tool to punish the ‘unwanted’ for the sake of some states’ geopolitical ambitions”.

The Assad regime’s Bassam Sabbagh maintained the line that the cylinders had been destroyed in a June 8 Israeli airstrike, 60 km (49 miles) from where they were supposedly being held.

ORIGINAL ENTRY, JULY 24: Syria’s Assad regime continues to block inspections of its chemical weapons facilities, and may have destroyed vital evidence of its attacks.

In his latest report to member states, the Director General of the Organization for the Prohibition of Chemical Weapons documents the obstruction of the regime.

After its sarin attacks of August 2013 near Damascus, killing more than 1400 people, the Assad regime was supposed to give up all chemical stocks and destroy its facilities. However, it continued attacks with the nerve agent sarin as well as with chlorine, which is not banned under the Chemical Weapons Convention.

The UN and OPCW have documented almost 40 attacks, while the Global Public Policy Institute has recorded more than 300.

OPCW Director Fernando Arias noted in a report in early June that the regime had likely or definitely used chemical weapons at least 17 times. He noted the “disturbing reality” about the failure of the regime to fully declare its chemical weapons, facilities, and precursors — including “the presence of a new chemical weapons agent found in samples collected in large storage containers in September 2020″.

But the regime has refused to grant visas to OPCW inspectors. And on July 9, it declared that vital evidence had been destroyed in an airstrikes on a military site — which housed a former chemical weapons facility — on June 8.

The evidence included two cylinders used in chlorine attacks on Douma, near Damascus, on April 7, 2018. Forty-three civilians were killed when one of the cylinders, embedded in the roof, released chlorine which funneled through a residential building.

Russia, the Assad regime, and their supporters have pursued a disinformation campaign for years to deny any regime responsibility. However, OPCW inspectors have concluded that there are “reasonable grounds” to conclude chlorine was used, and an Investigations and Identification Team is assessing responsibility for the attack.

Arias noted that the claimed site of the cylinders’ destruction is 60 kilometers from where they had been stored, breaking the condition “that [the regime] was not to open, move, or alter the containers or their contents in any way without seeking the prior written consent of the [OPCW] Secretariat”.

Israeli warplanes reportedly struck Assad regime targets across Syria on June 8, including near the capital Damascus and the city of Homs in the center of the country.

Specific targets were not identified.

The regime had refused permission for the OPCW to move the cylinders to The Hague for inspection. The organization then told Assad’s officials to keep them under guard until they could be investigated in Syria.

No Completion of Required Measures

The Secretary General wrote that the OPCW will now seek “all relevant information regarding the movement
of the two cylinders and any remains of their destruction”.

Arias also followed up on the OPCW’s suspension of Syria’s rights and privileges in April, because of the regime’s failure to provide information and allow investigations.

He summarized that the regime had failed to meet the 90-day deadline to declare chemical facilities, stocks, and precursors and to redress outstanding issues.

“At the end of the 90 days, the Syrian Arab Republic had not completed any of these measures,” the Secretary General summarized.