UPDATE: Did Iran’s Revolutionary Guards Try — and Fail — to Detain Another Tanker? 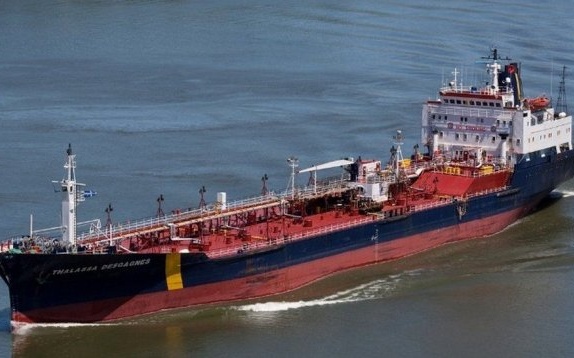 An unnamed UK official claims the crew of the Asphalt Princess (pictured) foiled an attempted hijacking by Iranian attackers, disabling the tanker’s engines.

The source said the heavily armed Iranians left the vessel early Wednesday morning, after boarding about 4:30 p.m. on Tuesday, when US and Omani warships approached.

A US official claimed, “Our aircraft photographed the Iranian gunmen onboard and observed them removing something from the ship as they departed.” A US Navy guided-missile destroyer was despatched, but arrived after the gunmen had left.

He said the incident appeared to be an “Iranian state-sponsored shakedown by Iranian forces”. The Asphalt Princess’s crew said they were assaulted and the master was held at gunpoint.

A US Central Command spokesperson said, “We are looking into the incident, but do not have an understanding of what the Iranians were doing at this time, or why they would impede the transit of this legitimate commercial vessel.”

While other Iranian officials are denying involvement in the hijacking of the Asphalt Princess, the Revolutionary Guards are trumpeting their capability for aggressive action.

Commander-in-Chief Maj. Gen’l Hossein Salami, speaking on the sidelines of a ceremony honoring an Olympic medalist, said, “Our response to the enemies is destructive and will fill them with regret. We advise them not to enter the arena of confrontation with the Iranian nation, because we are firm and steadfast.”

London-based Argus Media says it has an audio recording of the conversation between a crew member of the Asphalt Princess and the UAE Coast Guard, as the tanker was being boarded by gunmen.

The site says the crew member reported “5-6 Iranians” on board, with the ship drifting. Asked what the Iranians wanted, the crew member said he did not understand and suggested that the Coast Guard speak directly with the gunmen.

However, the account of the recording has a curious detail, with the crew member saying the vessel had left from the port of Bandar Abbas in southern Iran. There is no record of the Asphalt Princess being in Bandar Abbas — instead, it had been travelling from the UAE to the Omani port of Sohar.

ORIGINAL ENTRY, AUG 4: Iran’s Revolutionary Guards have been accused of trying to detain a tanker in the Gulf of Oman on Tuesday.

After initial confusion among Iranian officials, the Revolutionary Guards eventually joined the Foreign Ministry in denying any involvement in the boarding of the Panamanian-flagged bitumen tanker Asphalt Princess at 4:30 p.m. local time.

Multiple reports said eight to nine “heavily armed” gunmen boarded the tanker. Four other ships — the Guyana-flagged Queen Ematha, the Hong Kong-flagged Golden Brilliant, the India-flagged Jag Pooja, and the Vietnam-flagged Abyss — reported they were “Not Under Command” about the same time, for reasons that are still unclear.

The Asphalt Princess slowed moved towards Iran throughout Tuesday. However, on Wednesday morning, the UK Maritime Trade Operations agency and Lloyd’s reported that the gunmen left the tanker, which began moving in the other direction towards Oman.

Did Iran’s Guards Back Down?

In July, the Asphalt Princess, owned by the Emirati free zone-based Glory International, had travelled from the UAE to Oman, according to shipping records. On Tuesday, it was about 60 nautical miles (111 km) east of the Emirati port of Fujairah when it stopped.

British sources believe Asphalt Princess has been hijacked. They are working on the assumption Iranian military or proxies have boarded vessel https://t.co/2eETCX9i74

From Iran, there were confusing and contradictory signals. The Foreign Ministry’s spokesman issued a strong denial and argued that others were spreading false claims.

But the Iranian newspaper Entekhab said the Revolutionary Guards, through its outlet Fars News Agency, were claiming responsibility.

Neither the Farsi-language or English-language sites of Fars made the claim, and about an hour later, a spokesman for the Iranian armed forces told the agency that “contradictory reports… about a ship hijacking is a type of psychological operation aimed at setting the scene for new adventurism”.

The commander Abolfazl Shekarchi blamed the US, Israel, and Saudi Arabia for the reports. He repeated the Foreign Ministry’s line that Iran’s naval forces “are ready to provide any assistance and dispatch relief units if necessary and at the request of foreign vessels”.

However, the Asphalt Princess continued its movement overnight towards the Iranian coast, shadowed by a plane from the Omani Air Force and tracked by UK officials. London and Washington both expressed concern over the incident.

The change in direction, back towards Oman, was reported about 9 a.m. local time on Wednesday.

The Context of A War on Shipping

The attempted shipjacking is in a context of detentions and attacks on shipping in recent years, escalating this spring and summer.

In 2019, with tensions rising between Tehran and the Trump Administration, the Revolutionary Guards detained and attacked a series of ships in the Persian Gulf. Among the vessels taken was the MV Riah, another ship of the Asphalt Princess’s owners, with its 12 Indian crew held in Iran throughout July.

The UK-flagged, Swedish-owned Stena Impero was seized in July 19 in the Strait of Hormuz, in retaliation for authorities in Gibraltar, a British overseas territory, seizing an Iranian supertanker accused of violating European Union sanctions by transporting oil to Syria. Both tankers were released in September.

Israel has reportedly carried out “several dozen” attacks on Iranian shipping since 2019, particularly on tankers moving oil to Syria. A Revolutionary Guards logistics ship, off the coast of Yemen, and one of the Iranian navy’s largest vessels also suffered explosions this spring.

Iran’s forces are suspected of hijackings and attacks in recent months. In January, a South Korean tanker was seized on the pretext of concern over “pollution”, as Iran pressed Seoul to unfreeze Iranian oil revenues held in banks due to US sanctions.

Last Thursday, a drone swarm fired missiles into the Israeli-linked tanker Mercer Street in the Gulf of Oman, killing two crew. The US, UK, and Romania have joined Israel in blaming Tehran for the strike.

See also EA on The Newsmakers: Iran, Israel, and the War on Shipping
US and UK Join Israel in Blame of Iran for Attack on Tanker, Killing 2 Crew