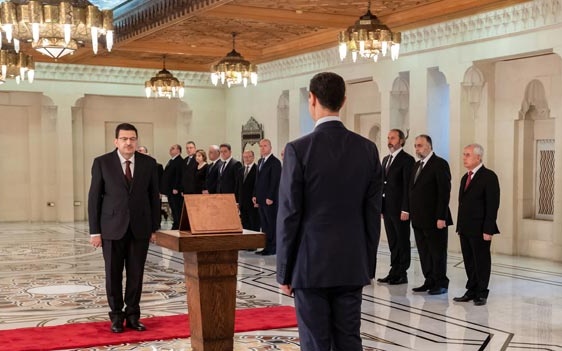 The Cabinet has issued a vague statement about “a work strategy and plan to implement the directives of President Bashar al-Assad”.

Tuesday’s statement follows Assad’s swearing-in of ministers and chairing of a Cabinet meeting last Saturday. It proclaims, without no reference to specific measures, that the “new plan” will “improve service and livelihood conditions, increase production, invest self-resources in an optimal way, support micro and medium enterprises and expand them, and find an appropriate environment for investment in different sectors”.

The Cabinet did not refer to shortages in regime-held areas. Instead it spoke of “intensifying efforts to monitor markets, control prices, enhance work of institutions of positive intervention as well as enhancing the role of the national media as a link between the official and the citizen”.

ORIGINAL ENTRY, AUG 15: Bashar al-Assad has implicitly recognized the economic crisis in regime-held areas of Syria, saying that production rather than security is now the priority.

Assad issued the statement as he chaired a session of the Cabinet, installed earlier this month.

He moved away from his previous insistence that the regime would “regain every inch” of Syria, even though Turkish-backed opposition groups hold part of the northwest and a US-supported Kurdish authority controls much of the northeast.

He declared that regime had “liberated the largest parts of the Syrian territories from terrorism”, but said the focus is now “production and finding job opportunities”.

His rambling declaration gave no details of any measures to deal with the fall of about 70% in GDP and Government spending since the Syrian uprising began in March 2011.

Food prices have risen almost 250% in a year in regime areas, with sharp reductions in subsidies for essentials such as bread. There are regular blackouts and shortages, including of petrol, with the regime unable to fill tenders for key imports.

Last month, as he was inaugurated after a staged election, Assad blamed conditions in neighboring Lebanon, where a financial crisis has affected the accounts of the regime elite and many Syrian businesses and individuals.

Assad did not explain on Saturday how production and jobs could now be recovered, given the ongoing political and economic problems in Lebanon.

Instead he said vaguely:

Seeing all those details systematically is the way that makes us tackle every single status with a specific way and not to collect all these elements with each other and reach to nothing, but staying in the place.

When we see this vision accurately we can convey it to the citizens clearly and at that point the general vision in Syria will be clear and our dialogue will be objective and so the criticism and discussion in all issues, and then we all can be immune ,and when I say all, I mean even the officials, as some of them get influenced with propaganda, when the issues are clear in their details, all become immune against the external propaganda that mainly focus on the citizen to turn him into an enemy to the state and to the homeland as a result.