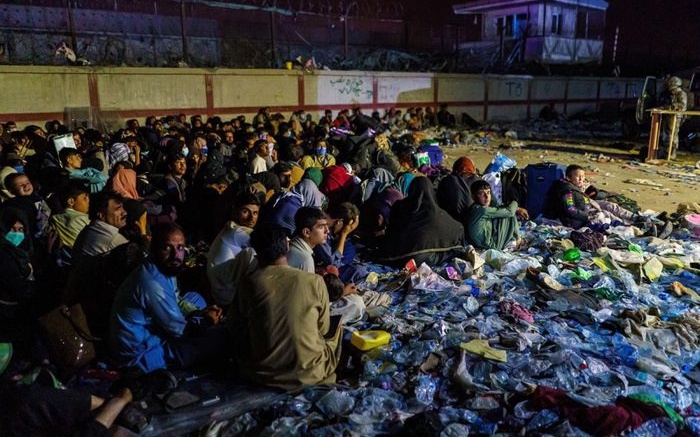 The decades-long conflict in Afghanistan was always far more than a simple Taliban v. the Afghan Government or a US-led War on Terror.

For Afghanistan is not a single country in the sense of authority or a legitimate system accepted by the vast majority. Instead, beyond the capital Kabul, it is more a mosaic of local areas with local factions — among them the Taliban — seeking rule and profit.

Thursday’s suicide bombing by the Islamic State Khorasan Province (ISIS-K) of the crowd outside Hamid Karzai International Airport, killing up to 170 Afghans and 13 US troops, highlights that mosaic.

The Taliban will try to establish a national government. With their radical interpretation of Islam and politics, they are likely to continue violence, repression, and denial of rights to many sections of Afghan society. However, they do not yet “control” Kabul and parts of Afghanistan.

To understand that lack of control, and the instability and insecurity likely to persist, one has to begin with the relationships between the Taliban and other groups, including ISKP and the Haqqani Network.

See also EA on Monocle 24 and Australia’s ABC: Forget the Afghans, All Hail the 2nd War on Terror

The Islamic State’s lightning advance across Iraq and Syria in 2014, and its declaration of a “Caliphate”, spawned affiliates. These groups promoted the ideological line, and receiving assistance from the core of ISIS, but developed from local conditions.

One of these was ISIS-K, established in January 2015 and naming itself after “Khorasan”, an area from the 6th century from Iran to the western Himalayas. The group is made up of local militants and former Afghan and Pakistani Taliban, seeking an even more radical ideology and implementation, as well as some former Al Qa’eda members. Spanning the Afghan-Pakistan border, its centre is in eastern Afghanistan in the Nangarhar and Kunar Provinces.

As the Taliban pursued authority across Afghanistan, through military operations and then political talks, ISIS-K sought a publicity foothold and recruitment of members through attacks on civilian targets. In July 2016, the bombing of a protest rally in a square in western Kabul killed more than 80 people, mainly Shia Hazaras, and wounded more than 230. Schools providing education for girls were targeted. A Kabul maternity ward, run by the international medical charity Médecins Sans Frontières, was raked with gunfire in May 2020, killing 24 women, children, and infants.

Afghan security forces and US aerial operations, including the “Mother of All Bombs” in April 2017, crippled ISIS-K. The US killing of Islamic leader Abu Bakr al-Baghdadi in October 2019 was a distant but significant blow. By 2020, ISKP’s estimated membership was 1,500 to 2,200. However, a new commander, Shahab al-Muhajir, energized the group with operations such as an attack on a prison in Jalalabad, freeing fighters, and an assassination attempt on Vice President Amrullah Saleh, leaving 10 dead. ISKP has sought further growth by assailing Taliban “weakness” and collusion with foreign powers in the Doha political talks.

“Al Qa’eda” and the Haqqani Network

Unsurprisingly, Western media and pundits often invoke the specter of “Al Qa’eda” as part of the Taliban takeover.

A UN report in June said Al Qa’eda members are active in 15 of 34 Afghan provinces; however, in both operational significance and political authority, the organization is a shell of its 2001 version. It was pushed into northwest Pakistan soon after 9-11, with Osama bin Laden finally killed by US special forces in 2011. Other senior leaders have been slain or captured. While bin Laden’s successor Ayman al-Zawahiri is thought to be in Afghanistan, he is muted and said to be in poor health.

In contrast, the Haqqani Network is at the heart of the Afghan contest for power. Hailing from southeast Afghanistan, Jalaluddin Haqqani established the group in the 1980s, soon receiving assistance from the Reagan Administration and Pakistani intelligence to fight Soviet forces.

After the Taliban rose to power in 1996, Haqqani accepted a Cabinet post as Minister of Tribal Affairs. The US-backed overthrow of the Taliban in 2001 forced the Network to regroup in Pakistan, but it soon pursued cross-border operations. It intersected with Al Qa’eda, both in ideological positioning and in training camps.

Today, Jalaluddin Haqqani’s son Sirajuddin leads the Network. The US has offered a reward of up to $10 million for his capture. In February 2020, as deputy leader of the Taliban, he wrote in The New York Times of the political talks:

We are committed to working with other parties in a consultative manner of genuine respect to agree on a new, inclusive political system in which the voice of every Afghan is reflected and where no Afghan feels excluded.

Sirajuddin has not yet appeared in Kabul. However, four days after the Taliban entered the capital, his younger brother Anas met former President Hamid Karzai; Dr. Abdallah Abdallah, the head of High Council for National Reconciliation, and long-time militia leader and former Prime Minister Gulbuddin Hekmatyar.

Where Now, The Enemy of My Enemy?

ISKP’s bombing last week was not just an attack on US forces. It was also a challenge to the Taliban, asking, “Where is your authority? Where is your security?”

Doing so, it reconfigured the Afghan mosaic, pushing Washington and other countries to recalculate their political and military approach. Joe Biden’s War on Terror response, “We will hunt you down and make you pay”, poured urgency on that recalculation.

The US response will be airstrikes over the border, from its al-Udeid base in Qatar and an aircraft carrier in the Arabian Sea. Within 36 hours of the Kabul airport bombing, the Pentagon announced the drone assassination of an ISKP operative.

But effective aerial operations still require local assets to identify and track targets. Those are likely in jeopardy, if they still exist, after the US ground withdrawal. Unlike 2001, when the CIA quickly established links with the Northern Alliance, Washington is unlikely to build up that capability with the “resistance” of the local leader Ahmad Massoud and former Vice President Saleh in the Panjshir Valley in northeast Afghanistan.

The US is already in contact with the Taliban, not just through the political talks but on military matters. Discussions before the Taliban entry into Kabul established protection of embassies as well as the evacuation zone at the airport. The day after ISKP’s attack, Gen. Kenneth Mckenzie, the head of US Central Command, said American forces would work with the Taliban to expand the security perimeter.

So will Biden, making ISKP the focus of his post-withdrawal Afghanistan policy, continue the cooperation with the Taliban — and thus the Haqqani Network and its “Most Wanted” leader Sirajuddin Haqqani?

How far could that go? Will the US unfreeze the assets of the Central Bank, and reverse its pressure on the IMF which led to the suspension of aid? Is this a path to diplomatic recognition of the Taliban, setting aside Biden’s general references to “human rights and democracy”? Will Haqqani no longer have a $10 million bounty on his head?

See also EA on India’s NDTV and UK’s talkRADIO: Will Biden Work with the Taliban?

Even before the Kabul bombing, Britain’s Chief of Staff Gen. Nick Carter offered a provocative clue. Carter, who is close to Pakistan’s military commanders, said the Taliban should be given a chance to govern. He described them as “country boys” adhering to a traditional Afghan tribal code: “It may be that this Taliban is a different Taliban to the one that people remember from the 1990s.”

The UK Government is divided over that statement and its implication. However, a marker has been laid.

It is unlikely that the maneuvering with the Taliban will be in public, even if they are now the enemy of the enemy. But watch the signals from Washington, London, and elsewhere carefully. If rhetoric about rights and security for Afghans is replaced with the slogans about security for Americans and Britons — if Afghans are replaced with the War on Terror — then the political ground may be prepared for the unlikeliest of bedfellows in an unending conflict.