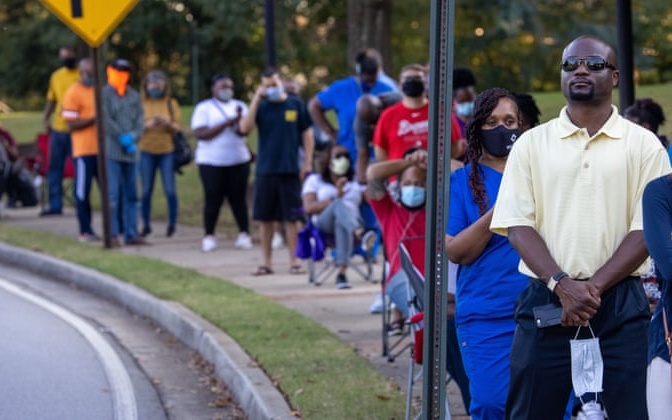 Georgians line up to vote early in US elections, October 2020

The filing outlines discrimination against Black voters with provisions “passed with a discriminatory purpose”.

The rights of all eligible citizens to vote are the central pillars of our democracy. They are the rights from which all other rights ultimately flow….

This lawsuit is the first of many steps we are taking to ensure that all eligible voters can cast a vote, that all lawful votes are counted and that every voter has access to accurate information.

Garland said the Department will also act against increased threats to election officials and poll workers, with a task force to investigate and prosecute cases.

The lawsuit is the first by the Federal Government against measures pursued by Republican-controlled state legislatures. In 2013, the Supreme Court overturned a provision of the Voting Rights Act of 1965 that empowered the Justice Department to stop states from passing laws which discriminate against voters.

Earlier this week all 50 Senate Republicans blocked any advance of the For The People Act for voting rights. The 50-50 outcome fell short of the 60 votes needed to end a GOP filibuster preventing further consideration of the measures for mail-in and absentee ballots, regulations of campaign finance, and an end to political gerrymandering of districts.

Republicans in Georgia pursued the restrictions after Joe Biden won the state in the November Presidential election, the first Democrat to triumph since 1992, and Democrats Raphael Warnock and Jon Ossoff took seats from Republican incumbents in January.

The bill, passed in late March, mandates more stringent voter verification requirements for absentee ballots, allows political officials to take over election boards, and limits ballot dropboxes. Any Georgian can make unlimited challenges to voter registrations. It is a misdemeanor crime to offer food and water to voters waiting in line to cast a ballot.

Referring to post-Civil War measures to prevent Blacks from voting, Biden said, “This is Jim Crow in the 21st century, it must end.”

However, Florida has followed with its own restrictions, and a bill in Texas was only blocked by a Democratic walkout in the State Senate.

The DoJ lawsuit announced today is legally and constitutionally dead wrong. Their false and baseless accusations are quite honestly disgusting.

Kemp, who faces a primary with a possible Trumpist candidate next spring, declared, “They are coming for you next. They’re coming for your state, your ballgame, your election laws, your business and your way of life.”

But the head of the Justice Department’s civil rights division, Kristen Clarke, explained, “These legislative actions occurred at a time when the Black population in Georgia continues to steadily increase, and after a historic election that saw record voter turnout across the state, particularly for absentee voting, which Black voters are now more likely to use than white voters.”