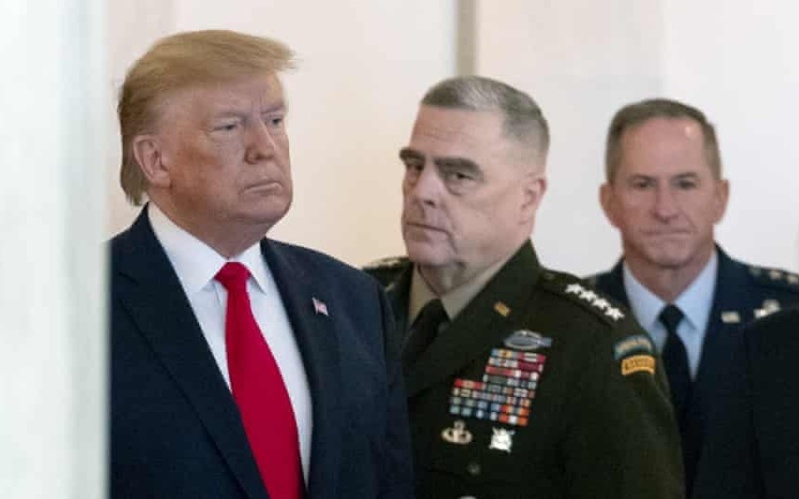 In the final weeks of Donald Trump’s Presidency, Gen. Mark Milley — the Chairman of the Joints Chief of Staff — warned of Trump’s attempt to hold power after losing the November 2020 election.

Milley compared Trump’s quest to 1930s Germany, matching Trumpian rhetoric with that of Adolf Hitler. He asked confidants if Trump might pursue a “Reichstag moment” to justify a coup.

The phrase refers to Hitler’s use of a fire at the Reichstag, the German Parliament, to justify rule by emergency decree in 1933.

Amid Trump’s disinformation and lies about the election, Milley described his “stomach-churning” feeling. Two days after the vote, after a security briefing about the pro-Trump “Million MAGA March”, Milley said he feared an American equivalent of Hitler’s “brownshirts in the streets”.

See also Trump: “Hitler Did A Lot of Good Things”

Late that same evening, Milley was further disconcerted by a friend who called about the Trump camp’s effort to “overturn the government”: “You are one of the few guys who are standing between us and some really bad stuff.”

Milley called Gen. H.R. McMaster, who was pushed out as National Security Advisor by Trump in April 2018. He asked, “What the fuck am I dealing with?”

Milley began informal planning with other military leaders to block any Trump order seen as dangerous of illegal use of the military. He told deputies, “They may try, but they’re not going to fucking succeed.”

We’re going to have a peaceful transfer of power. We’re going to land this plane safely. This is America. It’s strong. The institutions are bending, but it won’t break.

When rumors spread that Trump would fire CIA Director Gina Haspel, putting in his loyalist Kash Patel, Meadows asked White House Chief of Staff Mark Meadows at the annual Army-Navy football game, “What the hell is going on here? What are you guys doing?”

The 1930s Germany comparison recurred after the January 6 attack on the US Capitol, incited by a Trump speech. Milley told military and law enforcement leaders, during preparations for President Joe Biden’s inauguration:

House Speaker Nancy Pelosi asked for a guarantee that Trump could not start a war with a nuclear strike: “This guy’s crazy. He’s dangerous. He’s a maniac.”

The general assured, “Ma’am, I guarantee you that we have checks and balances in the system.”