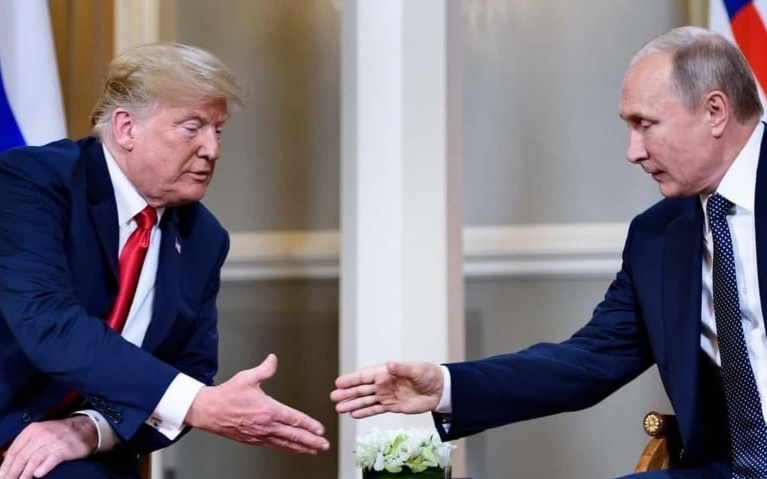 Vladimir Putin ordered covert support of a “mentally unstable” Donald Trump in the 2016 US Presidential election, according to “leaked Kremlin documents” seen by The Guardian newspaper.

The documents indicate that Putin issued the directive at a closed-door session of the National Security Council on January 22, 2016. Senior officials agreed a Trump Presidency would advance Russia’s strategic objectives, fostering “social turmoil” in the US and weakening the White House’s position.

Russia’s State Security and military intelligence agencies were ordered to find methods with “all possible force” to seek a Trump triumph: “[This] will definitely lead to the destabilisation of the US’s socio-political system.”

It was already known that Russian English-language outlets and social media allies were promoting Trump from August 2015, just over a month after he declared his candidacy. The approach was formally authorized the following February, when Russian officials circulated an outline of themes for content on social media accounts. The Kremlin instructed State outlets, including the international platforms Russia Today and Sputnik, to report positively on Trump’s campaign. Dimitri Skorobutov, a journalist at Russia State TV, recalled:

Me and my colleagues, we were given a clear instruction: to show Donald Trump in a positive way, and his opponent, Hillary Clinton, in a negative way….

Putin’s office commissioned a strategy propaganda from the Russian Institute for Strategic Studies. The recommendations, circulated in June, set out the expansion of initiatives on social media and State outlets to encourage a vote for a US President who would take a softer line towards Moscow than that of the Obama Administration.

Working in a four-story office block in a St Petersburg suburb, at least 90 staff of the Internet Research Agency were tasked with influencing the US Presidential election, including through widespread disinformation.

The “Most Promising Candidate” for Moscow

The purported documents add detail to the Kremlin’s directive. A report for the January 22 meeting, classified as secret, says Trump is the “most promising candidate” for Russian interests. He is described as an “impulsive, mentally unstable and unbalanced individual who suffers from an inferiority complex”.

The report also affirms to confirm other documents, including the Steele Dossier on Trump-Russia links, that Russian agencies had compromising material on Trump from his visits to Russia.

An appendix with the details was not obtained by The Guardian. However, Trump has reportedly been vulnerable because of his efforts for business in Russia, including a Moscow Trump Tower, and his pursuit of deals and Putin’s favor through the 2013 Miss Universe pageant — with the rights to the event, Trump staged it in Moscow, where he conferred with Russian oligarchs about business ventures. The claims of compromising material have included Trump’s consorting with prostitutes in a hotel room surveilled by Russian intelligence agencies.

The National Security Council discussed a three-page executive summary of conclusions and recommendations from Vladimir Symonenko, the senior official in charge of the Kremlin’s expert department. The summary saw US vulnerabilities such as a “deepening political gulf between left and right”, the “media-information” space, and hostility to the Administration of President Barack Obama.

Recommendations included the insertion of “media viruses” into US public life, which could become self-sustaining and self-replicating to shift public opinion.

A Commission for the US Election

After the meeting, according to the documents, Putin’s decree established a secret interdepartmental commission, including Defense Minister Sergey Shoigu; Mikhail Fradkov, the head of the SVR foreign intelligence service; and Alexander Bortnikov, the chief of the FSB State intelligence agency.

The chiefs were ordered to come back with plans by February 1.

Weeks later, hackers from the Russian military intelligence service GRU hacked the computers of the Democratic National Committee and of John Podesta, chief of staff for the Democratic Presidential nominee Hillary Clinton. The operations led to the circulation of DNC and Clinton e-mails, through WikiLeaks, feeding Trump’s campaign claims and damaging his opponent.

While there is no evidence that the Trump camp ever received any documents from the Russians, the e-mails were published by WikiLeaks in July and in October, before the November 8 vote.

Are The Documents Genuine?

The Guardian published a few paragraphs from the documents which it received. Andrei Soldatov, one of the world’s leading authorities on Russian cyber-operations and disinformation, assessed that they “reflect reality”.

It’s consistent with the procedures of the security services and the security council. Decisions are always made like that, with advisers providing information to the president and a chain of command.

The Kremlin micromanages most of these operations. Putin has made it clear to his spies since at least 2015 that nothing can be done independently from him. There is no room for independent action.

Citing his own sources, Soldatov said Putin decided to release the hacked DNC e-mails after a Natonal Security Council meeting in April 2016.

Other analysts were wary, with some cautioning that the leak could be a “sting”: Russian officials planted falsified documents, later exposing them as forgeries to discredit all reporting of the Trump-Russia affair.

Mark Galeotti tweeted, “At the moment I’m honestly on the fence about the latest Guardian leak…[but] we really need to dig into the text (and preferably see more of it) before taking anything so significant – especially of coming from unknown sources – at face value.”

Chris Krebs, the Director of the Cybersecurity and Infrastructure Security Agency in the US Department of Homeland Security from November 2018 to November 2020, summarized: “This is far too convenient & reeks of #disinfo operation. It could all be individually or collectively true and at the same time planted & fake.”

Long-time supporters of the Russian line, such as activists Glenn Greenwald and Aaron Maté, did not address the content of the purported documents or the context of Russian activities in 2016. Instead, they targeted Luke Harding while ignoring his Guardian colleagues Julian Borger and Dan Sabbagh.

The activists see Harding, the author of the book Collusion on Trump-Russia ties, as the weak link: his 2018 article claiming meetings between Trump campaign manager Paul Manafort and WikiLeaks founder Julian Assange, in the Ecuadorean Embassy in London where Assange was avoiding criminal prosecution, did not hold up to scrutiny.

Trump spokesperson Liz Harrington issued a statement on his behalf: “This is disgusting. It’s fake news, just like RUSSIA, RUSSIA, RUSSIA was fake news. It’s just the Radical Left crazies doing whatever they can to demean everybody on the right.”