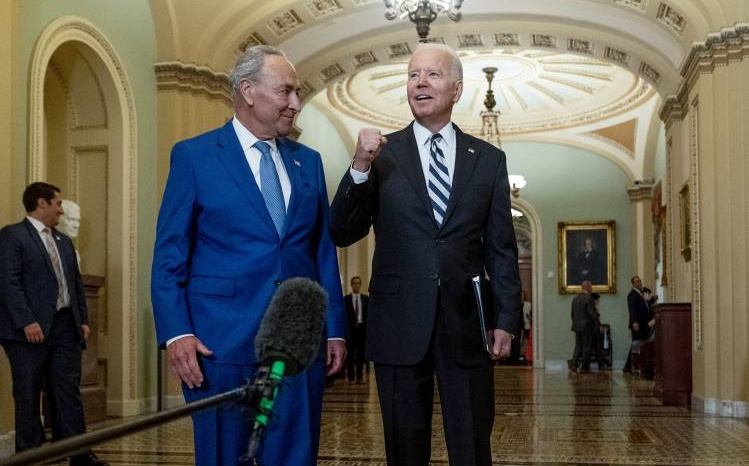 President Joe Biden and Congressional Democrats present a $3.5 trillion budget blueprint, including the expansion of health care, education, and social and environmental programs.

The package goes beyond Biden’s initial Plans. Medicate is expanded to cover dental, vision, and hearing benefits. The Senate Finance Committee will decide whether to include a measure, promoted by Sen. Bernie Sanders of Vermont, that lowering the Medicare eligibility age to 60.

The budget include a Civilian Climate Corps, and creates an effective tax on imports from countries with high levels of greenhouse gas emissions, such as China.

Biden and the Democratic legislators had a closed-door lunch on Tuesday to discuss the presentation of the plan. The Democrats have a narrow majority in the House, but the Senate is divided 50-50, with Vice President Kamala Harris as a deciding vote.

Sen. Sanders, the chair of the Budget Committee, said after the lunch:

In some cases, it doesn’t provide all the funding that I would like to do right now. But given the fact that we have 50 members, and that compromises have got to be made, I think this is a very, very significant step forward.

If you’re asking me at the end of the day, do I think we’re going to pass this? I do.

Some Democratic Senators held back from endorsement at this point. Sen. John Tester of Montana said he will vote for the full budget outline, but before final passage, “We’ve got to get more meat on the bones for me. I’ve got to get more information on what’s in it.”

Sen. Joe Manchin of West Virginia said he had concerns about some of the languague in the climate change provisions. Sen. Kyrsten Sinema of Arizona withheld comment.

But Sen. Elizabeth Warren of Massachusetts summarized, “The plan is a strong first step.”