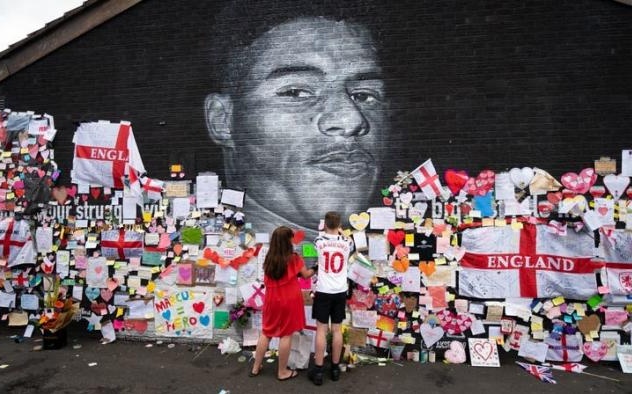 The mural of England footballer Marcus Rashford in his native town of Withington, with tributes covering up vandalism after the Euro 2020 final, July 2021

I have to admit: I was conflicted throughout England’s run to the final of Euro 2020.

As a callow 18-year-old American at the University of Leeds, I was immersed in the UK through football. I was in the stands at Elland Road for every home game. England flag draped around my shoulders, I watched Bryan Robson score the fastest opening goal — 31 seconds v. France — in World Cup history.

Now, almost 40 years later, I saw that excitement in the eyes of my two adult children. Maybe they would have a moment to surpass the legend of that sole England triumph in the 1966 World Cup.

But at the same time, I knew that UK — or maybe “England” — Prime Minister Boris Johnson would exploit the achievements of those young men on the pitch.

Boris was always the “sports and circuses” politician. Already plotting his path to 10 Downing Street, he manically waved the Olympic banner at the closing ceremony in Beijing in 2008. He blustered about English superiority with the creation of “wiff-waff”, also known as ping-pong.

Thirteen years later, he had occupied Number 10. But his bungling of the Coronavirus pandemic had contributed to the deaths of almost 130,000 people in the UK. His Health Minister, Matt Hancock, was gone not for ineptitude but for an extra-marital clinch with his aide in his Ministry office. There had been no Brexit boost, only the steady erosion of trade and the UK’s financial, political, and diplomatic position.

So Boris posed in front of the large-screen TV as England’s #1 cheerleader. He confronted the camera in front of Number 10 holding up an English flag, albeit one which looked like it had shrunk in the wash. He promised a Bank Holiday if the boys brought football home by winning the final against Italy.

Boris was trying to sweep away Brexit clouds. The drag on a post-pandemic recovery was clear in May’s GDP growth of only 0.8%, a sharper-than-expected slowdown in sectors such as construction and automobile manufacturing.

The Government’s Brexit minister David Frost and Northern Ireland Secretary Brandon Lewis were repeating the threat to renege on the Northern Ireland Protocol and thus the agreement with the European Union.

Having fired a broadside in English and Irish media — “we will of course have to consider all our options” — the two men repeated the threat to a committee of the Northern Ireland Assembly on July 9.

Frost berated Johnson’s predecessor Theresa May and her ministers. He framed the Protocol not as an agreement but as “the imposition of another party’s law”.

Days earlier, the EU had bailed the UK out of its crisis in trade and supplies between Northern Ireland and Great Britain, agreed to yet another extension — to October — waiving implementation of customs checks for health and safety. But Frost brushed away the step: he declared that the UK Government had presented a dozen papers with detailed proposals for improvements to the Protocol, but had received no response.

Few English media outlets noticed. After all, there was a football final at Wembley to win.

Hypocrisy and the Flag

It didn’t work out that way. And far from taking his own victory lap, Boris Johnson was taking shelter from the calling out of his hypocrisy.

The English flag at Wembley was accompanied by supporters breaking into the stadium, dancing drunk and naked, and even putting lit flares in their backsides. Having brought a £30,000 fine upon the English Football Association with their booing of the Danish national anthem, they did the same to the Italians.

Following their loss on penalties to Italy, the team and manager — hours earlier, rightfully hailed as an exemplar for the nation — were torn down on Twitter by racist taunts, particularly of Marcus Rashford, Bukayo Saka, and Jaden Sancho. A mural honouring Rashford for his social activism, in his hometown of Withington, was vandalized.

Johnson tried to claim some moral ground, “This England team deserve to be lauded as heroes, not racially abused on social media.” Home Secretary Priti Patel said the abuse was “disgusting”.

But some observers were old enough to remember that the Prime Minister had once joshed about “watermelon smiles” and “piccaninnies”. They recalled that in April, the Government had produced a report on racism which was littered with mistakes and distortions as it dismissed any institutional or systemic issues, with UN experts criticizing the “reprehensible” outcome.

They remembered that Patel has explored sending asylum seekers to the South Atlantic and now to an “offshore hub” in Africa. And they recalled that last month, Patel said fans had a right to boo players for taking a knee to protest racism, sneering that the footballers were practicing “gesture politics”. 10 Downing Street also refused for days to call out the booing, echoing Patel’s derision, “On taking the knee, specifically, the Prime Minister is more focused on action rather than gestures.”

Tyrone Mings, a member of the England team, called out the hypocritical posturing:

You don’t get to stoke the fire at the beginning of the tournament by labelling our anti-racism message as ‘Gesture Politics’ & then pretend to be disgusted when the very thing we’re campaigning against, happens. https://t.co/fdTKHsxTB2

Of course, that will have no effect on Johnson, even as he declares his belief that the footballers “represent the very best of our country”. Having stoke the mythical “culture wars”, he will deny that he or his ministers ever condoned the booing. He will declare that social media racists may be banned from matches. He will divert attention to platforms such as Facebook, Twitter, and Instagram, with the non-existent threat that can be fined 10% of their global revenues for any racist messages.

Boris Johnson: We have never condoned the booing of players when they take the knee

The man who falsely claimed that there was no “customs line” down the Irish Sea in the Brexit agreement and whose ministers are insisting that it is everyone’s else fault — he’ll use the same tactics to avoid responsibility over past positions on race.

So, in the absence of a responsible Government, is there anywhere to turn?

During the semi-final with Denmark, my friend Hasan Patel posted a video on Twitter:

British Muslim students from an Islamic seminary watching the #ENG game when @HKane scored. This is the #eng we are part from which some people lead us to believe isn’t possible, it is and the racists can do one. @Sathnam @mrjamesob you’ll appreciate it. pic.twitter.com/cKr4SJ0E5Y

The clip, viewed more than 1.1 million times, became a marker of a diverse, enthusiastic England cheering a diverse, promising team. Muslim women in the West Midlands — the same area where Tory MP Lee Anderson said he would boycott watching England because of Take The Knee — spoke of their support:

Over two thirds of the current England squad is made up of players with migrant backgrounds. This is important to who we are as a nation. Here, we’re mostly Muslim women from Bangladeshi, Indian and Pakistani backgrounds but sport has brought us together with women of many languages, faiths and ethnicities.

Immigration and diversity is good for this country.

Thousands of miles away, The New York Times took notice of “a new vision of Englishness, putting the lie to those who would stir culture wars”.

Defeat in the final, no more than Johnson’s poses or the fans who besmirched the events, could not erase that. Instead, manager Gareth Southgate’s consoling embrace of 19-year-old Bukayo Saka, who missed the decisive penalty (as Southgate did in the 1996 Euro semi-final) was the icon of decency.

Former player and current commentator Gary Neville made a telling contrast between Southgate and Johnson as the issue of racism flared: “You can be a leader and be a gentlemen. You can be ruthless and have empathy and compassion.”

In Withington, they gathered not only to cover up the vandalism of Marcus Rashford’s mural, but to add to it.

This is the scene at the Marcus Rashford mural in Withington this morning. Messages of love have covered up racist graffiti daubed on the portrait.
Rashford says the community's support has left him 'on the verge of tears.' pic.twitter.com/txcGtZKQ83

This will not be enough to cleanse the stench of racism, or of the hypocrisy fostering it. It may not save the Northern Ireland Protocol. It will not prevent the economic damage of a Brexit in which England’s Government prefers fantasy and diversion to reality and law.

But as in football — the World Cup in Qatar is only 16 months away — the match is not over.