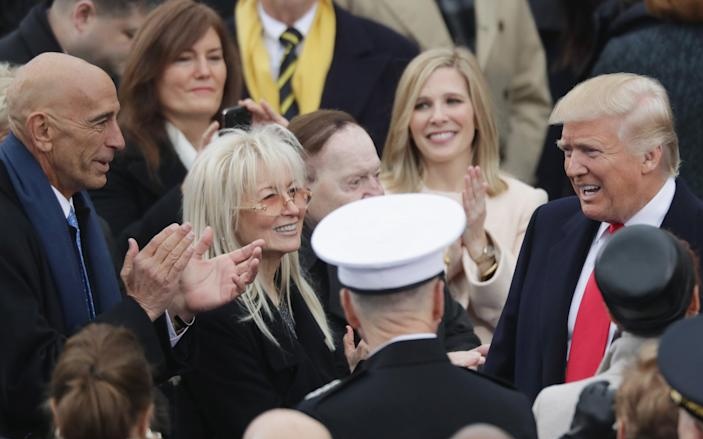 Thomas Barrack — a close friend and top fundraiser for Donald Trump and chair of his 2017 inaugural committee — is arrested on federal charges of failing to register as a foreign lobbyist, obstruction of justice, and lying to investigators.

Barrack was indicted on Tuesday on seven counts, using access to Trump for the foreign policy of the United Arab Emirates and repeatedly misleading federal agents in a June 2019 interview.

The fundraiser invited senior Emirati officials to give him a “wish list” of actions by the Trump Administration within the first 100 days, first six months, first year, and first term.

Amid the blockade of Qatar by the UAE and Saudi Arabia in 2017 — a crisis that threatened the status of the US military base in Qatar, one of the largest in the world — Barrack pressed the Trump administration not to hold a summit with the Qataris.

They claimed that Barrack, a Trump friend since the 1980s, sought to be appointed as a Middle East or Ambassador to the UAE. The indictment that his actions were pursued in close cooperation with Crown Prince Mohammed bin Zayed, the de facto UAE ruler.

In the three years after Trump became the Republican nominee for President in July 2016, Barrack’s real estate and private equity firm Colony Capital received about $1.5 billion from the UAE or Saudi Arabia.

Twelve days after Trump was inaugurated, Barrack e-mailed White House chief strategist Steve Bannon with “an elegant thought” about how US companies could help Saudi Arabia build nuclear power plants. The plan would be “backed immediately” by the Saudis and would “balance the current noise” caused by the Trump Administration’s Muslim Ban on entry into the US.

Barrack was instrumental in connecting Paul Manafort, who would join Trump’s campaign in March 2016 and rise to become its manager. Manafort left in August 2016, amid revelations about multi-million payments for consultancy, including for pro-Russian Ukrainian politicians and businessmen. He was later sentenced to 7 1/2 years in prison, but pardoned by Trump in December 2020.

A History of UAE Lobbying of Trump

Barrack’s activity and indictment is within the context of UAE links with Donald Trump’s advisors, going back to the 2016 campaign.

In May 2016, Barrack sent a draft Trump speech on energy policy to Emirati businessman Rashid al-Malik Alshahhi, who was indicted in absentia on Tuesday.

Alshahhi contacted the UAE leadership, who revised the draft to include praise of Crown Prince Mohammad bin Zayed.

The Lebanese-American businessman later came under scrutiny in Special Counsel Robert Mueller’s investigation over a $2.5 million payment to Trump fundraiser Elliott Broidy, seeking to harden the Administration’s policy against Qatar.

Nader pled guilty to child sex and pornography charges in January 2020. Broidy pleaded guilty in October 2020 to conspiring to act as an unregistered foreign agent.

In January 2017, the UAE arranged a meeting in the Seychelles between Erik Prince met Kirill Dmitriev, the head of the Russian Direct Investment Fund and an ally of Vladimir Putin.