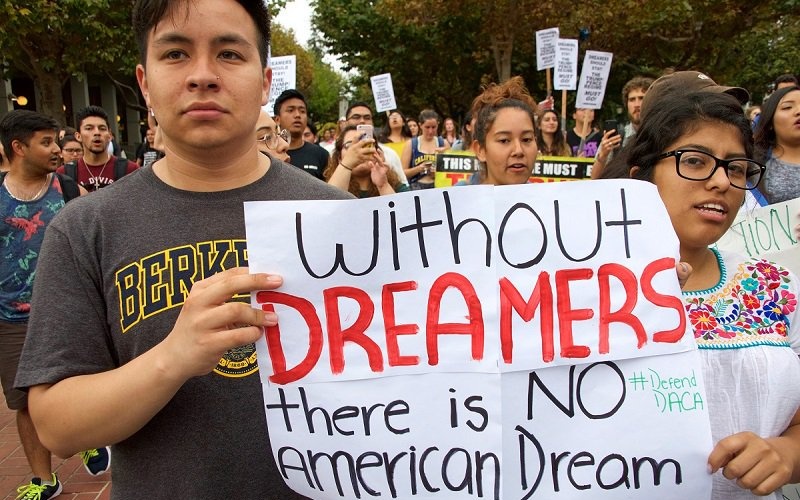 A federal judge in Texas rules that the Dreamers program, protecting about 650,000 young people from deportation, is unlawful.

Judge, Andrew Hanen of the US District Court in Houston said President Barack Obama exceeded his authority with an executive order, Deferred Action for Childhood Arrivals, in 2012.

Hanen, appointed by President George W. Bush, said current Dreamers are not affected, and cannot be subject to deportation or criminal action. New applications may be accepted but temporarily cannot be approved by the Department of Homeland Security.

The Department faces a backlog of new and renewal applications because of the Coronavirus pandemic.

“Doubt and Anxiety for the Foreseeable Future”

The Dreamers came to the US as children of undocumented immigrants. Many of them are now in employment, the military, or higher education.

The young people faced the prospect of deportation for years by a Trump Administration, which threatened to end DACA. In June 2020, the Supreme Court ruled that the Administration’s decision to terminate the program was “arbitrary and capricious.” In December, a federal judge in New York ordered Trump officials to fully reinstate the program, including the acceptance of new applications.

Democrats sought legislation for a path to Dreamers citizenship, but were blocked by Republican objections. On his first day as President, Joe Biden issued an executive order to bolster DACA. He promised to pursue the citizenship procedure, but the Administration has not yet produced the legislation for the Dreamers or for up to 10 million immigrants to live in the US legally

Hanen maintained that DACA violated the Administrative Procedure Act, in part because there was no comment from the general public: “DHS failed to engage in the statutorily mandated process, so DACA never gained status as a legally binding policy that could impose duties or obligations.”

The judge said the power to regulate immigration was reserved for Congress: “The executive branch cannot just enact its own legislative policy when it disagrees with Congress’s choice to reject proposed legislation.”

Texas officials led the effort to terminate the program. They were joined by Alabama, Arkansas, Kansas, Louisiana, Mississippi, Nebraska, South Carolina, and West Virginia. The officials complained that they had to pay for education, health care, and other benefits for immigrants.

Michael Kagan, director of the immigration clinic at the University of Nevada, Las Vegas, explained:

Unless Congress acts for the Dreamers, DACA is likely to be entangled in litigation and legal doubt for a while. And there’s no reason to think Congress will act quickly or easily.

Unfortunately, Dreamers may have to live with some level of doubt and anxiety for the foreseeable future.

Sarahi Magallanez, a DACA applicant and psychology student in Los Angeles, reacted to the news: “Oh, no. No. No. This is just really bad.”

She added, “I was banking on this to start my career. Now there is a chance I can’t. DACA is not safe, and we are at the mercy of whoever is in power.”