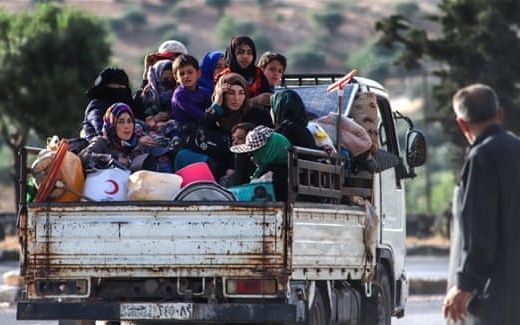 The UN Security Council has agreed an extension of up to 12 months for the sole border crossing for aid into northern Syria.

The initial extension of the Bab al-Hawa crossing from Turkey is for six months. UN Secretary General António Guterres will then report on the status of those receiving the aid, estimated at 1.4 million civilians, and request another six months.

US Ambassador Linda Thomas-Greenfield said after Friday morning’s vote, “Parents can sleep tonight knowing that for the next 12 months their children will be fed. The humanitarian agreement we’ve reached here will literally save lives.”

Russian Ambassador Vassily Nebenzia portrayed the outcome as a success for US-Russian cooperation, following last month’s meeting between President Joe Biden and Russian counterpart Vladimir Putin: “We hope that it might be a turning point that is indeed in line with what Putin and Biden discussed in Geneva. It demonstrates that we can cooperate when there is a need and when there is a will as well.”

But activists have noted that the short-term resolution is inadequate.

[6] An alternative to UNSC cross border resolutions is very urgent. Aid shouldn’t be politicized his way. Furthermore, humanitarian actors should focus more on localization of aid, small grants, livelihood, and empowering local economies to reduce the dependency on aid.

Russia has signalled that it will accept a six-month extension of the last border crossing for aid into northern Syria.

Moscow has threatened for weeks to veto the extension of the Bab al-Hawa crossing from Turkey into Idlib Province in opposition-held northwest Syria. Russia’s vetoes in the Security Council have already closed three other crossings, two from Turkey into the northwest and one from Iraq into the Kurdish-controlled northeast.

Moscow appears to have stepped back in the face of a resolution, drafted by Ireland and Norway, for a 12-month extension of Bab al-Hawa and the reopening of the al-Yaroubieh crossing from Iraq.

UN Secretary-General Antonio Guterres has appealed to the Security Council for a one-year renewal, warning of the devastation for millions of Syrians of an aid cutoff.

The Kremlin’s envoy for Syria, Alexander Lavrentyev, told reporters on Wednesday, “We insist on wrapping up this mechanism” as it was no longer useful.

Lavrentyev did not explain how the Bab al-Hawa crossing from Turkey into northwest Syria, through which the UN supports about 1.4 million civilians, was useless.

The envoy said the provision for four border crossings, adopted in 2014, was “a temporary measure” when the Assad regime did not control checkpoints and most of its state borders.

Russia has said that the regime can provide any necessary assistance to the opposition-held northwest and Kurdish-controlled northeast — even through the regime has pursued sieges and blocked any assistance in an attempt to regain “every inch” of the country.

Moscow’s vetoes in the UN Security Council have already closed the other three crossings. Russian officials say they will also block the restoration of the al-Yaroubieh crossing from Iraq into northeast Syria.

The mandate for the Bab al-Hawa crossing expires on July 10.

Lavrentyev’s statement comes less than a week after he met Bashar al-Assad in Damascus.

Rescuers and humanitarian workers form a human “lifeline” to highlight the necessity of the Bab al-Hawa crossing, from Turkey into Idlib Province in northwest Syria, for millions of civilians.

Humanitarian workers in northwest #Syria formed a massive human chain today, calling for the Security Council to renew its authorization for cross-border aid

I hope the Security Council will listen to the voices of these Syrian humanitarian workers
pic.twitter.com/y7wgsKTFih

Russia will veto any UN resolution for aid to be restored from Iraq into Kurdish-controlled northeast Syria.

Moscow’s UN Ambassador Vassily Nebenzia said delivery of assistance through the al-Yaroubieh crossing is “a non-starter.” He refused to say if Russia will veto the extenson of the Bab al-Hawa crossing from Turkey into northwest Syria.

The draft resolution, drafted by Norway and Ireland and circulated on Friday, renews the Bab al-Hawa crossing from Turkey into northwest Syria. The current mandate for the crossing expires on July 10, threatening assistance to millions in the opposition-held area.

The resolution reopens the al-Yaroubieh crossing from Iraq into Kurdish-controlled northeast Syria, one of three closed by Russian vetoes in the Security Council last year.

The mandates for both crossings would be for a year, compared with the current six months for Bab al-Hawa.

The Norway-Ireland resolution presents the guidance of UN staff, including head of aid Mark Lowcock, that the crossings are a vital “lifeline”: “The devastating humanitarian situation in Syria continues to constitute a threat to peace and security in the region.”

But Moscow and the Assad regime have been beating a propaganda drum throughout this month, including that Russia will use its veto to ensure that all aid crossings are closed for the foreseeable future.

The Security Council approved the four border crossings in 2014.

“Without Urgent Action, Millions Will Be Cut Off”

US Ambassador Linda Thomas-Greenfield, who visited Bab al-Hawa and spoke with local officials and NGOs in early June, said the resolution “falls short” of the three crossings which are needed. She called for the restoration of the Bab al-Salam crossing from Turkey to northwest Syria, closed in July 2020 by the Russian veto.

Thomas-Greenfield said, “Millions of Syrians are struggling, and without urgent action, millions more will be cut off from food, clean water, medicine and COVID-1 vaccines. The situation is devastating and will only get worse if we don’t act.”

David Miliband, head of the International Rescue Committee, also called for the opening of the Bab al-Salam crossing as “a direct gateway” from Turkey to northern Aleppo Province, where 800,000 displaced people live.

In its latest propaganda blast, Russia’s State outlet RT carries the words of the Assad regime’s Foreign Minister Faisal al-Mekdad, with the unsupported claim that Bab al-Hawa is used by the US to “supply arms to terrorists under the pretense of delivering aid”.

Russian Foreign Minister Sergey Lavrov has demanded that all aid be provided by Damascus, despite the Assad regime’s sieges, blocking of assistance, and theft of supplies — all enabled by Russia — throughout the Syrian conflict.

Turkish Ambassador Feridun Sinirlioğlu told the Security Council, “I remind you that one of the reasons leading the Council to adopt Resolution 2165 was the consistent obstruction by the regime of critical humanitarian supplies in many parts of the country.”