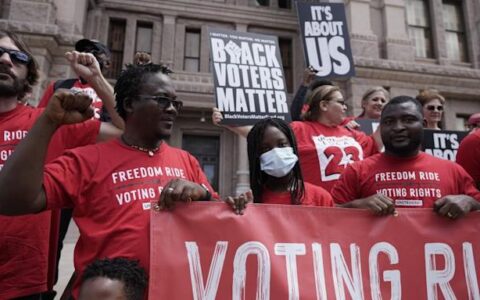 Texas Democratic legislators travel to Washington, both to prevent the passage of restrictions on voting rights and to support national protections.

The journey prevents Texas Republicans from attaining a quorum and ramming through the restrictions in special session which ends in August.

State Representative Trey Martinez Fischer, who organized the trip, said, “We have to decide if we are going to stand for democracy. We want the nation to join us and we want the US Senate to hear us and act.”

GOP State Representative Briscoe Cain, who chairs the House Elections Committee, insisted, “It’s just delaying the inevitable….We will eventually get it done, this special or another.”

In May, a late-night walkout by Democrats prevented completion of the Texas legislation. Gov. Greg Abbott, a Trump supporter, pledged to push through the bill in a special session.

In the US Senate, Republicans are blocking a final vote on the For The People Act through an indefinite filibuster. On June 22, all GOP Senators voted to continue the filibuster in a 50-50 outcome, short of the 60 Senators needed to end the blockade.

On Tuesday, President Joe Biden speaks in Philadelphia about the measures. The Texas Democrats will hold a news conference at 10 a.m. in Washington.

“I applaud them standing for the rights of all Americans and all Texans to express their voice through their vote unencumbered,” Vice President Kamala Harris said in Detroit on Monday.