Biden Defends Afghanistan Withdrawal: “We Did Not Go to Nation-Build” 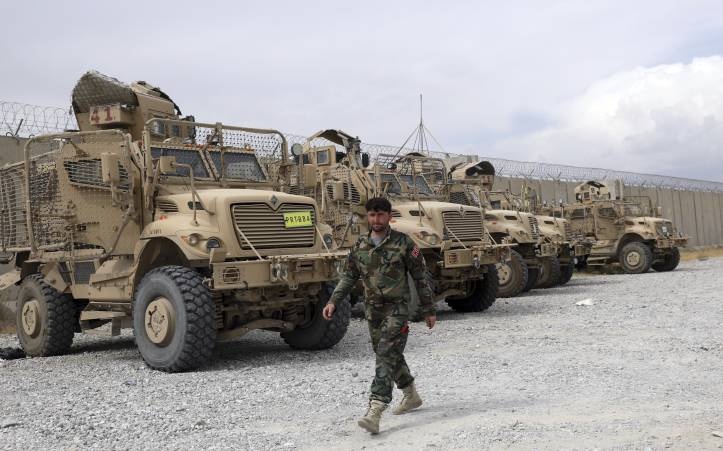 An Afghan army soldier walks past vehlicles left by the US military at the Bagram airbase, north of July 5, 2021 (Rahmat Gul/AP)

Biden spoke on Thursday as almost all personnel have left, following his announcement on April 14 of a departure by September 11. Since that statement, the Taliban have made further advances across the country, capturing Afghan security forces and forcing many hundreds into neighboring countries.

But Biden reiterated that the US will formally end its military mission by August 31.

Let me ask those who want us to stay: How many more? How many thousands more American daughters and sons are you willing to risk? And how long would you have them stay?

How Is US Military Leaving Afghanistan? Very Quietly.

The President said little about the fate of Afghans, with the Taliban holding more than half of the country after they were forced out of the capital Kabul by the US intervention in 2001. He showed irritation as reporters asked, “Do you trust the Taliban?” — “It’s a silly question” — and suggested that there would be a flight like that from Saigon in 1975, when North Vietnamese forces completed their takeover of South Vietnamese.

We did not go to Afghanistan to nation-build. And it’s the right and the responsibility of Afghan people alone to decide their future and how they want to run their country.

Biden maintained that the US has empowered the Afghan police and military to secure the future of the people: “The mission hasn’t failed — yet.”

Still, he gave Afghans a promise, if the situation is not tenable, that there is “a home for you in the United States, if you so choose. We will stand with you, just as you stood with us.”

Pentagon spokesman John Kirby said the military is considering the relocation of Afghan interpreters and their families in US territories, American military installations outside the US, and in other countries.

Biden’s decision continues his long-time opposition to a substantial US military presence in Afghanistan. In 2009, as Vice President under the new President Barack Obama, he argued for a minimal force. But Obama decided at the end of the year to triple the US military deployment.

We went for two reasons. One, to bring Osama bin Ladin to the gates of hell, as I said at the time. The second reason was to eliminate Al-Qaeda’s capacity to deal with more attacks on the United States from that territory. We accomplished both of those objectives, period. That’s what I believe from the beginning, why we should be and why we should have gone to Afghanistan. That job had been over for some time.

The Taliban have said they may present a proposal, as early as next month, to the Afghan Government for a political resolution. However, most analysts expect the group to continue attacks and the seizure of territory.

On Thursday, the Taliban took control of a crossing on the border with Iran to the west.

As the US leaves, Tehran is stepping up its involvement in an attempt to ensure its security. Iranian Foreign Minister Mohammad Javad Zarif has hosted two days of talks with Afghan Government and Taliban officials this week.

Second day of intra-Afghan talks in Tehran with #Iran FM @JZarif attending the session. The talks has now ended. FM Zarif said “Iran is always ready to facilitate the talks in any way you wish”. pic.twitter.com/yEo6TcJDvz

NATO and other coalition countries have also said they will be withdrawing military personnel by September. UK Prime Minister Boris Johnson announced the end of the British mission yesterday.

Biden held fast to his decision on Thursday:

Just one more year of fighting in Afghanistan is not a solution, but a recipe for being there indefinitely.