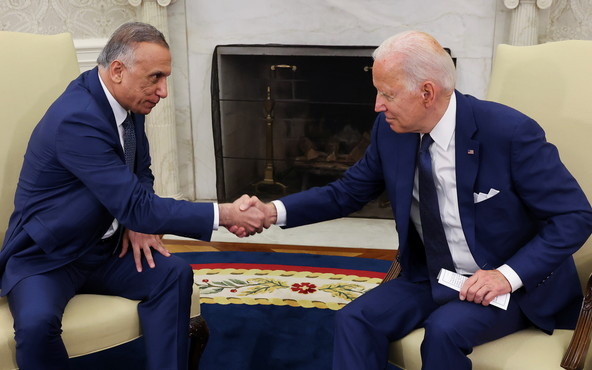 Almost 11 years after President Barack Obama announced the end of the US combat mission in Iraq, President Joe Biden has repeated the declaration.

The measure is largely symbolic. After Obama’s announcement, the US completed a Status of Forces Agreement with Iraq in December 2010, altering the American military’s presence to an advisory role. There are about 2,500 US personnel in the country.

Biden essentially restated the long-standing US position, while presenting it as a major development: “Our role in Iraq will be…to be available, to continue to train, to assist, to help and to deal with ISIS as it arises, but we’re not going to be, by the end of the year, in a combat mission.

However, Monday’s event is PR for both Biden and Kadhimi.

The US Administration is completing the more significant withdrawal of American military personnel from Afghanistan after an involvement of almost 20 years.

See also EA on Pat Kenny Show: As US Withdraws, What Is Next for Afghanistan’s People?

In Iraq, Washington is under military and political pressure from neighboring Iran. Iranian-backed militias continue rocket and drone attacks on Iraqi bases with US personnel, despite the January 2020 US assassination of Maj. Gen. Qassem Soleimani, the commander of the Quds Force and Tehran’s primary operative in Iraq.

Amid economic crisis and ongoing talks about the 2015 nuclear agreement, Iran’s leadership is hoping to celebrate “victory” with the departure of US personnel from Iraq as well as Afghanistan.

A “senior administration official” pointed to an ongoing US presence while avoiding the priority issues around Iraq, Iran, and the region, “Nobody is going to declare mission accomplished. The goal is the enduring defeat of ISIS….By the end of the year we think we’ll be in a good place to really formally move into an advisory and capacity-building role.”

The Kadhimi Government is mired in the economic problems, corruption, and political instability which have marked Iraq since the 2003 war that toppled Saddam Hussein. The issues have been compounded recently bya series of hospital fires, killing dozens of people, and a rise in Coronavirus cases.

The Prime Minister is hoping for a boost for Iraq’s elections in October. He has positioned himself as a leader with effective relations with both Washington and Tehran, while trying to curb both Iranian-backed Iraqi militia and US airstrikes along the Iraq-Syria border.

The Biden Administration is emphasizing non-military backing of the Government, including 500,000 doses of the Pfizer/BioNTech Coronavirus by next month and $5.2 million for a UN mission monitoring the October elections.