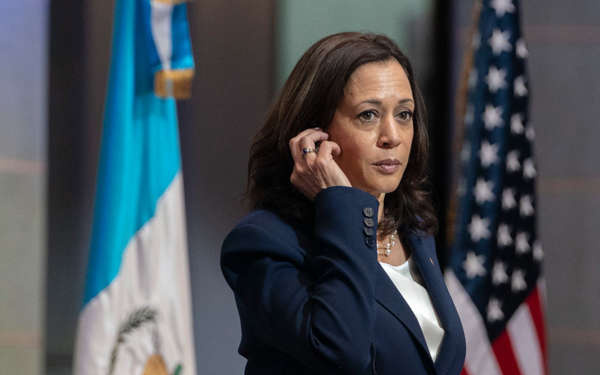 Ocasio-Cortez tweeted about Kamala Harris’s message to migrants on Monday, during a trip to Guatemala, “Do not come.”

The New York legislator wrote, “This is disappointing to see. First, seeking asylum at any US border is a 100% legal method of arrival. Second, the US spent decades contributing to regime change and destabilization in Latin America. We can’t help set someone’s house on fire and then blame them for fleeing.”

The Asylum Seeker Advocacy Project also challenged the Vice President, “Kamala Harris, seeking asylum is legal. Turning back asylum seekers is illegal, dangerous, & oftentimes sends them back to their deaths. Seeking asylum is a right under US and international law. #WelcomeWithDignity.”

ORIGINAL ENTRY, JUNE 8: Vice President Kamala Harris tells Central America’s migrants not to seek entry into the US, while pledging assistance to deal with local conditions.

Speaking in Guatemala, Harris spoke of how the US Government will bolster Central American economies and society to reduce the pressures for migration. She promised support of investigations into corruption and human trafficking in the country.

The goal of our work is to help Guatemalans find hope at home.

At the same time, I want to be clear to folks in the region who are thinking about making that dangerous trek to the United States-Mexico border: Do not come. Do not come. I believe if you come to our border, you will be turned back.

The Biden Administration has sought the repair of the US immigration system, retracting some of the Trump Administration’s “zero tolerance” measures against migrants. However, it faced the combination of a rise in migration from January and its predecessor’s emphasis on detention, separation of children from families, and denial of asylum.

In April, Customs and Border Patrol recorded more than 178,000 migrants seeking entry at the US-Mexico border in April, the highest one-month total in 20 years.

So Harris said most of those who cross the US border will not be granted residency. She emphasized legal pathways or protection closer to home countries.

And when they do leave it usually has to do with two reasons: Either they are fleeing some harm or they simply cannot satisfy their basic needs.

The Vice President announced that the Biden Administration will deploy Homeland Security officers to Guatemala’s northern and southern borders to train local officials. Meanwhile, the US will invest $48 million in entrepreneurship programs, affordable housing, and agricultural businesses, part of a four-year, $4 billion plan for Central America.

Rachel Schmidtke of Refugees International expressed concern that Harris’s statement undermined the right to seek asylum in the US.

But Guatemalan civil society leaders expressed support, saying Harris had learned a lot about the conditions driving migration since she met with them in a virtual roundtable in April.

“The messages we received from her were positive,” said Alvaro Montenegro, who is part of the JusticiaYa and Alianza por las Reformas. “The idea of giving importance to the fight against corruption sends the message that she’s on the people’s side opposite economic and political elites, where what they least want is to talk about corruption because they’re involved.”

In the mountainside village of Chex Abajo, Nicolás Ajanel Juárez said that until there is steady work, people will continue to migrate to the US.

The homes of many of the 600 residents were destroyed in two hurricanes. Corn crops have diminished as climate change extends the dry season. So many families in the village rely on remittances from relatives who have made it to the US.

It would be best if help can come directly instead of through government because that’s where it gets lost. Politicians don’t know because they don’t come here, to see with their own eyes the needs of the people.

Pledging Administration support for an anti-corruption unit in the Guatemalan attorney general’s office, she said, “We will look to root out corruption wherever it exists. That has been one of our highest priorities in terms of the focus we have put here after the President asked me to take on this issue of focusing on this region.”

The State and Justice Departments will train Guatemalan prosecutors and establish a task force to investigate corruption cases with links to Guatemala and the US.

Giammattei countered by dismissing accusations against him as “misinformation”.

The country’s Congress prevented a judge, a leading anti-corruption figure, from joining the Constitutional Court earlier this year. Giammattei supported the block.