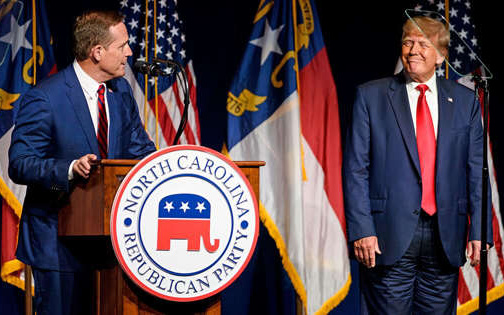 I joined the BBC’s Roberto Perrone on Monday to discuss the peril of Donald Trump causing further damage with a run for the US Presidency in 2024.

I warn that even talking about Trump feeds the spectacle of his disruption.

There’s a horror character called the Candyman, and if you say his name five times, then he shows up and terrifies you.

That’s where I am with Trump. If we stop paying attention to him, maybe these stories of “I’ll be back” and “I’m gonna get you” and “the election was stolen from me” — maybe we can push these aside and get on with real life.

But if we must evaluate him, then we should start with Trump’s challenge to take over the Republican Party by running loyalists against GOP incumbents in Congressional primaries in 2022 — and with the prospect that GOP legislators are already captive to him.

As long as Republicans keep bending the knee to him, either because they believe in what he says or — more likely — because they try to exploit him, yeah, he has a future.

We also separate reality from falsehood in Trump’s ongoing claims over Coronavirus, as he tries to deflect from his deadly mismanagement of the pandemic.

And we conclude, “Can America cope with another Presidential race by Donald Trump?”, with a positive answer.

This is a turning point, the most critical in generations. But it’s one in which Trumpian politics is not inevitable — there can be a more tolerant, more decent, and at the end of the day, better way for all of us.