US Reprimand to UK: Sort Yourselves Out on Brexit and Northern Ireland 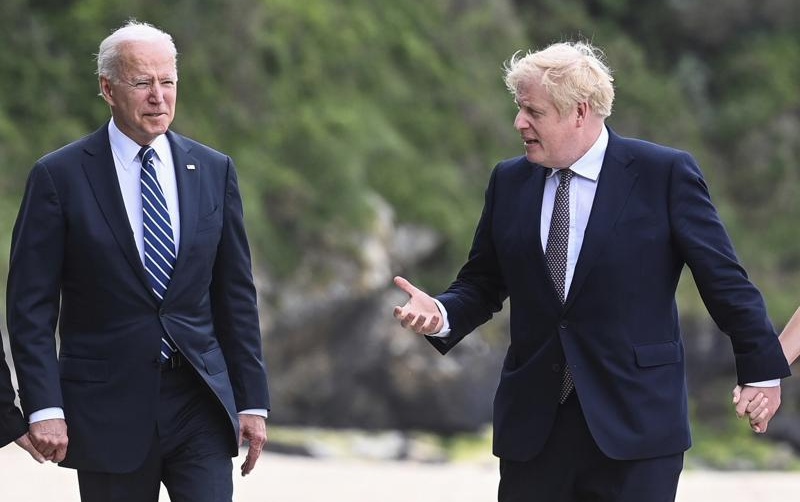 Alongside the first meeting between President Joe Biden and Prime Minister Boris Johnson, the US reprimands the UK over Brexit and the threat to stability in Northern Ireland and the Irish Republic.

The senior US diplomat in the UK, Yael Lempert, handed a diplomatic démarche — a formal protest — to the Johnson Government’s Brexit negotiator, David Frost. The note said London is “inflaming” tensions in Ireland with its threat to leave the Northern Ireland Protocol in the Brexit Agreement.

The Biden Administration said the UK should adhere to the rules on sanitary standards for movement of goods and animals between Northern Ireland and Great Britain, so this “wouldn’t negatively affect the chances of reaching a US/UK free trade deal”.

The story was broken by The Times of London after it was given UK Government minutes of the meeting.

The US démarche followed a pointed message by US National Security Advisor Jake Sullivan on Wednesday that President Biden has “deep” concerns about the threat to the 1998 Good Friday Agreement, signed after decades of inter-community violence in Northern Ireland.

Sullivan said the Northern Ireland Protocol is “critical to ensuring that the spirit, promise and future of the Good Friday Agreement is protected”. He urged the UK and EU to “work out the specifics” and “find a way to proceed that works for both”.

I’m not intending to send any warnings… [But] our concern does run deep. That is simply a statement of principle. That’s how the President feels about this issue.”

Calling Out The Johnson Government

The Northern Ireland Protocol established customs arrangements between Northern Ireland and the rest of the United Kingdom. It was fundamental to the Brexit Agreement by preventing a “hard border” between the North and the Irish Republic.

However, Prime Minister Boris Johnson has always been loathe to recognize, let alone uphold, the Protocol. During the campaign for the UK election in December 2019, he lied that there was no “customs line” down the Irish Sea. In September 2020, three months before the Brexit Agreement took effect, the UK Government sought a bill which would have broken the Agreement — and thus international law — unilaterally removing the customs arrangements.

Throughout 2021, the failure of the Government to put in customs infrastructure has led to disruption of production and trade in goods and agriculture between Northern Ireland reat Britain. The UK has blamed the European Union for not agreeing concessions, while Brussels has noted that British officials falsely promised that adequate customs preparations were in place.

In February, as UK trade with Europe plunged 68%, UK Cabinet Minister Michael Gove acknowledged that the issues were not just “teething problems”. He had been working with the EU’s lead negotiator Maroš Šefčovič to resolve the Northern Ireland issue.

But days later, he was replaced by Frost, who preferred a hardline position, as the UK negotiator. Britain immediately extended the suspension of customs arrangements for agricultural products and parcels.

Slouching Towards the Irish Sea: How the Johnson Government Chose Brexit Failure

Earlier this week, Frost again challenged the EU with the prospect of a unilateral extension for another six months.

The EU’s lead negotiator Maroš Šefčovič, while saying that he was “positive we can find a solution”, expressed frustration: “Our patience really is wearing very, very thin, and therefore we have to assess all options we have at our disposal.”

UK Trade Minister Greg Hands tried to play down the US démarche and turn the issue against the EU:

We agree with the fact there should be a negotiation…and we absolutely agree on preserving the peace process and the Good Friday agreement. But to do that, it does need a more pragmatic approach from the European Union in terms of how it interprets the protocol.

Hands rejected the US call for adherence to the terms on sanitary conditions, opposing “dynamic alignment” in which the UK accepts EU standards.

President Biden did not publicly raise the issue with Prime Minister Boris Johnson in their Thursday meeting in Cornwall in southwest England, before the start of the G7 summit today.

Instead, the men and their wives had a photo opportunity at the seaside. In a later press appearance, the US gave Johnson another headline with the signature of a renewed “Atlantic Charter”.

The original document, signed by President Franklin Roosevelt and Prime Minister Winston Churchill, laid out principles for the fight against the Axis in World War II and for a post-war international system.

The 2021 version pledges arrangements to ease travel between the UK and US amid the Coronavirus and pandemic, and measures to make it easier for British technology companies to operate in America.