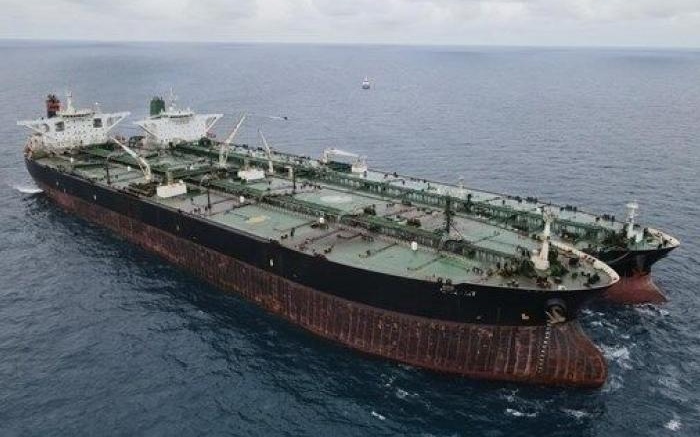 The Panamanian-flagged MT Freya was also held on Sunday. Coast Guard spokesman Wisnu Pramandita said the two tankers, with a total of 61 crew, are being escorted to Batam island in Riau Island Province for further investigation.

He said the vessels were “caught red-handed” during the transfer were there was a spill around the MT Freya as it took on oil.

The tankers, first detected at 5:30 a.m. local time, concealed their identity by not showing their national flags, turning off automatic identification systems and did not respond to a radio call.

Each supertanker can carry 2 million barrels of oil. They were last spotted earlier this month off Singapore. The MT Horse, owned by the National Iranian Tanker Company, was almost fully loaded with oil. The VLCC MT Freya, managed by Shanghai Future Ship Management Company, was empty.

Iran’s official oil sales dropped 80% to 95% from about 2.5 million barrels per day in April 2018, with an average assessment of about 300,000 bpd. There has been some recovery in recent months, but the extent is unclear: estimates for November ranged from 447,000 to 1.2 million bpd.

The analysts have also said that Tehran is trying to move oil covertly, bypassing comprehensive US sanctions imposed in November 2018. Chinese firms, which has officially limited their purchases, are suspected of continuing to take shipments.

Iran has also tried to ship oil to Venezuela and Syria, despite international sanctions, although it is unclear if Tehran has received any payment for the deliveries.

The MT Horse supertanker was sent to Venezuela last year with 2.1 million barrels of condensate.

On Friday, Iran’s Oil Bijan Zanganeh claimed Tehran’s exports have “substantially” increased, but he gave no numbers or details of customers.

The Rouhani Government has based its 2021-22 budget on exports of 2.3 million bpd.