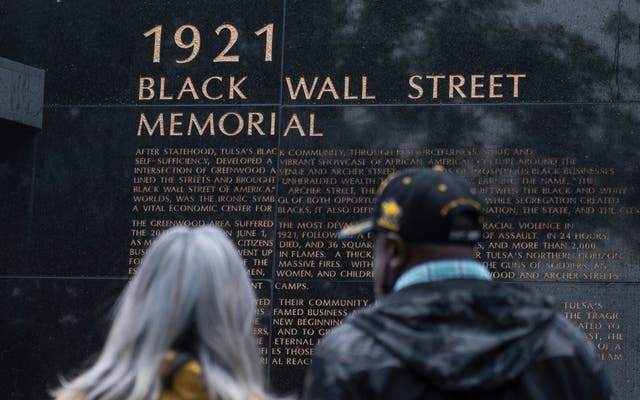 Joe Biden has marked the 100th anniversary of the Tulsa Race Massacre with a promise that the story of the killings “will be known in full view”.

Biden visited the Greenwood community, the vibrant “Black Wall Street” in which hundreds of people were killed and 10,000 left homeless on May 31 and June 1, 1921. Victims were shot indiscriminately and homes burnt after a Black teenager was accused of assaulting a white teenage elevator operator.

The President told an audience including three survivors and relatives of those who were slain:

For much too long, the history of what took place here was told in silence. While darkness can hide much, it erases nothing.

Biden described the killings in detail to emphasize, “My fellow Americans, this was not a riot. This was a massacre….We do ourselves no favors by pretending none of this ever happened.”

The Administration positioned Biden’s visit as part of a new emphasis on racial equity and justice.

On Monay, officials set out initiative for more federal spending to small and minority-owned businesses, fair housing enhancements, and repair of neighborhoods divided by transportation projects.

Yesterday Biden pledged to “fight like hell” for voting rights, saying he has directed Vice President Kamala Harris to lead the legislative effort: “This sacred right is under assault with incredible intensity like I’ve never seen.”

The House passed the For The People Act, which expands voting rights, change campaign finance laws, limit partisan gerrymandering, and create new ethics rules. However, Senate Republicans are blocking any consideration of the legislation

Meanwhile, the Georgia Legislature has passed a bill to limit absentee ballots and dropboxes, allow political officials to take over election boards, and turn the offer of food and water to voters waiting in long lines into a criminal act.

Florida adopted similar measures earlier this month. The Texas Senate rushed through restrictions last weekend, but a Democratic walkout prevented the House from confirming the bill.

Biden told the Greenwood audience of the voting rights initiative, “Today, I’m asking Vice President Harris to help these efforts, and lead them, among her many other responsibilities. With her leadership and your support, we’re going to overcome again, I promise you, but it’s going to take a hell of a lot of work.”

He concluded his remarks with a poem from Seamus Heaney:

History teaches us not to hope on this side of the grave. But then once in a lifetime, that long for tidal wave of justice rises up, and hope and history rhyme.