3 Candidates Drop Out on Eve of Iran Presidential Election 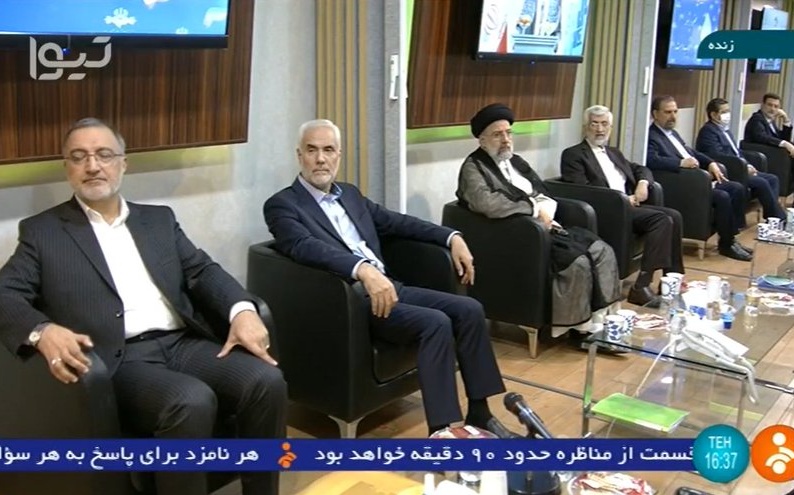 The only approved reformist candidate in Iran’s Presidential election on June 18 has dropped out.

The withdrawal of Mohsen Mehralizadeh, a former Vice President, is viewed as an attempt to boost support for the only centrist candidate, former Central Bank chief Abdolnasser Hemmati.

The other five candidates are conservatives and hardliners, including judiciary head Ebrahim Raisi, widely seen as the preference of the Supreme Leader’s office.

Hardline lawmaker Alireza Zakani, who was disqualified in 2013 and 2017 from running for President, dropped out to back hardline frontrunner Ebrahim Raisi.

“I sincerely thank my dear brother, Dr. Alireza Zakani, who decided to run in the election based on his revolutionary duty….Today he decided responsibly,” Raisi said

Compared to the first two widely-derided encounters, there was some substance in the last three-hour presentation. The format was changed to allow some interaction on the same topic, after the initial debates put individual questions to each candidate without any exchanges between the men.

The Supreme Leader’s office relaxed the injunction to focus on domestic issues and avoid foreign policy, permitting discussion of the Iran nuclear deal on the same day that a sixth round of talks opened in Vienna.

Hemmati criticized the hardliners for opposing the JCPOA, bolstering the Trump Administration’s imposition of comprehensive US sanctions. Addressing Raisi, he asked:

What will happen if power falls in the hands of hardliners? I have no reservation to say there will be new sanctions with more international consensus….

All this time you played in Trump’s court with your hardline actions.

Hemmati also challenged hardline opposition to Parliamentary ratification of accession to the Financial Action Task Force. The issue is complicating Iran’s effort to lift global restrictions on its financial and banking sectors.

Raisi said he is still committed to the nuclear deal, but the Rouhani Government was not “strong” in its negotiation of Iran’s position. He declared that the FATF does not guarantee “our nation’s interests”.

Saeed Jalili, a former nuclear negotiator, proclaimed, “The JCPOA is a bad cheque.” Mohsen Rezaei, the Secretary of the Expediency Council, said Iran must “flip the table over the deal and US sanctions.

Candidates also sparred over anti-corruption measures and support for marginalised Iranians. However, while some made sweeping claims, none gave details on substantive proposals.

The first half of the debate is over and we've got a 20-min recess.

On Twitter, the scene below is what many are talking about: ex-Central Bank chief Hemmati handing to Judiciary Cheif Raisi a list of top 11 people that he says have embezzled money from #Iran's banks. pic.twitter.com/B0Nf6c5z4X

Meanwhile, former Parliamentary Speaker Ali Larijani — one of 585 candidates barred by the Guardian Council — protested the disqualification. He said a Supreme Leader’s ruling entitles him to notification of cause, particuarly as the rumored pretext — that his daughter lives and studies in the US — turned out to be false.

The Council, whose members are named by the Supreme Leader and the judiciary, refused to give any reason in public. Spokesman Abas Ali Kadkhodaei tweets that disqualifications are “based on sufficient and reliable evidence and documents, and no provision has been predicted in the presidential election rule to protest”.

Mir Hossein Mousavi — widely believed to have led in the 2009 Presidential vote before officials, including the Supreme Leader, intervened to proclaim Mahmoud Ahmadinejad had “won” re-election — said he stands with those who can no longer stand “humiliating and engineered elections”.

Mousavi; his wife, academic and artist Zahra Rahnavard; and fellow 2009 candidate Mehdi Karroubi have been held by the regime under strict house arrest since February 2011.

The candidates — five hardliners, the centrist ex-Central Bank head Abdolnaser Hemmati, and reformist Mohsen Mehralizadeh — spoke for three hours. Analysts assessed that the discussion was even more boring and unproductive than the first encounter on Saturday.

And the second debate ahead of #Iran's presidential election concludes with absolutely nothing to help undecided voters pick a candidate.

In fact, after 360 minutes of debating (if that's what you can call it), undecided voters probably have more reason not to vote for anyone. pic.twitter.com/bLx5DdORJy

The hardliners, including judiciary head Ebrahim Raisi, attacked the Rouhani Government — trying to link Hemmati to the administration — without putting forward any substantial policy options.

The former bank head responded, citing US sanctions, “Some of you must send a letter to Trump and tell him, ‘Mr. Trump, be happy, everything you did against the people of Iran, we blamed on Hemmati’.”

Raisi, seen by many as the preference of the Supreme Leader’s office, chided the economic situation:

But his only proposal to address the crisis was “We strongly need the social asset”.

Mohsen Rezaei, the Secretary of the Expediency Council and a former Revolutionary Guards commander, criticized President Rouhani’s slogan of “Hope” — “You cannot eat hope” — without speaking about policy and implementation.

He denounced corruption without naming any specific individual or group, including the Guards, “Mafia kings are like vacuum cleaners and vacuuming up all the country’s resources.”

Mehralizadeh said the Health Ministry had been “negligent” in addressing the Coronavirus pandemic.

ORIGINAL ENTRY, JUNE 6: The seven men approved as Iran’s Presidential candidates have jabbed at each other in a three-hour televised debate.

The five hardline candidates, including favorite Ebrahim Raisi, slammed the performance of the Rouhani Government over the economy.

When former Central Bank head Abdolnaser Hemmati said the hardliners were to blame through elevation of tensions with the West, ex-Revolutionary Guards chief Mohsen Rezaei said he and other Government officials should face treason charges for “fully complying” with US sanctions.

Mr. Hemmati, your governance was catastrophic, you are sitting here as a representative of Mr. Rouhani….

If I become President, I will ban Hemmati and a number of other officials of the Rouhani Government from leaving the country, and I will prove in court which treacherous roles they played.

Hemmati asked judiciary head Raisi, “Can you give me assurances that no legal action will be taken against me after this event?”

He pressed his case against the hardliners, “You have closed off our economy and our foreign contacts….I ask you and your friends, companies and institutions to please pull out of our economy, and then Iran’s economy will surely improve.”

Hemmati: I was sacked from Central Bank by Rouhani because of my disagreements with him. But Rouhani was a much better politician than all of you guys

Reformist Mohsen Mehralizadeh, a former Vice President, said clerics such as Raisi cannot run the economy: “You have only six years of classic education, and while respecting your seminary studies, I must say that one cannot manage the economy and draw up plans for the country with this much education.”

Without setting out a plan for Iran’s economic crisis, Raisi continued to assail the Government, “This is like a goalkeeper who lets in 17 goals… and then says without me it would have been 30 goals!” He said one of the main problems was the “dishonesty of certain officials“.

The Government wrote to State broadcaster IRIB asking for airtime to respond to the “baseless and untrue allegations”.

And the first presidential debate in #Iran ends with a lot of words & very little substance. This will have done nothing to help undecided voters – if there even are any.

People who have already decided who they're voting for will not have been tempted to rethink their decision. pic.twitter.com/QKgVcbrS2i

On Friday, the Supreme Leader shifted his public position, saying the banned candidates were “wronged”. But the Guardian Council held firm over its disqualifications.

Despite the talks over the 2015 Iran nuclear deal, the Supreme Leader told legislators on Saturday that the three debates should only consider the economy.

I’ve heard it said that the candidates should discuss their views on social media and foreign policy in the debates. No, those aren’t people’s main problems. The main problems are other things, such as youth unemployment.